The Broadway Melody of 1936 made a star out of Eleanor Powell, and in 1937 she was at it again with The Broadway Melody of 1938, which, unfortunately, was a flaccid follow-up to its predecessor. This time Powell is the daughter of a horse rancher who wants to break into show business, and once again Robert Taylor is a producer who’s casting a new show. Buddy Ebsen returns as well, minus his wonderful sister, Vilma. Oh, and Dr. Wildhack is back again too, only this time he sneezes. Isn’t that swell?

Another thing that made this installment in the series unique is that it’s one of the first film appearances of a young hopeful by the name of Judy Garland. Like Eleanor Powell, Judy would go on to be a star, but that’s another story. 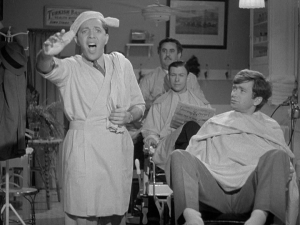 First of all, though, we go to a barber shop, where an uncomfortable Peter (Buddy Ebsen) is being serenaded by barber Nicki (Charles Igor Gorin) crooning “The Toreador Song” from The Barber of Seville.

Peter and his buddy, Sonny (George Murphy) want to get back on the stage, only they’re going to go at it from an angle. They’re pretty good at calling which horses are going to win races, so they decide to run up to Baltimore. Sonny wants to get a job as a groomsman for ice cream bar magnate, Herman Whipple (Raymond Walburn), who married a former showgirl, Caroline (Binnie Barnes). They borrow eight hundred dollars from Nicki’s uncle George (Billy Gilbert) and zoom on up there, where Sonny is a shoo-in. 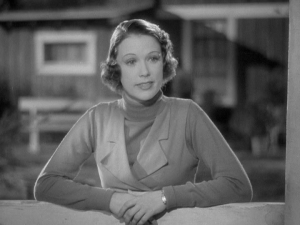 Only problem is, Sonny’s skills as a sports commentator don’t really work into actually knowing how to care for horses, and when he’s bathing the injured leg of a horse named Stargazer, pretty lady Sally (Eleanor Powell) starts giving him tips. She takes it upon herself to show him how. Fortunately, Sonny learns fast.

On the Whipples’ private train to New York, Peter and Sonny are in the stable car sacked out for the night when they find Sally stowed away. She’s there to keep an eye on Stargazer. And break into show business, of course. Luckily for her, she meets Steve Raleigh (Robert Taylor), who’s in the club car playing a song he’s written, and he’s so impressed with Sally that he wants to put her in his new show. All she has to do is come see him at the Hamilton Brown casting office in New York. 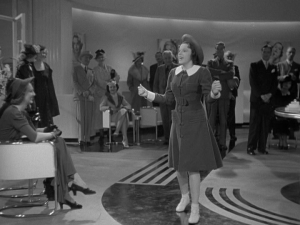 Steve is a guy who’s in great demand–Hamilton Brown’s casting office is always packed. One of the fixtures in his office is Alice Clayton (Sophie Tucker), a former Broadway star who wants to put her daughter, Betty (Judy Garland) into show business. The rather snooty receptionist, Jerry (Barnett Parker) is dismissive until Betty belts out “Everybody Sing” and gets the whole crowd warbling along. However, Alice and Betty have to wait around like everyone else, and eventually settle for leaving a card. If Jerry wants to find them, he can call Alice’s boardinghouse, where a gaggle of out-of-work actors eat her out of house and home. Off to the side is Dr. Wildhack and his many sneezes, but we’re not going to go there.

The Whipples, who are backing Steve’s show, aren’t happy that he’s cast an unknown in the lead, and unless Sally is out they’re going to pull their money. Sally is disappointed, but she’s got a side project of caring for Stargazer with money Steve got on loan from Mr. Whipple. He had George give the money to Sally without telling her it was from him, so George fudges out an excuse about Bank Night. He asks Sally if he can work for her for free because he quit his job at the Whipples. 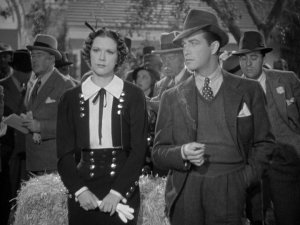 Since Sally knows Steve is without funding, she cooks up a scheme to get the money for the show. There’s a steeplechase coming up in Saratoga, and she’s positive that Stargazer can win. Peter used to be a jockey, and he’s volunteered to ride.

Sally’s instincts appear to be wrong until Stargazer hears Nicki singing opera, which is like Dumbo finding his feather. As long as Nicki sings, Stargazer will blow away the competition. It all culminates in a very long rendition of “Figaro,” and a triumphant show that features pretty much anyone in the movie who can sing. No, that’s not a spoiler. I don’t think spoilers are possible here. 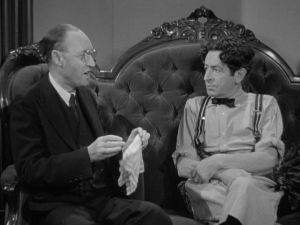 Oh golly, this movie. It’s dated. It’s weak. It didn’t do too badly at the time of release, but the 1935 Melody was miles ahead by comparison. In lieu of big names, the 1935 production numbers were impressive and the story more than passable. MGM brought its A-game in every way there.

Two years later, the 1937 Melody not only phoned it in, but put everyone on speaker while it played solitaire, or it would have if speakerphones existed in the thirties. There’s very little Broadway, as the bulk of the film has to do with turning Stargazer into a world class jumper. Except for the nice tracking shots in the “Follow In My Footsteps” number in the stable car, all of the wonderful camera work we saw in the 1935 film is gone as well. The camera is pretty stationary in the finale. Overall, it’s boring. 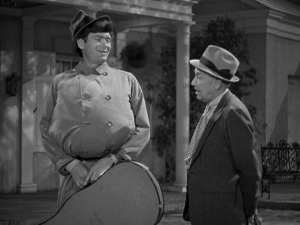 And it was kind of ludicrous having six-foot-three Buddy Ebsen as the jockey in the steeplechase, even if he could ride. On the plus side, it did give him something to do before the big finale, but other than that his character is just kinda there. Well, he does nip feed from the Whipple stables, but yeah, he’s pretty much a nonentity.

George Murphy’s Sonny is woefully undeveloped as well, because there’s no reason for this character to exist except that he dances with Sally and provides a corner of a half-hearted love triangle. 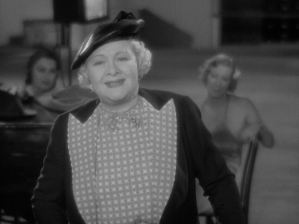 What I wish this this movie could have done is build on the “Your Broadway and My Broadway” theme. Have Sophie Tucker and the younger actors compare and contrast how Broadway changed between Tucker’s generation and that of the thirties, with some older numbers worked in.

Seeing as Alice’s boardinghouse had all those out-of-work actors in it, it wouldn’t have been much of a stretch for these people, including Sally, Peter, and Sonny to sit around one night eating popcorn and talking about Broadway. Then…voila, someone gets up and starts singing. This would have been a completely natural angle for the movie and the final minutes might have made more sense that way. As it is, the finale feels like a twenty-minute walk-down, even if it is fun. 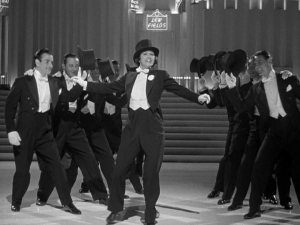 Now, 1938 does have its good points. When Eleanor Powell dances, the movie feels fine because she was amazing, and this time around she worked a bit of legomania in. I wish there had been more scenes of her dancing with Ebsen and Murphy, which is another angle the movie might have explored and didn’t. Since Sally was green though talented, Sonny and Peter could have mentored her. Sigh.

Judy’s scenes are minimal as well, but as a newer face in the movies this may have been expected. Her performance must have been arresting to audiences in 1937, who probably marveled at a fifteen-year old having such a mature voice and presence. Broadway Melody was the last time Judy would be in the background of any movie, as she went on to make Thoroughbreds Don’t Cry with Mickey Rooney. What she does in Broadway Melody is a harbinger of who she became in film–she’s one of the best parts of a lackluster movie. 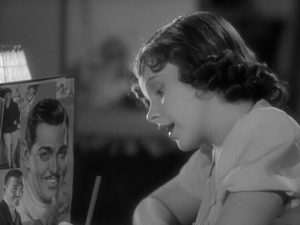 What’s mind-boggling is that today’s critics like it. Even in 1937, the usually hard-to-please Variety said that the film was “much better than its predecessor.” Huh? What movie did they watch? I don’t get it, but oh well. These critics are outliers, though, as the majority of reviews at the time of release praised Judy Garland and ignored the rest. This assessment has won out in the ensuing decades. If anything, The Broadway Melody of 1938 can be enjoyed for the treat of seeing Judy before she was a big star and nothing else.

More Broadway can be found here. Thanks for reading, all, and see you tomorrow…

The Broadway Melody of 1938 is available on DVD from Amazon.

7 thoughts on “Broadway Plays the Ponies”