We’re still in Texas, only our hero now has the accent and a shotgun on his knee. I give you Michael Caine in 2003’s Secondhand Lions.

The film opens with two old men flying a biplane around a wide stretch of Texas prairie. Actually, it’s more like joyriding than flying. They even barnstorm an overpass and wake up a sleeping police officer. These guys are whooping and hollering and having a ball. Then it cuts to a young man (Josh Lukas) sitting at his desk drawing a comic strip, when his phone rings. “Walter, I’ve got some bad news. It’s about your two uncles,” a male voice says. “Walter? Walter?”

Too late. Walter is now lost in memories of when he was a teenager (played by Haley Joel Osment) and his mom, Mae (Kyra Sedgewick) took him to stay with his great-uncles. She’s supposedly bound for the Forth Worth College of Court Reporting, and she wants Walter to get to know his family better. Coincidentally, these two uncles have got millions stashed away somewhere. Even more intriguing, no one knows how they acquired the money because they were both away for forty years. Rumor has it the brothers won the money from lawsuits after being in the nuthouse. Mae and Walter might be the closest family they’ve got. Funny, that. 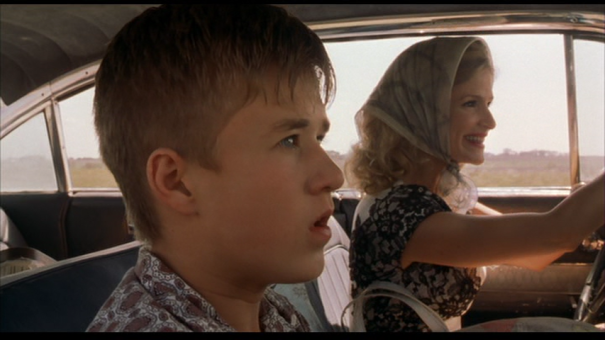 After some not-so-gentle hints to her son about finding the secret fortune, Mae and Walter get close to their destination, marked by signs bearing subtly welcoming messages like “Loose rabid attack dogs and a pig.” and “Turn Back Now.” The house isn’t much more promising–it looks as though it hasn’t been painted since the day it was new.

No sooner than Mae and Walter get out of the car than those rabid attack animals they’ve heard tell about come barreling at them, only they’re more playful than anything. Meanwhile, those dear, long-lost uncles are busy fishing in the nearby lake. With shotguns. Mae wastes no time in getting out of there, leaving her rather bewildered offspring in the hands of Hub (Robert Duvall) and Garth McCann (Michael Caine). 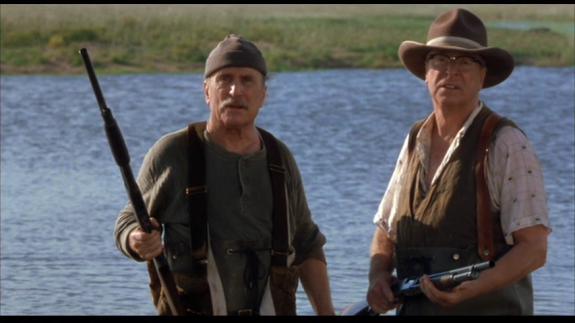 To say these guys live life on their own terms is putting it mildly. Their favorite evening pastime is sitting on the porch with a pitcher of iced tea and their trusty firearms across their laps. Walter wants to know if he can watch TV, but Hub and Garth don’t have one. Walter is aghast until he sees that TV is unnecessary in the McCann world, and why? They get visitors. Lots of visitors, mostly salespeople, who want to part the brothers with their millions. It’s annoying, but nothing that a shotgun fired into the air can’t fix.

Walter has to sleep in the attic bedroom, which is full of tatty Eastlake furniture and piles of dust. When he plops his suitcase on the rickety old bed, clouds of dust waft up. Walter pulls out his toothbrush and warily goes at his teeth, looking around him nervously, but eventually curiosity gets the better of him and he starts puttering around. He manages to unlock a chest that’s full of sand, and after sifting through it he finds a photo of a beautiful Middle Eastern woman, which sets the wheels in Walter’s head turning. 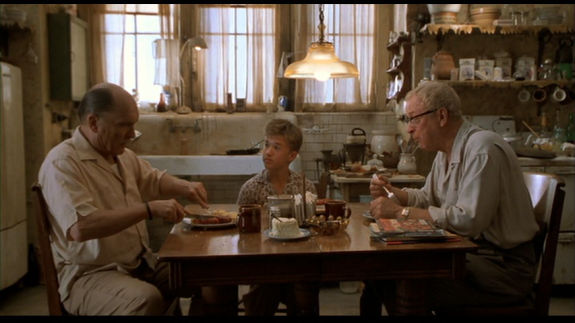 A loud bang startles Walter out of his musings, and he looks down to see Hub in his nightshirt, walking through the yard with a plunger on his shoulder like a sword. He’s clearly sleepwalking, and Walter follows him down to the lake, where he finds Hub fighting with an unseen foe. He, the dogs, and the pig sit off to the side watching the spectacle in disbelief, and finally Walter falls asleep. He wakes up the next morning with wet sand on his face, and goes into the house for breakfast, where he awkwardly tries to make conversation.

Salespeople aren’t the only ones who call on the McCanns. A couple named Ralph (Michael O’Neill) and Helen (Deirdre O’Connell), plus their three children, like to show up now and then to stay with the brothers because that’s what families do. These folks might be relatives, or just sponges, probably both, and they’re really not happy to see Walter. Ralph goes so far as to say Walter belongs in an orphanage, at which Walter takes off running and doesn’t stop until he gets to a pay phone. Naturally, he calls the Fort Worth College of Court Reporting, where a kindly secretary tells him there’s no one by his mother’s name registered. She couldn’t possibly have just enrolled either, as school started in January. 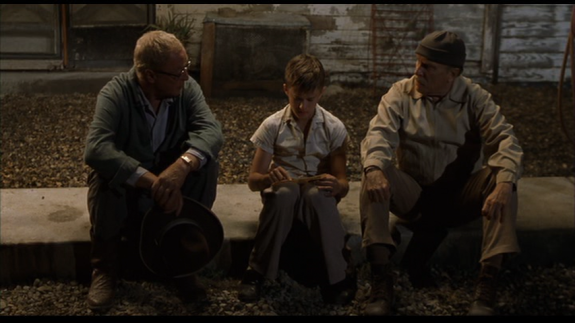 Walter is crushed, and makes up his mind to go to Montana. Hub and Garth find him, however, and convince him to come back with them. If anything, his presence will make Ralph and Helen mad. This seems to sway Walter, who tells his two uncles that he’s been to the orphanage before, and would rather walk to Montana than go to another one.

The bottom line with Walter is that he’s a scared young man who desperately wants to believe in someone or something, and he’s never had strong adult role models that he can look up to. Mae is a liar and a flake who cares more for herself than considering the needs of her child, and Walter has had to bear the brunt of her bad decisions. Hub and Garth may be mysterious and eccentric, but he learns to depend on them. What’s more, he learns what it means to be a man. 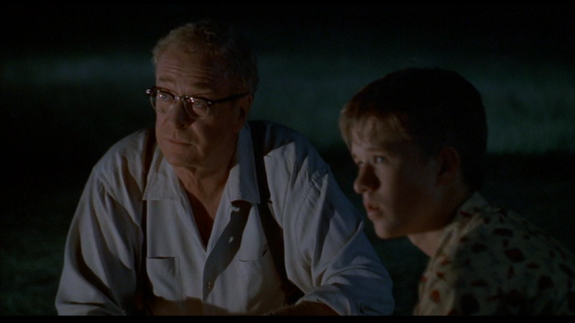 To add icing to a very tall cake, there are surprises galore. Everything that Walter sees is gradually explained, mostly by Garth, who has accompanied Hub on countless adventures. The two of them as young men went to Morocco in 1914, and as Garth put it, “stayed one country ahead of the Germans.” An unscrupulous night of drinking results in their being shanghaied into the French Foreign Legion, but the experience gives them both purpose and helps them to grow up.

After the war, the brothers temporarily went their separate ways–Hub became a bounty hunter, and Garth led safaris. The former becomes well-known as a man who fights as if he were twenty soldiers, which intrigues a Moroccan princess named Jasmine. “I must meet this man,” she says, only she says it in Garth’s Texas twang. Garth doesn’t let Walter in on all the details at once, but lets the story unfold gradually as Walter is ready. 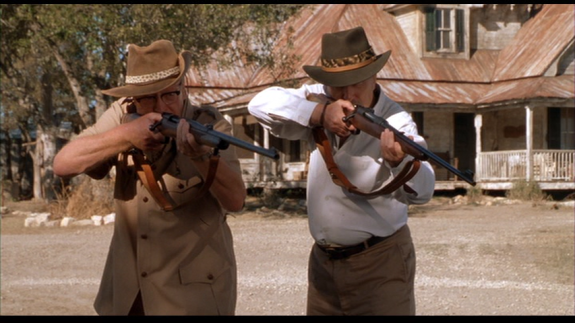 The surprises in Secondhand Lions aren’t solely of the storytelling variety. At Walter’s urging, Garth and Hub start having a little fun with their money. Among other things, they buy a skeet shooting machine, which is a totally natural purchase for two guys like them. They also attempt to plant what they think will be a full kitchen garden, only to find that they’ve got a new cornfield. It’s good, though, because corn is yummy, plus it comes in handy as a jungle for the lioness.

Yes, a lioness. Hub and Garth get it into their heads that they want to relive their Africa days, so they buy an old lion from a circus, thinking they’ll have a little sport. The scheme goes to pieces, though, when their quarry looks at them and burps. She’s old. She’s going with the flow. And the cornfield looks pretty inviting. As an added bonus, she keeps Ralph and Helen from hanging around. Naturally, Walter names his new pet Jasmine. 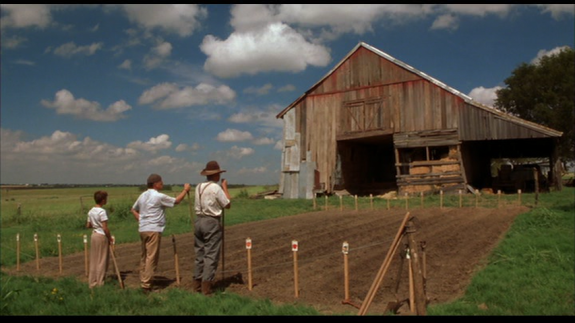 As the summer goes on, Walter develops confidence and comes to terms with growing up. Meanwhile, Hub and Garth are coming to terms with growing old. Garth seems to be ahead of Hub in that regard, though: “A man’s body can grow old, but inside his spirit can be as young and restless as ever.”

Michael Caine plays Garth with a quietness that belies how strong his character really is. He is his brother’s keeper. It might seem like Hub is the dominant one, but Garth is always there to remind Hub of what he needs to be doing. During their Foreign Legion days, Hub promised Garth he would protect him. Now that they’re old men, the shoe is on the other foot. When a group of punks tries to rough up Hub at a barbecue joint, Garth keeps things from getting out of hand, standing off to the side with the ever-present shotgun while Hub shows these wannabes how it feels to have their something-or-other handed to them. “Just don’t kill ’em,” he reminds Hub. 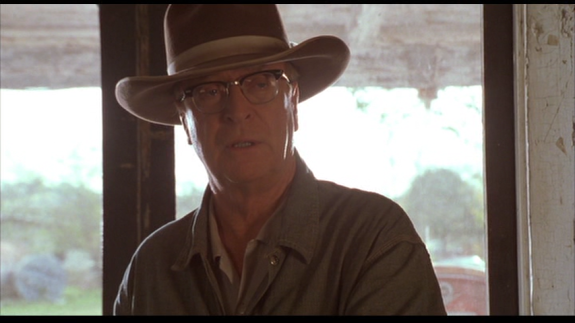 Spoiler alert: The hoodlums live to tell the tale, but just barely. 😉

Secondhand Lions is a truly memorable film, which I’ve only scratched the surface of. Michael Caine and Robert Duvall are believable as brothers. Haley Joel Osment holds his own, but also relates to Caine and Duvall as someone who can’t believe he gets to work with these formidable talents. The film is fun, and most importantly, leaves viewers with a lot to think and talk about.

For still more Michael Caine, well, Gill‘s got you covered. Thanks for hosting, Gill, this was fun! And thanks for reading, friends. Check back tomorrow because I have a major announcement to make. Really, don’t miss it. See you then…

This film is available from Amazon.

9 thoughts on “They Really Lived”