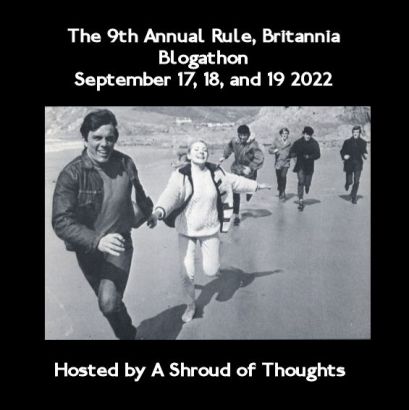 We all know 1964 was a huge year for the Beatles. Their careers and collective fate suddenly shot to the top. They made two appearances on The Ed Sullivan Show. They toured America for the first time. John wrote and published In His Own Write, which he also promoted on a book tour. And they made A Hard Day’s Night, a fast-moving, fast-talking race of a movie that had the band doing what it did best.

The plot of this film is extremely simple, as in there isn’t really a plot. It takes place over thirty-six hours and centers on John, Paul, George, and Ringo heading to their next concert. Inevitably the whole business resembles a Family Circus cartoon because there are plenty of twists and turns. The guys have to dodge crowds of fans rushing at them. And women ogling them. And screaming at them. Everywhere they go. They do make it to the concert, of course, which is also a live TV broadcast directed by a frazzled guy (Victor Spinetti) in a very fuzzy sweater, or “jumper,” as the Brits say.

In between dodges they engage in various antics, some of which are aided and abetted by Paul’s grandfather (Wilfred Brambell), a very clean man with a secret rebellious streak. This guy thinks nothing of giving his grandson and his grandson’s bandmates the slip. Even when he’s been told to stay in the band’s suite, Grandfather cons one of the hotel staff out of his white tie and tails, after which he leaves the poor guy in the living room reading Fabulous On Film while he sneaks down to the casino to place a few bets at the craps tables. Grandfather is a wild and crazy fella.

So why is this film worth seeing or re-seeing? Here are a few of my reasons:

The music, of course.

There’s a lot of it, natch, and the band plays it anywhere they can, from the baggage car of the train to back rooms to rehearsal halls to the set of their TV show. According to McCartney biographer Peter Ames Carlin, John Lennon and Paul McCartney each wrote songs for the film in their spare time, but there are a few previous hits such as “She Loves You” as well.

All the guys got in on this but John got the lion’s share, probably because he was a natural troll. I’m not going to ruin anything because the element of surprise is essential. Suffice it to say, anyone who likes dry British humor will be very happy.

It’s the Beatles after they got big but before they got road-weary.

It might not seem apparent because there’s something happening all the time, but for the most part the Beatles were very confined in this movie. Everything happens in hotel rooms, dressing rooms, rehearsal halls, the TV studio, the train, the towncar. They talk to each other, the press, and only occasionally to people on the street.

And every one of the Beatles did whatever they could to escape as much as possible. In the “Can’t Buy Me Love” scene, the band sneaks down a fire escape and Ringo yells, “We’re out!” There doesn’t seem to be much acting going on in that moment. Legend has it the Beatles at this stage in their career enjoyed sneaking out by themselves whenever they could, hence the genuine joy at cutting up capers in an empty field.

As we’ve already seen, Grandfather isn’t a fan of this caged existence, either. He brusquely tells the group while they’re getting made up for their show, “I thought I was supposed to be getting a change of scenery, and so far I’ve been in a train and a room, and a car and a room, and a room and a room. Well, maybe that’s all right for a bunch of powdered gee-gahs like yourselves, but I’m feeling decidedly strait-jacketed.”

A Hard Day’s Night had a very low budget but it doesn’t look it. There’s a lot of motion and care taken to how each scene is filmed, and since most of the scenes took place in real locations, it seems fancier than it is. It’s hard to tell sometimes how much is ad-libbed and how much is planned.

It also looks like a music video. Director Richard Lester didn’t invent the music video, not even close, but he helped bring the art form closer to what we recognize today, incorporating the Beatles’ natural charisma and quirk. He also seemed to enjoy having them fly through the air, such as, again, in the “Can’t Buy Me Love” scene and the backgrounds of the TV show set.

The movie might all seem lightweight, plot-wise, and it is, but A Hard Day’s Night has its own brand of meat. The rushing, screaming crowds were real. The press corps was mostly real.  A scene in which Ringo trudges along a river bank and unsuccessfully tries to take a selfie is real (He came to work one day straight from a nightclub). Screenwriter Alun Owen hung out with the band and imitated each member’s personality and way of speaking in the script. Like the Beatles’ real life, a lot of the film was done on the fly and it couldn’t have worked any other way.

A Hard Day’s Night is fun. The film is often called a mockumentary but it’s more like guerrilla filmmaking and is a cool look at the Beatles in their early days as megastars.

For more Britannia, please feel free to see Terence at A Shroud of Thoughts. Thanks for hosting, Terence–this was great! Thanks for reading, all, and I hope to see you on Tuesday for a new installment in the ‘During World War Two’ series…

A Hard Day’s Night is available on DVD and Blu-ray from Amazon.