The teen years are awkward enough, but for Shirley Temple they must have been downright painful, because after her 1940 film, The Blue Bird flopped she was at loose ends as an actress, ending her contract with Fox and trying to figure out what to do next. She made one movie at MGM, Kathleen, which didn’t grab people, and in 1942 she made Miss Annie Rooney, an independent film for Edward Small Productions.

Annie is a typical teenager (for the time, anyway), who spouts the latest lingo, gets dreamy over Pygmalion and has dance parties with her friends. Her family is comfortable but not exactly well-off, and her dad, insurance salesman Tim (William Gargan) is always looking for something to make them more money. His latest would-be venture is rubber made from milkweed, which he’s sure is going to be the next big thing because there’s a war on and rubber is scarce. Grandpa (Guy Kibbee) disagrees, as he’s already put rainy day money into Tim’s schemes. 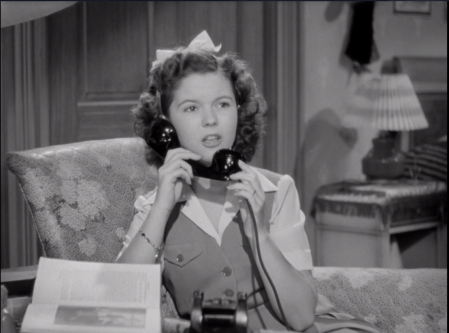 In fact, Grandpa is worried because Tim is a little flakey and the rent is three weeks overdue. Grandpa has to put in his last thirty-five dollars to pay for it and there won’t be any more money until his policeman’s pension check shows up. 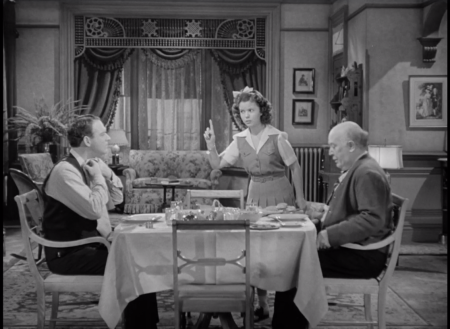 Marty picks up Annie’s lingo pretty quickly, not to mention the art of the jitterbug, even though Annie and her best friend, Myrtle (Peggy Ryan) aren’t sure about him at first. Much to Joey’s jealousy and Marty’s parents’ chagrin, Annie and Marty start dating, and Marty invites Annie to his sixteenth birthday party. Problem is, Tim has lost his job and Grandpa has to take out a loan on his policeman’s pension to pay for it, but Annie is so happy they don’t want her to know the family is in trouble.

Unfortunately Marty’s friends and parents are snobs who make Annie feel like pond scum. Well, at least they do until Annie schools them on how to jitterbug, and after that they loosen up just fine. 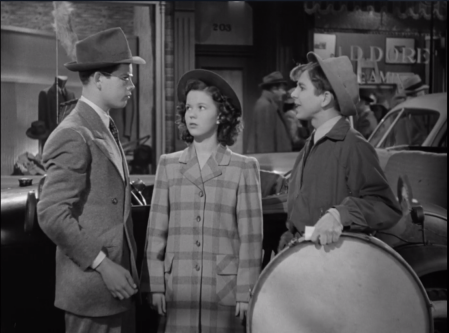 Also unfortunately Tim’s hawked the furniture so he can make a payment on his milkweed idea, and he’s a little desperate. While Annie and the rest of the kids watch Marty blow out his birthday candles, Tim is on the way to the White penthouse with a meat grinder and a bunch of milkweed. Things could get awkward, not to mention bleak, before they get better.

Miss Annie Rooney is a cute movie overall. It’s significant in that it’s the movie in which Temple received her first onscreen kiss, a moment made all the more awkward by the fact that it was also Dickie Moore’s first kiss ever. The scene is incredibly awkward but on a level it works because it plays to how innocent these characters were. 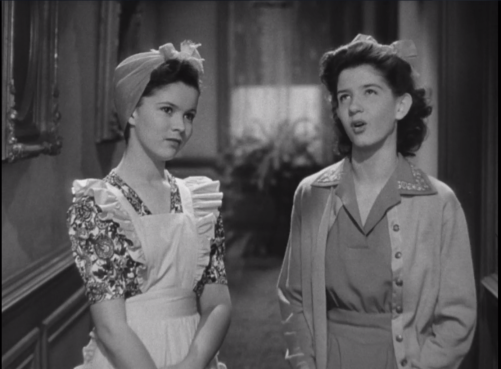 I don’t know if teens really acted like this during the early forties (maybe they did?), but it’s fun to see these characters interacting and comparing notes over their latest reads and throwing their knowledge around as only teenagers can. Annie trills in French to her Irish grandpa and everyone smiles because it’s all winsomely pretentious. And she and her friends use so much nineteen-forties slang they almost need subtitles.

However, our heroine does get a pretty hefty reality check because she’s no dummy. She knows her dad has made some bad decisions and that her dad and grandpa have been arguing, so she’s not going to let them forget their flubs when the repo guys show up. The only thing I kept waiting for her to say was that she was going to quit school and go to work, which did happen back then, but things never quite get to that point. 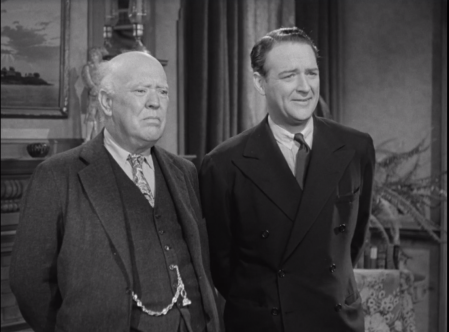 The only thing I would say is that the film’s plot is a little thin. Once Tim plops the meat grinder down on Marty’s birthday table and starts cranking milkweed, things wind up pretty quickly. It’s nice that these characters succeed, but it feels a little too easy. It also feels like they were trying too hard. The Rooney landlady, Mrs. Metz (Mary Field) keeps popping in for any old reason and her intentions are obvious. She’s got apple pie for their dinner. She can give Annie advice like a mother. Whatever. She’s very amiable until the rent comes due and then she turns into a bulldog. When she disappeared in the last quarter of the movie I didn’t miss her.

Maybe the public thought the movie was trying too hard as well, because Miss Annie Rooney flopped at the box office, bringing in $36.1M in adjusted box office revenue, and Temple wouldn’t make another movie for two years, which, incidentally, she wasn’t too broken up about. To this day Miss Annie Rooney ranks dead last in Temple’s filmography. 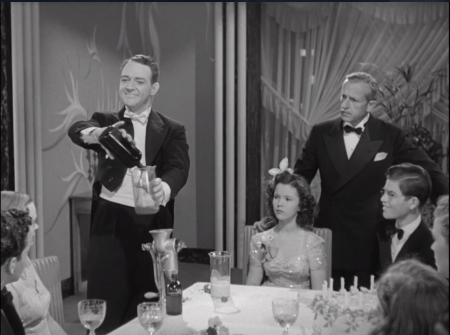 The reviews at the time were decidedly mixed to negative as well. J.W. Stepp of Washington D.C.’s Evening Star said, “Mr. {Edward} Small’s and director Edwin L. Marin’s sensible engineering feat is actually not the loathsomely coy product its title, Miss Annie Rooney would indicate…Even the film’s stark naïvete will not be found other than completely fitting to Miss Temple’s personal charm.”

The New York Times staff was much less diplomatic:

Gingerly, very gingerly, producer Edward Small is breaking the news to the public—baby Shirley doesn’t live here any more…She even is allowed to register slight comprehension when young Dickie Moore—tchk, tchk!—places a tentative peck on her left cheek. Miss Temple seemed impressed, the folk in the Rivoli balcony just depressed. For “Miss Annie Rooney” is the kind of show that makes indulgent souls feel much less kind toward children. 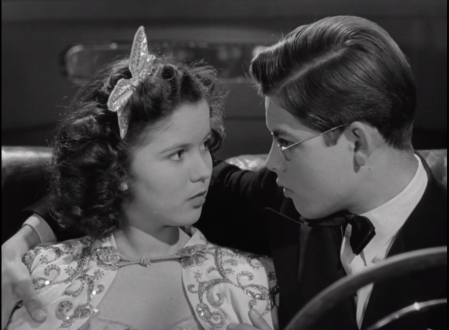 Seen today, the film isn’t completely unwatchable, although there are better Temple movies out there. I think it all comes down to expectations.

Another post is coming up on Friday. Thanks for reading, all, and I hope to see you then…

Miss Annie Rooney is available on Blu-ray and DVD from Amazon. It’s also free to stream on Tubi.

~Purchases made via Amazon Affiliate links found on this site help support Taking Up Room at no extra cost to you.~are