Amidst all the capes, spandex, super powers, super weapons, and super heroes is the relatively unappreciated and underrated Dick Tracy. Sharp of chin and nose. Inscrutable stare. Cool head. Laserlike focus on rooting out crime and corruption. Always with the bright yellow fedora and the trench coat. And let’s not forget Tracy’s uber-cool two-way wrist communicator. The character is at once timely and timeless, standing against the forces of evil even though it might seem like a losing battle.

Dick Tracy was first conceived by cartoonist Chester Gould in 1931 but not without a struggle. It was the sixty-first story idea Gould submitted to his publisher and originally called “Plainclothes Tracy,” which was then shortened to “Dick Tracy.”

And just because there’s always someone out there who may have other ideas, not to mention search engines are funny creatures, in the nineteen-thirties, “dick” was slang for “policeman.” The few dirty minds who read this may exit the gutter now, please and thank you. Moving on…

Chester Gould was born in Pawnee, Oklahoma in 1900, and from the beginning he showed a talent for art. At seven he was copying comic strip art and had his first strip published. At eight, his drawings of local politicians hung in the window of his dad’s newspaper office, and while in high school he was drawing yearbook art for Oklahoma A&M and political cartoons for the Tulsa Democrat.

Gould’s career was a whirlwind of activity after he graduated from Northwestern in 1923. He started out as a freelancer, working for papers all over Chicago drawing not only comic strips but art for advertisements and politics. While he sold a few comics to various outlets, including Hearst Publications, his dream was to author a major strip.

Captain Joseph Peterson showed interest, but not too much, and for a decade Gould sent him possible comic strips. The Captain didn’t nibble, though, until Gould sent him “Dick Tracy.” The strip fell right smack in the overlap years between Prohibition and the Great Depression, when corruption was rife and G-men stories were huge.

What inspired the “Tracy” series, though, was Sir Arthur Conan Doyle’s Sherlock Holmes. According to the Dick Tracy Wiki, Gould was listening to a Sherlock Holmes radio show while reading about Al Capone in the newspaper, and suddenly he saw Capone as a Moriarty in need of a Sherlock Holmes. Daughter Jean remembered that the first person he shared his brainstorm with was her mother, Edna, and the two of them talked about it for hours before finally saying good night. Gould always valued his wife’s input, and he was so excited about this particular idea he stayed up after she had gone to sleep and drew the very first Dick Tracy strips. The debut installment appeared in the Chicago Tribune on October 4, 1931.

To say the series was a huge hit is putting it mildly. It wasn’t just Dick Tracy’s crimefighting abilities that drew people, but the large assortment of wildly featured villains. Some were based on movie stars, some were based on real crooks, and some were based on regular celebrities. That’s not to say the good guys didn’t have a shot, though–there was always the question of whether or not Tracy would settle down with the ever-faithful Tess Trueheart. People flipped to the newest strip every day with bated breath, and no doubt they’d be amazed to know that Gould was making things up as he went along. He didn’t like planning too far ahead.

Unlike other G-men properties, many of which went out of fashion once America moved out of the 1930s, Dick Tracy was able to stick around. Gould made tiny changes to the comic, such as the technology used, that kept the series relevant while keeping it true to itself. Well, mostly–in the sixties, Tracy takes a trip to the moon.

Naturally, Tracy was ripe for parody, and few came off as memorably as “Dick Tracy In B-Flat,” an episode of the Armed Forces Radio Service series, Command Performance, that was broadcast on February 15, 1945. Among other Golden Era stars, it featured Bing Crosby as Dick Tracy, Dinah Shore as Tess Trueheart, Judy Garland as Snowflake Falls, and Bob Hope as Flattop. It’s well-worth a listen, and not only because it’s one of the few times Judy sang opera or at least an approximation of it.

Of course, Dick Tracy had his time on the big screen (see a complete list here). In 1937 he got a series, kicking off with “The Spider Strike.” These shorts and one-hour films boasted respectable casts including Robert Byrd and later Morgan Conway as the title character and Francis X. Bushman as Chief Clive Anderson.

They were very low-budget (the first episode plays Mahler as opposed to an original score), but they were a lot of fun. My personal favorite is Tracy’s 1945 outing, where he goes after Splitface. I won’t ruin anything, but I think it’s really cool.

Enjoyable as they are, and OG as they are, they pale in comparison to the 1990 film starring Warren Beatty, Glenne Headly, Charlie Korsmo, Al Pacino, Madonna, Mandy Patinkin, and a host of other actors, many of whom are unrecognizable underneath heavy makeup and prosthetics. I used to love this film when I was in middle school; in fact, I saw it in the theater twice–once in Auburn at the State Theatre and once in Oakhurst on the way back from a trip to Disneyland. I even had Tracy’s yellow fedora, and yes, I wore it to school sometimes, but only on Halloween.

The film holds up extremely well today, and I don’t think that’s just nostalgia talking. The look of the movie is ripped straight from the comics, with a flat, bright aesthetic in both scenes and costumes even when it’s the dead of night. Madonna as Breathless Mahoney brought a lot of sleaze and sexual tension. Headly as Trueheart is a delight. The villains are oddly menacing despite their odd appearances. And Beatty is absolutely awesome. He not only embodies the character’s inscrutable charm, but he gives him a bit of suitable awkwardness now and then which serves Dick Tracy well. 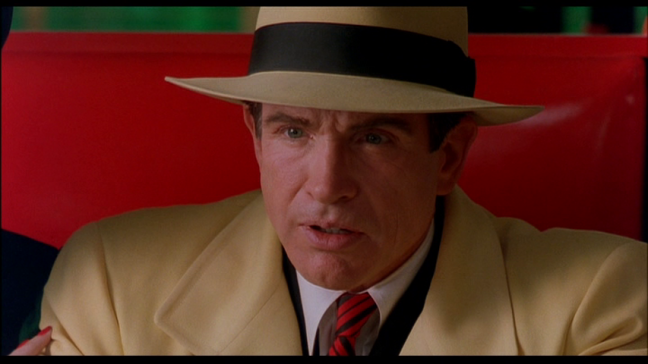 Sadly, Chester Gould never lived to see the film, which was nominated for seven Oscars. He died in 1985 of congestive heart failure, having retired from his strip in 1977. His daughter and widow, on the other hand, were very excited to see it and enjoyed everything immensely. Edna passed away in 1984 and Jean in 2021. Their house, where so many Dick Tracy strips were drawn, was first sold in 1986.

Dick Tracy is still in demand today, albeit more quietly than he used to be in comparison to Marvel or DC characters, but once one encounters him he’s pretty hard to forget.

Another post is coming up on Sunday. Thanks for reading, all…

Dick Tracy Boxed Set (DVD) and the 1990 Dick Tracy film (DVD and Blu-ray) are available to own from Amazon. Some of the shorts can be viewed for free on Amazon Prime, such as the 1945 film.