I’ve touched on 1996’s That Thing You Do! before, and including it in our Five Days At the Fair fest is a no-brainer. That, and the recent untimely death of Adam Schlesinger, writer of the title song, make the timing of this review slightly more fortuitous.

Written, partially composed, directed by, and starring Tom Hanks, That Thing You Do! is a send-up of musical biopics. It did what Walk Hard: The Dewey Cox Story would do eleven years later, only in a much, much more genteel way, thank you. There are no violent freak-outs or drug binges. It’s not over the top in any fashion. There’s barely any profanity in it and definitely no, ahem, messing around. What it does have is an insider’s view of Hollywood and the music business with a heavy dash of idealism.

Guy Patterson (Tom Everett Scott) lives in Erie, Pennsylvania and works at his family’s appliance store. Yeah, he’s bored stiff. What he likes best is to go down to the store’s basement, put on a Del Paxton record, and pound away on the drums. Guy isn’t a dabbler, either–he’s a seriously impressive performer. He drives his dad crazy because he always forgets to turn the sign off when the store closes.

Our hero’s predictable existence gets a little shakeup when his friends ask him to sit in for Chad (Giovanni Ribisi), a guy in their band who leapfrogs over a parking meter and breaks his arm. They’re playing at the Mercyhurst College talent show and the lead singer, Jimmy (Johnathon Schaech) is taking it all very seriously. He and Lenny (Steve Zahn) wrote a somber new ballad, “That Thing You Do!” and want to impress the crowd. Guy picks up the song right off the bat, so the band is all set.

Now they need a name, and since homophones are the rage (like The Beatles), they want something clever. Jimmy’s girlfriend, Faye (Liv Tyler) hits on calling the group The Wonders, but spelled “Oneders.”

On to the talent show. Guy’s bored girlfriend, Tina (Charlize Theron) looks around at the folk groups and mariachi bands with obvious disdain. She just wants to get this thing over with so she and Guy can go to dinner and a movie.

Sorry, Tina, but destiny awaits. On the spur of the moment, Guy taps out an uptempo cue, giving the Oneders’ dour tune some much-needed perk, and Jimmy can’t stop him because crowd is grooving. The Oneders not only win the talent show, but score a weekly paying gig at Villapiano’s, an Italian restaurant out by the airport.

Things start speeding up for the Oneders. Every Friday night Villapiano’s is packed, and they make a record with Guy’s Uncle Bob (Chris Isaak). Phil (Chris Ellis), who drives a camper, asks to be their manager. He gets their song on the radio, and the whole band comes screaming one by one into the appliance store, where they crank every hi-fi in the place.

Soon a big-time producer, Mr. White (Tom Hanks) wants to buy out their contract and take the band on tour with the prestigious Play-Tone Galaxy. Only first he’s going to make a few changes. Faye can only go on tour if she’s their costume mistress. The guys have to wear nice suits because they’re nice boys. Well, all except for Guy, to whom Mr. White tosses a pair of shiny Foster Grants. And no more homophones. From now on, the group is called The Wonders.

The guys are over the moon about their new tour and gush like fanboys when the different stars walk by. Their show goes from a blink-and-miss-it single song performance to playing full sets to being driven out of venues in police cars while fans try to pile on top. And everyone wants to hear “That Thing You Do!” Their record climbs the charts and The Wonders are loving it. And they credit everything that happens to Guy, who always answers, “I led you here, sir, for I am Spartacus.” 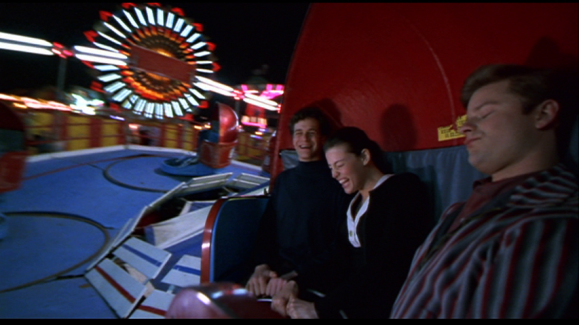 Then they find out they’re in the Billboard Top Ten and it’s off for California. The group stays at the Ambassador Hotel while they do radio spots and appear in a Rick and Anita surfing movie. There’s nowhere to go but up…or is there?

That Thing You Do! does a lot of wink-winking at the biopic formula and celeb culture. It has the humble beginnings. It has the song-on-the-radio scream. It has the tour montage. It has the screaming fans. It has the single climbing the charts. Again, though, nothing gets too raunchy or intense. 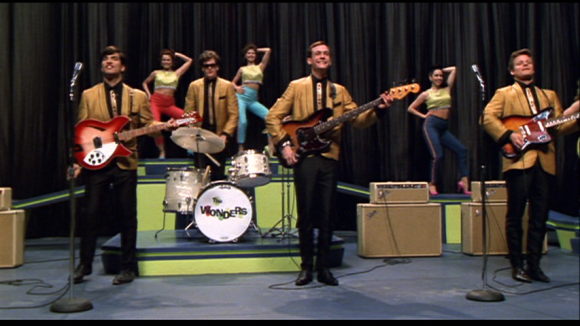 No, the Wonders are much too innocent for that. They’re more likely to be lured away by a spur-of-the-moment trip to Vegas with a Playboy Blondie or a jaunt to Disneyland with some Marines on leave. Even Guy has his moments–his weakness is good jazz music. Regardless of how much our guys stray or not, though, the entertainment industry is endlessly fickle and this will play out in typical slam-bang fashion.

Amazingly enough, That Thing You Do! has a slight basis in fact. I remember when I first watched it with my parents back in the 90s, they both speculated there was really a group in the 60s called The Wonders.

There were actually two that we know of. One of the groups was a regional band, releasing several 45s on the Colpix label in New York in 1963. They may have been from Pennsylvania or Ohio, but the particulars are lost to history.

Other than that, there were plenty of references to the Beatles in That Thing You Do! Jimmy’s performance style is dead-on early John Lennon. When the Beatles appeared on The Ed Sullivan Show, John Lennon’s first closeup was qualified with, “Careful, girls–he’s married.” Something similar shows up in That Thing You Do! and it triggers a series of events that will change everything for some of the characters.

Also like the Beatles, the Wonders got a new drummer and a new bass player. Just in case the references aren’t more pointed, Chad and Pete Best have something else in common: They play every song as if it was a surfer song (hear a version of “Love Me Do” featuring Pete Best here).

A couple of things make That Thing You Do! stand out beyond the run-of-the-mill. First of all, the dialogue is incredibly funny. I don’t know how much ad-libbing the actors did during filming, but knowing Tom Hanks’s history of it, they probably did quite a bit. And no, I’m not going to ruin anything, even if we are talking about an almost-twenty-five year old movie. Anyone who hasn’t see it will want to discover it. 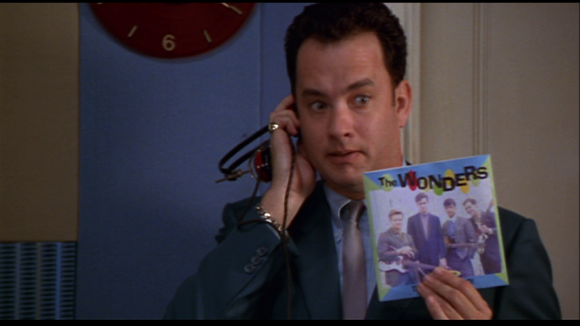 Secondly, the movie emphasizes how fake and token-y show business is, and it can do that because its writers have seen it firsthand. The guys have a meeting with PlayTone head, Sol Siler (Alex Rocco) which amounts to a photo op. Despite his sleazy pink suit, he’s not so bad until the cameras are down and he’s off to the side eating a sub sandwich, and then we see how much of a pig he is.

The Wonders’ so-called “radio appearance” amounts to one word: “Hi.” The guys have to keep smiling and being jovial no matter what, presenting the image the label wants them to present. If the label tells them they have to cover certain PlayTone tunes, then they have to do it. Record “That Thing You Do!” in Spanish? Okeydokey. The movie makes no bones about how much of a strain this can be.

However, it never allows itself to get really down. That Thing You Do! is a ton of fun and ends on a good note. It’s stayed consistently popular since its release, with the major stars meeting up for a reunion three years ago.

The one thing I will say, though, is that the title song is heard a LOT, or it feels like it. Fortunately, it’s not played all the way through every time, and it’s way too enjoyable to be annoying. If anyone hasn’t seen That Thing You Do!, I highly recommend it. 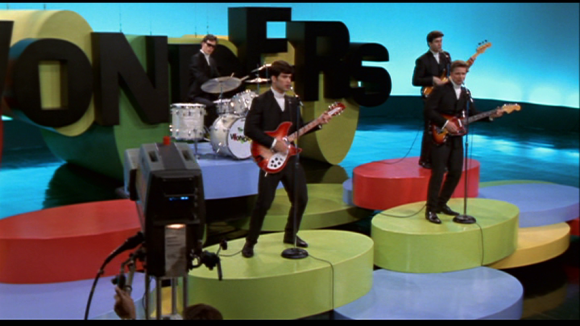 All righty, our fifth and final day of Five Days At the Fair is on the way tomorrow. Thanks for reading, all…

That Thing You Do! is available on DVD and Blu-ray from Amazon.

2 thoughts on “I Am Spartacus”