Janette Oke is one of the premier contemporary authors of Christian literature, and as her novels are mostly set on the Canadian prairies Laura Ingalls Wilder would be her closest comparison. Oke’s eight-book Love Comes Softly series has sold millions of copies and continues to be discovered and re-discovered by enthusiastic readers. Six of the eight books have been made into Hallmark movies, the fourth one of which is 2005’s Love’s Long Journey.

The movie opens with Missie (Erin Cottrell) and Willie (Logan Bartholomew) LaHaye arriving at their new home in Tetsford Junction, where they’re sharecropping a ranch. It’s not much, but it has a little shack of a house and plenty of potential, and they’re optimistic. Missie is also pregnant, but she can’t figure out how to tell Willie.

Willie wastes no time hiring help and securing a herd, and things are looking up. The hired hands are a good bunch, if a couple of them are a little green as in Fyn’s (Johann Urb) case, or mysterious as in Henry’s (James Tupper), or put out to pasture as in Scotty’s (William Morgan Sheppard) case. Then there’s Cookie (Frank McRae), who’s not only the ranch’s primary cook, but giving Missie a crash course in the culinary arts, seeing as she’s a better farmer than chef.

The LaHayes have neighbors as well. Missie meets Miriam McLaine (Irene Bedard), a native American who lives on the next plot over. She’s married to a Scot named Sean (Colin McCabe) and they live with Marian’s brother, Sharp Claw (Gil Birmingham). Missie is unsure what to do when she first sees Miriam riding over the ridge (she even says “How” to her) but the two become fast friends. Missie teaches the children in Miriam’s family how to read, as well as Mr. McClaine, who can only sign his name with an “X.” Meanwhile, Miriam is a midwife who promises to help Missie when her baby is born.

Not all of the townspeople are friendly. There’s a local gang of highway robbers, Trent (John Savage), Mason (Jeff Kober), and Sonny (Richard Lee Jackson) who spotted the LaHayes as they rode into town but who backed off when they saw Willie tie on his gun. Sonny has a little brother named Jeff (Graham Phillips) who he’s trying to provide for, but he doesn’t want Jeff to know he robs people for a living. Jeff is left on his own for long periods, but Missie and Willie come get him for Sunday services at the ranch and teach him how to read.

The vultures keep sniffing around, especially after Fyn gets a bit tipsy one night at a poker game and starts talking about how he and the other ranch hands get paid in cash from Missie and Willie’s secret treasure trove. The thieves may get more than they bargained for, though, if they’re ever dumb enough to get grabby.

That said, here’s the thing about Hallmark’s Love Comes Softly series: It takes books written by a Canadian author that were set in the Canadian West, and films their adaptations in Simi Valley. Not only is there way too much yellow starthistle for these places to pass for the Canadian west, especially the Canadian prairies, the movies owe almost nothing to the source material beyond character names and a few basic plot points that get fewer and fewer as the series goes on.

I wish there could have been more of the book in this movie, because the book has the LaHayes on much more of a journey. In the book they start out living in a sod house, or what Oke calls a “soddy” and Missie stays in town to get ready for her baby’s birth because the ranch is almost a week’s journey from Tetsford Junction. The movie adds extra characters, probably for pacing’s sake, including Miriam and her family, who don’t exist in the novel.

It’s not the first time major changes have been made to a Janette Oke property, either, as Hallmark did the same thing with the When Calls the Heart series–they’re absolutely nothing like the books. I don’t know why they bother using the Janette Oke branding if they’re just going to change everything, even if these series are good family fare.

What does shine through in Love’s Long Journey is the Christianity aspect, which is never shoved down the viewer’s throat but simply presented, whether or not the viewer agrees with it. There’s not a lot of “Christian-ese,” either. Willie and Missie pray frequently and read the Bible together, as well as reading the account of Jesus’ birth at Christmas dinner, and Henry turns out to be a former pastor who’s had a crisis of faith after the death of his wife.

The other ranchhands are ambivalent about Missie and Willie holding Sunday meetings, but after a while they begin to get intrigued, especially Scotty, who says that Christianity is worth looking into because of what he sees in the LaHayes’ lives. Aside from a couple of redemption subplots, the movie leaves the acceptance question up in the air, and regardless of where the viewer lands on Christianity, it adds effective motivation for Missie and Willie’s actions. 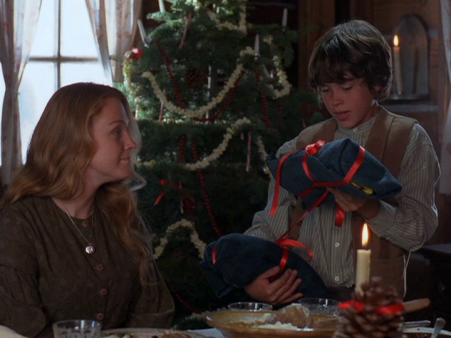 While it might not be just like the novel, or even a straight Christmas movie given what we’ve been looking at this week, Love’s Long Journey is an enjoyable, thought-provoking film.

Vicarity is the order of the day tomorrow, all. Thanks for reading, and I hope to see you then…

Love’s Long Journey is available to own on DVD from Amazon.