In my opinion, Robert Sean Leonard is one of the most competent and interesting actors of my generation. This guy has been in it since he was a young kid. He can sing, dance, read Shakespeare, and handle both drama and comedy. Basically everything that’s respectable in show business. And of course, Leonard is a Tony winner, taking home a statue for his performance as A.E. Houseman in Tom Stoppard’s 2001 play, The Invention of Love.

Eight years before, Leonard would flex his acting (and dancing) chops alongside two more strong actors of my generation, Christian Bale and Noah Wylie in the film, Swing Kids. Directed by Thomas Carter of Save the Last Dance fame, it examines a little-discussed story of life in Nazi Germany.

Hamburg teenagers Peter Müller (Robert Sean Leonard) and Thomas Berger (Christian Bale), along with their friends, Arvid (Frank Whaley) and Otto (Jayce Bartok) are Swingjugend, or Swing Kids, an underground youth movement devoted to American and British culture, especially jazz and swing music. These kids wear their hair long (for the time, anyway), quiz each other on American and British slang, and voraciously dance the jitterbug at clandestine dance clubs.

The Nazis are a presence, but it’s 1939 and our guys see them as something to be rebelled against. They’re much more interested in sneaking peeks at girly postcards and urinating on Nazi posters than in joining the Hitler Youth. And of course, their appetite for swing and jazz must be appeased, whether at the record shop, where records have false labels, or at the docks, where there’s a thriving black market. Their knowledge is far from academic, though, as Arvid is a fantastic guitarist and plays in a combo with Otto, who can swing a mean bass fiddle. 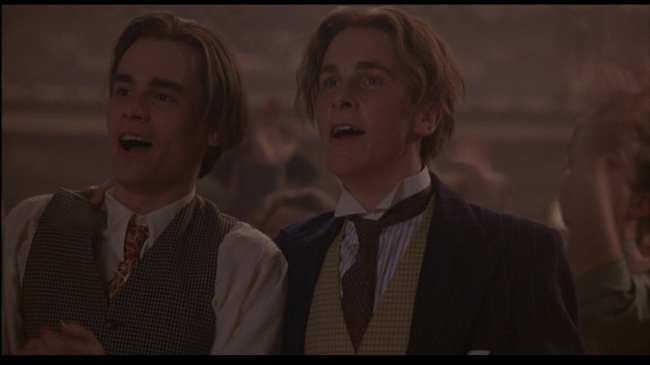 Naturally, the Swing Kids have to watch themselves. The local hangout, the Club Bismarck has a lookout outside, and if Nazis are anywhere near the building, a signal is given and the band switches to polkas. They also identify each other by whistling a phrase of “It Don’t Mean A Thing (If It Ain’t Got That Swing).”

Peter’s family tries to keep a low profile in their everyday life. His mother (Barbara Hershey) works in a factory and his brother, Willi (David Tom) is an impressionable boy who watches everything his older brother does. The family suffered a personal tragedy in 1933, as Peter and Willi’s father was a famous violinist who was taken away by the Nazis one night and came back a shell of his former self. It eventually killed him. Now Peter listens to music as a way of staying in touch with his dad, who he resents on a level because he can’t figure out why his dad was a target.

To make matters even more uncomfortable, Nazi officers are constantly hanging around Peter’s mother, who is a beautiful woman, but it’s implied that these men are looking for more than company. One of them, Sturmbannführer Knopp (Kenneth Branaugh) is especially congenial and indulgent, offering a sort of protection to the grieving family. Peter is naturally suspicious.

While the Swing Kids mostly stay above the fray, an ill-fated attempt to steal a radio from a baker results in Peter having to join the Hitler Youth. Just so he isn’t alone, Thomas joins as well, and they’re both thrust into the deceptive Nazi underworld of propaganda, lies, and how and why one should rat out dissenters. They even meet up with an old friend, former Swing Kid, Emil (Noah Wyle), who’s a pretty big deal in the Hitler Youth ranks. 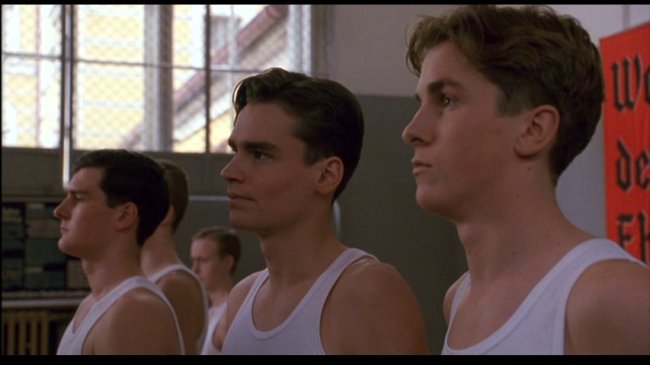 Peter and Thomas try living a double life–HJ by day, Swing Kid by night. It’s the perfect cover. All the morally repulsive gunk they’re being forcibly fed isn’t going to get to them, anyway, and they’re still going to hang out with Arvid and Otto and meet girls and go dancing.

However, this is easier said than done, because there’s always the dilemma of whether one should go along to get along or make a stand. Alliances may shift. What was once a distant annoyance is now a seemingly friendly but persistant nuisance demanding fealty, and one may go native without realizing it. Peter’s old friends see the encroachment of the Nazis differently than Thomas and Peter do, especially Arvid, whose clubfoot puts a target on his back. As 1939 goes on and the Nazis get emboldened about their ambitions, the characters in the film have some tough decisions to make.

As far as the time period goes, Swing Kids is spot-on. Everything about the film is accurate down to the textures and colors, and the whole film has a gauzy filter over it that looks like something out of a movie from the time. Thomas Carter, an underrated director in my opinion, captures the energy of the dances very well, a lot of it done in long takes, following the dancers across the floor as if the audience is doing the Lindy hop and the jitterbug right along with the Swing Kids. It’s kind of a heady feeling and a lot of fun. Leonard and Bale have serious dancing chops, too.

The only detail that wasn’t quite correct was that jazz and swing weren’t explicitly forbidden by the Nazis, who recognized that music was good for morale, but on the other hand, they did try to suppress it by posting the usual propaganda about it being the music of Jews and black people. This tactic was about as effective as campaigning against a Marilyn Manson concert was in the early twenty-first century, and anyway, there were Jewish Swing Kids.

When nothing else worked. the Nazis raided clubs and made arrests, sending these young people to work camps or into the military. Hamburg got the brunt of these raids, as they were the epicenter of the Swing Kid culture, but no corner of Germany or Austria was really safe. However, many of the kids survived to tell the tale.

I remember when the film came out the buzz was about Christian Bale, who was fresh off of making Newsies. People were all aflutter because Bale was dancing again (“Maybe he’s the new Gene Kelly!”), but what no one really talked about was that the lion’s share of the film belonged to Robert Sean Leonard. He puts in a sensitive performance, commanding every scene he’s in. Watching it now, I feel like Bale, a formidable presence himself, was really having to bring his A-game to stay on pace with the more mature Leonard.

One person who could see this was Kenneth Branaugh, who asked to be uncredited despite having a sizeable supporting role. He got himself out of the way to allow these young men to shine, and I think it paid off.

Unfortunately, there were a lot of people at the time, and maybe even nowadays, who looked at the film and said, “So what?” They thought the film’s position on the Nazis was murky. Are they evil or not? Are they a distant threat or just a running joke? 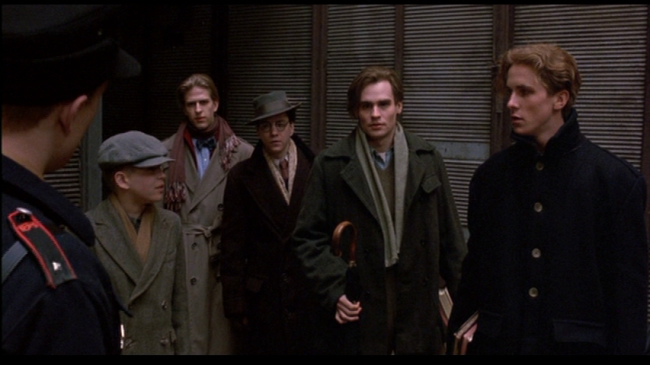 I have to disagree with these assessments, because the movie is contained in 1939. It was before the Final Solution, although the Nazi position on the Jewish people was always very clear. The film is from the point of view of teenagers, who may not have been aware of or had an opinion on the larger political ramifications of Nazi rule. Since the Nazis had been in power for six years, their presence was likely pretty normal to these kids, the youngest of whom would have been eight in 1933. However, as they saw how things played out, it’s very possible that these German teenagers would have seen the Nazis for who they were. Peter does this, but it takes about three-quarters of the movie for him to get there.

The only criticism I have of the film is that it does plod a little bit. It’s not a huge deal, but a few minor trims wouldn’t have hurt anything. The urination scene, for instance, isn’t exactly integral to the plot, so it could easily get snipped.

Overall, Swing Kids is an underrated film that deserves better treatment than it gets, and all because the performances of the actors, Robert Sean Leonard in particular, are really remarkable. And on a side note, the movie has the distinction of heralding the ska and swing crazes of the nineties, which I was totally there for.

For more Tony winners, please see our Day Two posts here. Thanks for reading, all, and hope to see you tomorrow for Day Three…

Swing Kids is available on DVD and streaming from Amazon.