OK, last year in my “Christmas Movies Are All the Same (And I’m Still Here For It)” post, I said that every Christmas movie ends idyllically. All i’s are neatly dotted and all t’s neatly crossed, with everyone holding a cup of cider or hot chocolate and smiling prettily while Grandma hands out cookies.

Heh, well, I take it back. Kinda. Here are five movies that don’t end with everything absolutely perfect. Not that they’re sad, but they won’t make anyone’s insulin spike, either. These movies are a mixed bag, quality-wise, so buckle up, y’all…

Kate runs from her picture-perfect Christmastime wedding because she finds out her fiancee, Alex only married her to come into a hefty inheritance from his grandmother. Naturally, she almost lands straight in the arms of Jason, a dreamy Search and Rescue guy, but no, the insulin will definitely not turn skyward when watching this movie. Anyone who sees it will be too busy groanng at the obviously terrible CGI (including snow), the sustained closeup of Kate’s nosehairs, the exceedingly messy half-hour of false endings, and the perky, neverending Muzak that plays over every scene regardless of the scene’s mood or the viewer’s sanity. 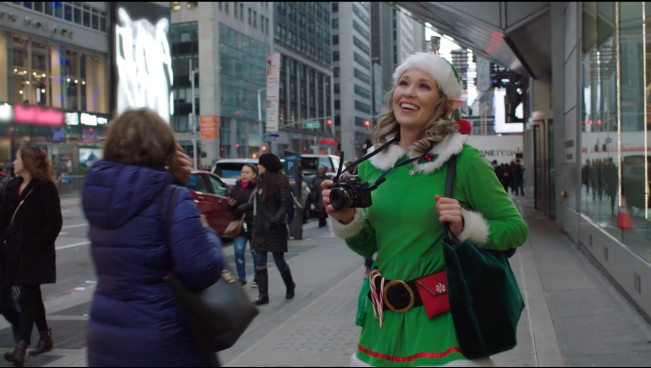 When Santa is kidnapped by the mafia, it falls to bored wrapping paper designer, Elfette to rescue him with the help of her friend, Sparkle. Armed with a utility belt, magic tinsel, a candy red Cadillac SUV and her own personal twinkle(!), Elfette goes on a crazy journey spreading Christmas cheer to the naughty and nice alike while looking for a certain special tree in Central Park at Santa’s behest. Meanwhile, a hit man is hot on her trail and out for blood. A hitman who likes dressing in a cheap shower cap and plastic apron in his offtime while he tells his biceps about all the ways he wants to serve up elf for dinner. No sugar shock here, either, folks, even if the heroine has a mondo sweet tooth.

Zack, a shell-shock victim, meets Mary, an inmate on leave from serving time for manslaughter and sparks fly. Starring Joseph Cotten and Ginger Rogers respectively, with Shirley Temple, Spring Byington and Tom Tully supporting, this film was yet another attempt by producer David O. Selznik to recapture his Gone With the Wind success. What happened instead is one of the most unique wartime (and holiday) films ever made. Read my review here.

When Tim Burton is involved, “unusual” is a forgone conclusion, and how many Christmas movies can boast topiaries, ice sculptures, a punctured waterbed, and more outlandish hairdos than a beauty school magazine? There’s also a certain ironic melancholy to this movie, not only because of its awkward and goodhearted title character, but it was the last time Vincent Price was seen on the screen.

The Nightmare Before Christmas (1993)

Another Tim Burton movie, of course, and this one gives a whole new dimension to the term, “mashup.” I don’t know about anyone else, but in my opinion this clever stop-motion masterpiece has some of the best music of any holiday fare since White Christmas, A Charlie Brown Christmas, or Holiday Inn. All in all, it’s an unforgettable film that I may revisit more fully someday.

Got a favorite weird Christmas movie? Leave a comment below! Thanks for reading all, and I hope to see you tomorrow, because believe it or not, we have a bonus movie for this list that is so out of the ordinary that it deserves its own review. Not going to spoil anything, but it’s a real eye-roller. Until then…