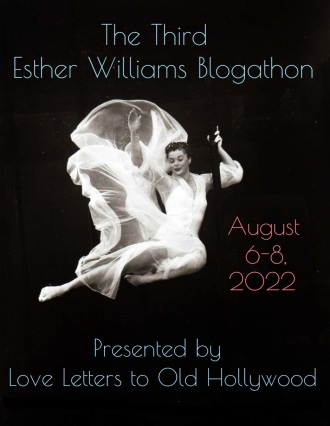 Esther Williams was no stranger to hazards, naturally, since her movies typically involved dangerous stunts, but in the case of 1948’s On An Island With You, things were just annoyingly blah. The movie was blah, the swimming scenes were blah, and spirits were blah. Still, the show must go on, and there’s fun to be had.

Rosalind Rennolds (Esther Williams) is an actress making a movie, On An Island With You (hurr durr) in Hawaii with Ricardo Montez (Ricardo Montalban) and her best friend, Yvonne Torro (Cyd Charisse). Assistant director Buckley (Jimmy Durante) goes out among the many Navy personnel stationed on the island and plucks Lieutenant Lawrence Y. Kingslee (Peter Lawford) out of his company to check the Navy uniforms in the movie for accuracy.

Lawrence, or Larry, as he’s more often called, is glad about his new assignment. He’s also depressed and confused because he can’t figure out why Rosalind doesn’t remember him. She visited his island base in the Pacific three years previously to entertain the troops. Larry fell madly in love and figured Rosalind did too. 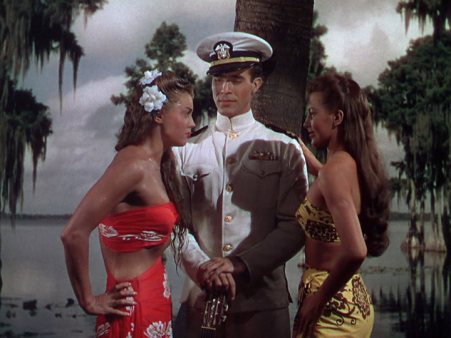 Not so, Larry. Rosalind is engaged to Ricardo, and they’re all set to have a big Hollywood wedding as soon as the movie wraps. Meanwhile, Yvonne waits in the wings pining for Ricardo and waiting for her chance to be with him. If that ever happens.

Speaking of which, one day during filming Larry, who’s been asked to fly Rosalind up in a plane for a scene, decides to abscond with her to his former island base, where they dance to his short wave radio, Rosalind falls in an animal trap, and the natives steal the wheels off Larry’s plane. Rosalind’s mad as a hornet at Larry for kidnapping her, but on the plus side seeing Larry’s old base jogs her memory. 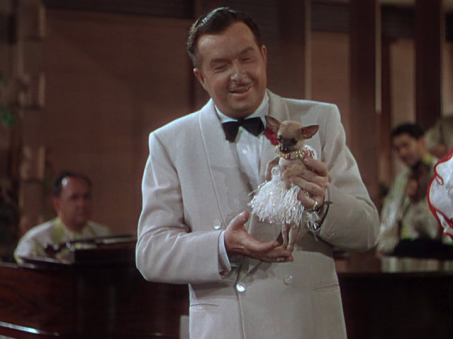 Back at the ranch Ricardo, Yvonne, Buckley and director George (Dick Simmons) wait on pins and needles for Rosalind to be found, and it helps that they can listen to Xavier Cugat and his orchestra while they worry.

Of course, Larry and Rosalind are found, and of course Larry is in hot water for going AWOL with Rosalind. In spite of herself, Rosalind feels sympathy for Larry’s plight, not to mention something else, and there’s not much mystery about what that something else is. It’s not a huge surprise where things turn out. We all know no one ends up alone in On An Island With You. 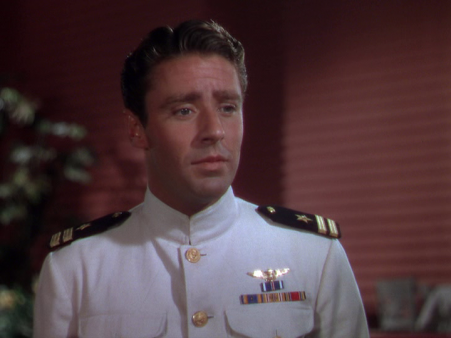 While the movie is completely fictional, it has a slight basis in fact. Esther Williams did go on camp tours during the Second World War, where she was a huge hit even though she wasn’t a big star yet. Late in the war she would even have the servicemen dive for her (waterproof) portrait in a pool game called “Capture the Esther.”

Durante got a little personal, too. One night at the local nightclub he tells Xavier Cugat that he used to be part of a vaudeville team called Clayton, Jackson, and Buckley that toured small towns around the United States. Everything he said was true except that the real team was called Clayton, Jackson, and Durante. He even sang one of their actual hits, “Can Broadway Do Without Me?” 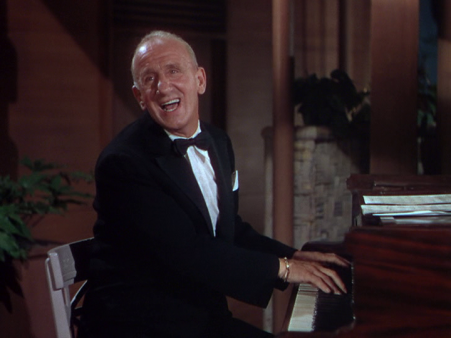 There’s not much plot to On An Island With You, but it’s so crammed with schtick and other fun bits that it’s not immediately apparent. Jimmy Durante almost carries the movie, but to be fair, he’s pretty hard to ignore. He’s also a good sport, facing off with Cugat’s remarkably sedate grass skirt-clad chihuahua, Chita, and pattering with British child actress, Penelope Peabody (Kathryn Beaumont).

Peter Lawford, however, was clearly uncomfortable. He was coming off his breakup with Lana Turner, and his smile is often pasted on, although he wore the jewelry she gave him in the film. Embarassingly enough, Lawford wasn’t a good swimmer, and the few times he’s in the water with Esther he can’t act his way out of how mismatched he is. This probably frustrated Esther a little, and it’s a bit odd to see a Navy man who can barely swim, but they tried work around it. 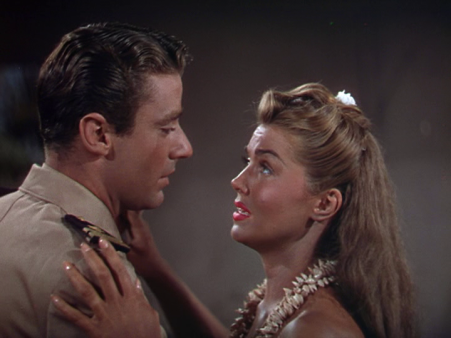 Lawford wasn’t the only one to have a tough time. Cyd Charisse failed to warm up for a dance number one day and broke her leg, which kept her from starring in Easter Parade. Her dance sequences are woefully few and far between in the film, but she and Ricardo Montalban have smoldering chemistry.

Esther and Ricardo had the worst experiences of anyone. Esther came into the film depressed after a miscarriage, and she wasn’t happy to be working with Richard Thorpe again because the two of them didn’t get along in the slightest. To make matters worse, when she fell into the animal pit during the island scene there was no padding at the bottom and she sprained her ankle. Who knows if this little bit of negligence was deliberate or not, but either way, it meant that Esther had to finish the movie hobbling around on crutches. 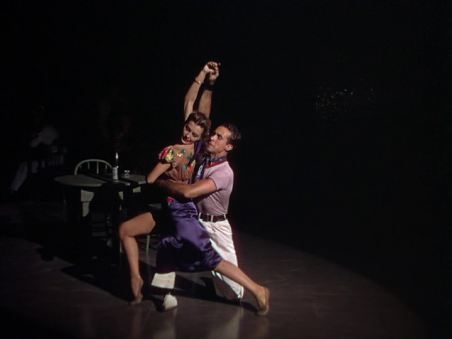 According to Esther’s autobiography, Thorpe didn’t rag on her too much. Oh no, he saved that for Ricardo, which was super jerky not only because no one should treat anyone like dirt, but who could not like Ricardo Montalban? Really, Mr. Thorpe?

In the end, the movie was successful and brought in $3.2M for MGM, but everyone involved with it seemed to want to forget it once it was done. Maybe that’s why the movie gets little more than a few pages or paragraphs of less-than-complimentary language in Williams’ and Durante’s respective biographies. 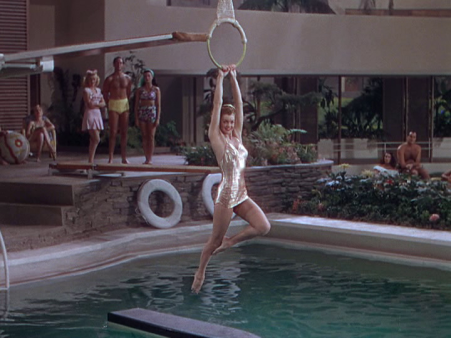 On An Island With You isn’t so bad. It isn’t so good, either. And that’s fine.

For more of the great Esther Williams, please see Michaela at Love Letters To Old Hollywood. Thanks for bringing this back, Michaela–it’s always fun to visit with Miss Esther. Thanks for reading, all, and I hope to see you tomorrow for our first day of “Sorta Adios To Summer.”

On An Island With You is available to own on DVD from Amazon.