I’m so glad travel is basically back to normal, those stupid inflated fuel prices notwithstanding. This summer we’re staying pretty close to home because the cheapest gas in my part of Placer County is currently around seven dollars a gallon, and any traveling we do will have to be creative. Among other things we’ll be taking a short jaunt over to Virginia City next week and I’m trying to plan a day trip on Amtrak to Old Sacramento for July (It’s way cheaper than driving).

Since we can’t really go anywhere vicarity is the order of the day, and one of my longtime favorite movies is 1980’s Bon Voyage, Charlie Brown (And Don’t Come Back!). Bon Voyage is unique to the Peanuts universe, and not just because it’s one of the only Peanuts cartoons to have adults speaking actual words instead of the usual wah-wah-wahs. 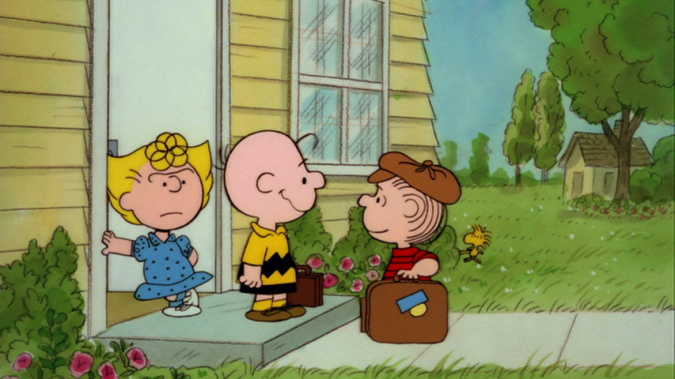 Anyway, Charlie Brown, Linus, Peppermint Patty, and Marcie find out they’ve been selected to go to France for two weeks as part of a student exchange program. No one is more shocked than Charlie Brown, who’s having quite the day. When he gets home he finds a letter in his mailbox, only he can’t read it because it’s in French.

Snoopy’s been invited to go along as well, and he does not travel light. He’s got enough luggage for four and golf clubs and a bowling ball. He’s also traveling first class, which mortifies Charlie Brown. Woodstock, frustrated at being left out, sneaks onto the plane via the food service cart and hides himself under the lid of Snoopy’s fancy lunch plate.

Meanwhile, Charlie Brown, Linus, Marcie, and Pepperment Patty are busy in coach, where Marcie translates Charlie Brown’s letter for him. In sum, a girl named Violette Enfleur has invited Charlie Brown and Linus to stay with she and her grandpa at her home, the Château Malvoisin in Le Héron.

The group makes it to London and are immediately hit with culture shock when they go to a pub for lunch. Well, all except for Snoopy, who’s got a tennis match at Wimbledon where he’s a member in good standing. Or at least he is until he pulls a John McEnroe and gets kicked out.

The group meets at Victoria Station, where they hop a train to Dover and then take a hovercraft to France. After renting a car and an ill-fated attempt by Charlie Brown to buy a loaf of French bread, they finally arrive in Le Héron. Marcie and Peppermint Patty are staying with a guy named Pierre, who immediately takes a shine to Marcie while Peppermint Patty takes a shine to him. Then it’s off to the Château.

Pierre is aghast when he finds out that Charlie Brown and Linus are staying at Malvoisin because Violette’s grandfather, the Baron, is very unfriendly and hates everyone.  When Charlie Brown, Linus, Snoopy and Woodstock get to the Château no one is there to meet them and they sleep in the stable with Snoopy standing watch.

Snoopy isn’t a very good watchdog, though. As soon as Charlie Brown and Linus are asleep he and Woodstock sneak off to the local pub, where he knocks back several root beers and plays World War Two music on the jukebox. Snoopy doesn’t come back until morning, which means he misses the excitement: Charlie Brown and Linus wake up to find themselves sleeping on pillows and covered with blankets. As if that weren’t enough, a table has been set up with tea and croissants.

Bon Voyage, Charlie Brown was cathartic for Charles Schulz, who was billeted with his company for six weeks at the Château Malvoisin during World War Two. Sparky, as he was known, never forgot it. He would spend nights at the local café, where he would drink root beer, listen to music, and play foosball. Thirty years later he got to return to Le Héron, where he found the Château abandoned and overgrown and the café frozen in time. The bartender had even worked at the café duing the war and remembered how it was, although he pointed out one thing: The foosball table was in a different spot than it had been thirty-five years before. 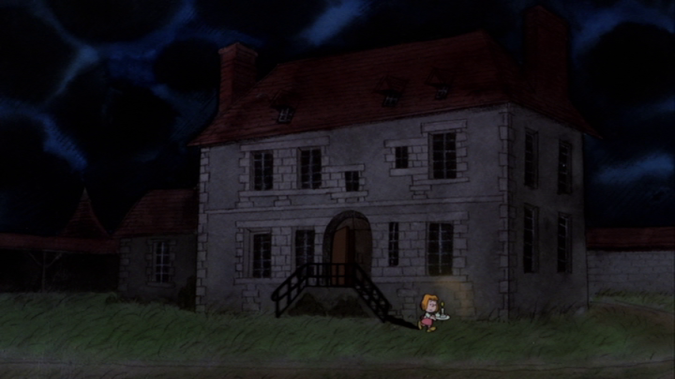 When Schulz and his wife, Jean went back to Le Héron a year later they noticed a dramatic change. Jean remembered it this way:

The Château had been rented out or sold, and it was all spiffed up. And the little café had been transformed into two small apartments. The scene we had been talking about for a year was gone. Imagine our surprise. But to me, there was something perfect about it. It was as if the scene remained suspended in time so that Sparky could revisit it. Once that had happened, history could continue. I am so grateful for things suspended in time. I wish more things could be, but I know they cannot. 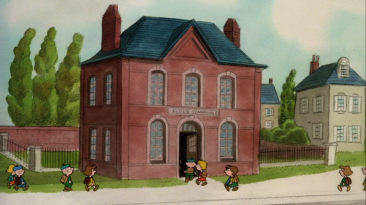 The Le Heron school as it looked in the film… 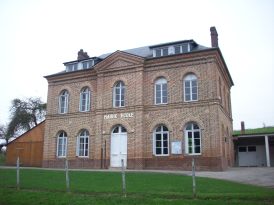 and the school today. (https://en.wikipedia.org/wiki/Le_H%C3%A9ron)

Things are still changing, of course. Nowadays, anyone who travels to France from England and vice versa takes the Chunnel, hovercrafts having been phased out as of 2000. The Château is a private residence, and at least at one time its owners hosted fly fishing enthusiasts who came to enjoy the abundant trout in the nearby river. Who knows what’s happening with it currently, but the Château is still considered to be one of Le Héron’s main attractions. Sparky might recognize the school, though, which looks just about exactly the same as it did when Bon Voyage was made and probably for most of its history.

Bon Voyage, Charlie Brown is an homage to France and Schulz’s memories, not just of the Château but of the experience of being overseas. The backgrounds are remarkably detailed for a Peanuts cartoon, especially the scenes in France, and it almost feels like being there. The look of the Château is especially precise. I like that the film gives us time to settle into these environments and savor all the care and work that went into it and the places these characters find themselves. If anyone needs a bit of vicarity, Bon Voyage is an enjoyable jaunt.

The MGM Blogathon is coming up on Sunday. Thanks for reading, all, and I hope to see you then…

Bon Voyage, Charlie Brown (And Don’t Come Back!) is available on DVD and Blu-ray from Amazon.