Today it’s eighty years exactly since Anne Frank started her diary, and as of July sixth, eighty years exactly since the Frank family went into hiding. Anne once wrote that she wanted to go on living even after her death, and therefore she was grateful to God for the gift of writing. She has certainly gotten her wish. Not only is her diary one of the most widely-read books after the Bible, but there have been a LOT of films made about her. Documentaries, sure, but a lot of full-on movies. And several miniseries. And a YouTube series. There are too many to mention, so here’s a list.

Not that Anne herself didn’t get in front of a camera. The first and only time Anne Frank was filmed was in 1941, at the wedding of one of the Franks’ neighbors:

As plenty of people who analyze film have noticed, biopics tend to be formulaic. They seldom zero in very deeply because they aim to work in as much of their subject’s life as possible, and they all hit the same basic points. A Great Person is born, overcomes adversity or causes adversity, does something history-changing, finds their niche, speaks inspiring or forbidding words, wins or loses fame and fortune, and either dies tragically or happily.

Anne Frank’s short life makes her a formula unto herself. An energetic, popular Jewish girl goes into hiding, writes her diary, has a romance with the boy upstairs, and dreams about being a writer. While she lives in fear of discovery by the Nazis, she grows up very quickly, and is able to analyze her faults and strengths with great maturity. Her death from typhus in the Bergen-Belsen concentration camp is shadowy if not unseen, leaving a devastated Otto Frank to read his daughter’s words as the scene fades out and the credits roll. Ephermera often shows Anne with her chin in her hand, either gazing pensively out a window or off into space, with or without a writing utensil at the ready.

Where these movies deviate is scholarship or the common mores of the time periods in which they’re created. When George Stevens made The Diary of Anne Frank in 1959, most of what we knew about Anne came from her diary and Otto Frank, who was very careful about what he shared with the public. The war years held painful memories for him and the rest of the helpers, most of whom were still alive when the film premiered.

There was a spirit of optimism to the 1959 film despite its serious subject matter, which fit in with the hopeful nineteen-fifties. It leaves the viewer with Anne’s words: “I still believe, in spite of everything, that people are really good at heart.”

This quote is presented out of context in the film and has been repeated similarly by others in the years since as well, despite missing the statment’s nuance. Anne was struggling to keep her head above water in her turbulent world and not completely lose faith in humanity.

Very seldom does an Anne Frank movie fail to land, even when there are missteps, but one criticism I remember seeing during the eighties and nineties was that Anne seemed too perfect, like a saint. The 1952 B.M. Mooyaart-Doubleday translation of her diary was even criticized as too mature; no teenager could possibly talk that way.

Personally, I disagree, because Anne was an European who came of age during the nineteen-forties, she was raised by well-mannered people, and she developed very fast as a writer and a person. She certainly wouldn’t have talked like Britney Spears or something.

But that’s just me.

In the nineteen-nineties and early twenty-first century there was a marked difference in the way Anne’s story was told, although the usual elements were still present. A lot of this was due to new information that became available starting in the late nineteen-eighties. The Critical Edition was published in Dutch in 1986, then in English in 1989, revealing the real names of the Annex occupants and the helpers. It also included Anne’s first draft of her diary and extensive articles relating to her handwriting, authenticity checks, and the arrest. The Definitive Edition was published in 1995, which also added in additional material left out of the 1952 translation and made Anne sound more American and contemporary.

Also during the nineties, German writer Melissa Müller published her excellent biography about Anne, which filled in a lot of blank spots about Anne’s life and the time period in which she lived. Her material was worked into the 2001 miniseries, Anne Frank, a thorough telling starring Hannah Taylor-Gordon, Ben Kingsley, Lili Taylor, and Brenda Blethyn. It was a daring series in a lot of ways, because not only was there brief nudity during the concentration camp scenes, but it pointed to Opekta cleaning woman Lena van Bladaren as the betrayer. Critics bristled at that last part (even though it’s entirely plausible in my opinion), but it didn’t stop the series from winning a Peabody Award. 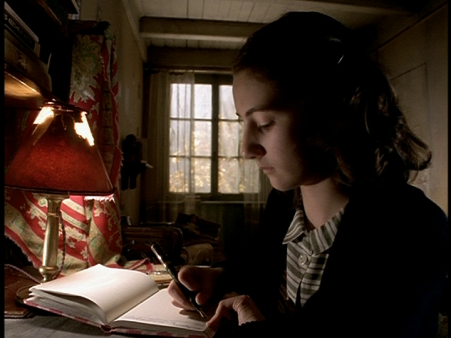 Nowadays, the aim seems to be to make Anne relatable to generations that are further and further removed from the Holocaust and the World War Two period. The 2009 BBC version of The Diary of Anne Frank is excellent, albeit condensed and rapid-fire, and the Anne Frank House has its Video Diary series, which is unfortunately not available in its entirety everywhere due to copyright. I also wish the 2016 German version was available to American audiences, but as far as I know it hasn’t been translated yet.

What we have seen lately are some attempts to think outside the proverbial biopic. One example is the 2017 indie, Love All You Have Left, about a philosophy professor named Juliette (Caroline Amiguet) whose daughter was killed in a school shooting. Stricken with grief, Juliette hasn’t left her house in a year and spends her time popping sleeping pills in a vain attempt to beat her insomnia.

While her husband is on a business trip to New York, Juliette finds a girl in her attic (Sara Wolfkind) who says she’s Anne Frank. Juliette is understandably skeptical because Anne Frank has obviously been dead for years, but the girl insists: One minute she was in the Annex, and the next minute she was in Juliette’s attic.

Juliette bonds with Anne, giving her homework and feeding her, but sooner or later she knows she’ll have to tell Anne about her fate. It doesn’t go over well at first. Put it this way: The film takes on a Sixth Sense quality.

While I give the filmmakers major points for creativity and a fairly competent execution, the movie has some real weak spots. Anne Frank wouldn’t have looked or acted like she was in High School Musical, for one thing, and the ending is confusing and muddled. Again, though, the concept of the film is good.

Another one is My Best Friend Anne Frank, which is a new Dutch film about Anne told from Hanneli Goslar’s point of view. Most of the film portrays Hanneli in the star prisoner half of the Bergen-Belsen concentration camp, and while she stands in line at roll call and tries to keep busy, she remembers her time in Amsterdam with Anne. It’s all triggered by a whistled tune that sounds like the one she and Anne would use to call each other when they went over to each other’s houses.

The movie is well-done; the concentration camp scenes are done in cold, muddy grays and blacks, while the Amsterdam scenes seem bathed in golden light. I prefer it in the original Dutch with the English subtitles because it’s closer to how Anne and Hanneli would have sounded, but the dubbed dialogue isn’t too bad.

However, it may not be the best movie for introducing kids to Anne Frank, because there are some scenes that get pretty sexually explicit. And it has a few inaccuracies. There’s one scene in a movie theater where a boy gives Anne a few kisses and we know that didn’t happen because Peter was the one to give Anne her first kiss. And as far as I know Anne and Hanneli never played in the Secret Annex before it became a hiding place; prior to the war, a chemist used the rooms for his experiments.

One film I’m intrigued to see is the 2021 animated feature, Where Is Anne Frank?, about the Kitty of Anne’s diary being transported forward in time. According to the synopsis on IMDb, Kitty thinks Anne is still alive in the modern world and embarks on a quest to find her. Directed by Israeli Ari Folman, the film had the direct support of the Anne Frank Fonds and sources Anne’s diary and her family archives but is unfortunately not available in the United States. Maybe that will change soon, but we’ll see.

Why do people keep going back to Anne Frank when we know how movies about her will end and what they will contain? It seems very similar to watching films about the Titanic. I think we all hope for closure, or to see something we haven’t seen before, or to see a girl who had so much potential alive again onscreen, if only briefly. We may want to be inspired all over again. And we may want to spend time with someone we consider a friend. Whatever the reason, I hope the lights never go down on Anne Frank.

Another post is coming up on Friday. Thanks for reading, all…

2 thoughts on “The Art of the Anne Frank Biopic”