I’ll be honest: Noirs aren’t my default choice when it comes to movies. I guess it depends on my mood. Sometimes I’ve looked at those shadowy scenes and wondered if the characters have ever seen daylight or worn any outerwear other than a trench coat and a fedora. Or ever felt safe venturing into their apartments because murderous thugs might pop out and put them in a half nelson or worse.

Still, something about those movies draws me in and lures me along. They’ve even been known to win me over, and I definitely have my favorites. Four, in fact. Of course, right? And they’re all from the nineteen-forties, although only by coincidence. Mmmkay, moving on…

First of all, though, I’d like to give a quick nod to my Honorable Mention:

The movie is the first screen appearance of Raymond Chandler’s Phillip Marlowe character, who is ably brought to life by Dick Powell. I’d include it in this list officially, but I only saw it once on TCM a long time ago so it hasn’t gotten the attention the other four have. Still, it’s an awesome movie and I’m looking forward to buying the DVD someday.

And now on to my four favorites in no particular order (Click on the images to read my full reviews of almost all of them): 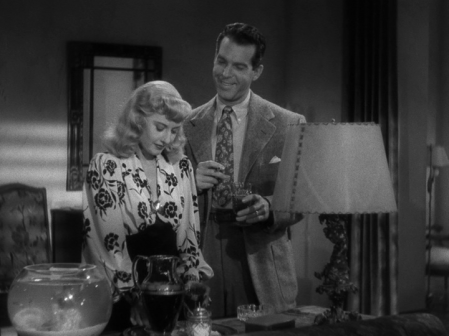 Double Indemnity is not only an excellent, rat-a-tat thriller starring Fred MacMurray as an insurance man who gets a little too involved with the wife of a client, but the film is based on a real trial that took place in 1927. Author James Cain was in the courtroom covering the trial and turned what he heard and saw into a novel. It was so racy the film was delayed for eight years, but it still manages to ooze sleaziness, especially in the character of Phyllis, played by Barbara Stanwyck, in an unusually unflattering wig.

Betty Grable in a noir, y’all. Whodathunk it? It was the second time she and Carole Landis would play sisters, the first being the considerably lighter and brighter Moon Over Miami, only in Screaming Carole’s character lives to be murdered. It falls to Victor Mature’s hardboiled sports promoter, Frankie to find out whodunit and why, and naturally he and Betty form a relationship. What’s interesting about this movie is that Frankie and Betty’s character, Jill use an, ahem, adult theater as their home base whenever they need to find each other. How they got that story element past the Hayes Office is anyone’s guess. It’s also interesting to hear “Over the Rainbow” played constantly throughout the film.

I think everyone likes Gilda. While it’s a story of underworld intrigue and overt sexuality, it’s not a typical noir by any stretch of the imagination, since there’s no whodunit or femme fatale. I don’t think there’s even a trench coat. However, it ticks the noir boxes in its own way, and its biggest statement is Rita Hayworth; namely, Rita Hayworth’s hair, which netted Columbia Studios scads of feedback, both favorable and otherwise. 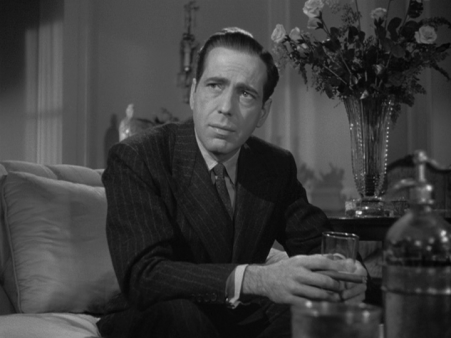 My last pick, and the only one I haven’t reviewed yet, The Maltese Falcon is one of the many, many times Dashell Hammett’s Sam Spade was adapted for mass media. It’s not just the famed bird that’s important in this film but the dark horses, of which there are many, and no, I’m not going to spoil anything. Humpherey Bogart is an iconic Spade and ably matched by Peter Lorre, Mary Astor, and Sidney Greenstreet.

Noir might not be my first choice, but once I get hooked by these movies it’s hard to look away, and that’s pretty cool.

For more noir goodness, please see Rick at Classic TV and Film Cafe. Thanks for hosting this event, Rick–I know we all look forward to it every year. Thanks for reading, all, and see you tomorrow with a new “During World War Two”…

18 thoughts on “My Four Favorite Noirs”