We all know how much Bette Davis loved heavy, meaty, dramatic roles, and her turn as Regina Giddens in 1941’s The Little Foxes sure gave her something to sink her teeth into.

I tried watching this movie on the plane to South Dakota last summer, but there was no sound and the remote was in the armrest, which my mom and I kept leaning on by accident, so all the way to our first layover the screen showed us a mix of Bette Davis and a baseball game. After about thirty minutes I gave into the confusion and sipped my ginger ale.

The Little Foxes is the story of the Hubbard and Giddens families, old Southern clans who seem to be resepected in their town. They host distinguished guests and move in the best circles. They even live next door to each other so there’s lots of visiting back and forth and hanging out in the adjoining yard. These are very close families in more ways than one.

Under the surface, however, the Hubbards and Giddens may not be so respected and loved. David (Richard Carlson) young newspaperman and son of Mrs. Hewitt (Virginia Brissac) the local dressmaker, mentions offhand to Alexandra Giddens (Theresa Wright) that he doesn’t like the Hubbards, but then he amends his statement to say that he likes one of the Hubbards. His meaning is clear, but we hear the particulars later. 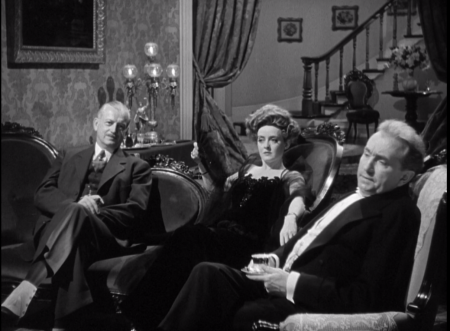 The Hubbards are well-off, but only tenuously so; Oscar Hubbard’s (Carl Benton Reid) son, Leo (Dan Duryea) works in the local bank, and Oscar, his brother, Ben (Charles Dingle) and their sister, Regina (Bette Davis) sit around and fantasize about what they’re going to do when they get rich. Regina plans on taking her daughter, Alexandra, or “Xan,” as everyone calls her, to Chicago, where they’ll entertain high society and Xan will meet a suitable husband. Oscar and Ben think Xan should marry Leo, which Oscar’s wife, Aunt Birdie (Patricia Collinge) is very much against. Regina’s not crazy about the idea, either, but Birdie is the one Oscar slaps later.

Oscar, Ben, and Regina have convinced a Chicago businessman, William Marshall, to open a cotton mill in their area and take them on as partners, which will line the family coffers considerably. Regina doesn’t want to give a definite answer without her husband being present, and she sends Xan to Baltimore, where Horace Giddens (Herbert Marshall) is convalescing in a sanitarium. Xan is to bring Horace home and then Regina will give her answer and her money. 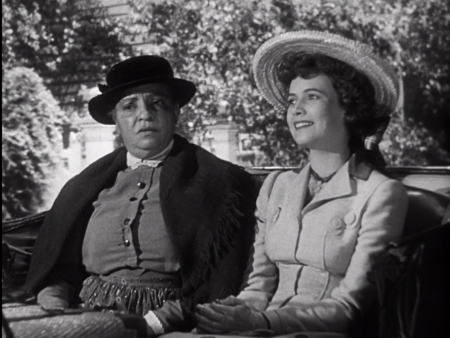 Horace is dying of heart failure and doesn’t have long to live, but he’s not so sick that he doesn’t know what’s going on, and like the great man he is, he seeks to protect his family as much as he can. At an informal family confab in the garden, sans Regina, Oscar, and Ben, of course, Birdie laughs hysterically and shares some painful information about her life before she starts sobbing. Horace starts thinking, and he makes a beeline for his bank to bring home his safe deposit box and then he sends for his lawyer.

Meanwhile, Xan starts hanging around more and more with David, who also forms a friendship with Horace. They like to play chess together. As Horace’s health gets worse, there will be less and less pretending on the part of the Hubbards because stress does funny things to people. Those who think they are in control will find out otherwise, and there will be nothing they can do to stop it. 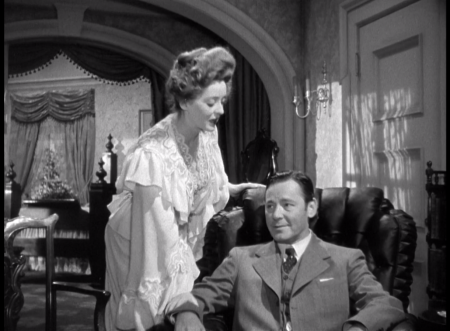 The Little Foxes was based on a successful play of the same name by Lillian Hellman, which originally premiered at the Nederland Theater on Broadway on February 15, 1939. It would run for a year, giving over four hundred performances, and has since been revived three times. Most of the 1939 Broadway cast came to Hollywood to make the film, with the exception of Tallulah Bankhead, who played Regina, Frank Conroy, who played Horace, and Florence Williams, who played Xan.

The play has never not been successful. Tallulah Bankhead as a film star, not so much. She had tried making some films in the thirties but none of them did very well, and director William Wyler wanted Bette Davis to portray Regina. It wasn’t Davis’s first time playing a Southern belle, and she seemed to relish it, lounging all over Regina’s Eastlake furniture like the queen she knew she was. 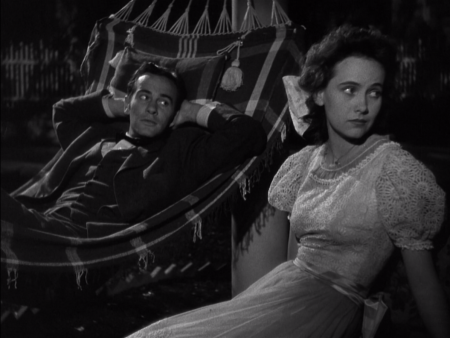 Ironically, Davis took a lot of inspiration from Bankhead’s Regina (New York Times critic Bosley Crowther noticed), which bugged the heck out of Wilder and fed a longstanding feud between Davis and Bankhead, as the former often starred in filmed versions of the latter’s plays. Wyler thought Bankhead’s interpretation was too mean and wanted Davis to play Regina nicer. Bankhead had nothing to do but smoulder, although she did confront Davis at a party.

Foxes had some pretty prestigious names attached to it besides Bette Davis. German expressionist master Gregg Toland was the cinematographer and Lillian Hellman wrote the screenplay herself, with an assist from Hellman’s friend, Dorothy Parker, Parker’s husband, Alan Campbell, and Hellman’s ex-husband, Arthur Kober.

Everyone’s attention to detail paid off, because the film looks incredible. Toland employed his trademark deep focus, which recalls his work on Citizen Kane, and faces are the focal points of the scene composition, with characters often shown one standing behind the other at an angle, as if signaling the dominance of the actor in the foreground. Or not. There are times when Regina seems to have the upper hand over Horace, but then he lets her know that he’s not going to put up with her conniving. It’s like watching an angler reel in a fish.

There aren’t a lot of cuts anywhere in the film, which allows the actors’ reactions to really sink in. There’s one scene in which Xan is bending over Horace as he’s on his deathbed. We don’t see his face as much as hers, but we know what’s happening because her face begins to twist in grief. 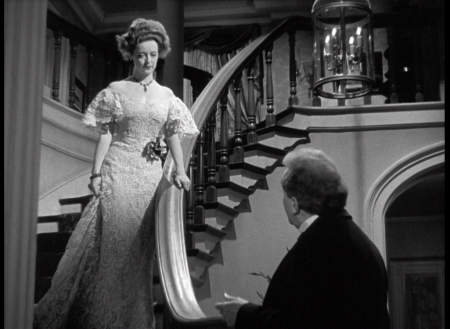 Another scene where this subtle character development is really on display is when Horace, Xan, Birdie, David, and servant, Addie (Jessica Grayson), are hanging out in the garden. Both Xan and Birdie ask if Regina is home, and when they learn she’s out having a dress fitting, their faces relax and the characters all begin to talk freely.

Birdie in particular, who hides Oscar’s abuse from everyone, especially Xan, overshares and everyone looks uncomfortable as she talks and laughs erratically. Oscar married her for her money, or maybe something else, and she was swindled into believing he sincerely loved her. She’s so uncomfortable she drinks alone in her room every night. The scene is very brief, but it spells out how abusive and duplicitous the Hubbards really are, and it may be uncomfortable to anyone who’s been in a dysfunctional family or any dysfunctional situation.

Not surprisingly, the film was a tremendous success, mainly because the character studies and performances were so impressive. In fact, over twenty-two thousand people showed up to see the film at Radio City Music Hall when it first opened. Four years later, it was adapted for the Screen Guild Theater with most of the cast reprising their roles.

The one thing I would say about the film is that Xan’s age is a little ambiguous. Theresa Wright was in her early twenties when she played the role, and her costume implies her character is around fifteen or so, but she plays her role with such maturity that the look of her character could afford to age a little bit.

This is a really small beef, though, because The Little Foxes is a torrid yet satisfying film. I’m glad I finally got to fill in the blanks.

The Little Foxes is available on DVD from Amazon and is free to stream for Prime customers.

If you’re enjoying what you see on Taking Up Room, please consider subscribing to Taking Up More Room on Substack, where you’ll find reviews of current movies and TV shows as well as other goodies.