I’ve said this before, but I’ll say it again: One of my favorite shows growing up was (and still is) The Wonder Years. For those who might not be familiar with the series, it’s first set in 1968 and ends in 1974, and follows Kevin Arnold (Fred Savage) and his friends, Winnie (Danica McKellar) and Paul (Josh Saviano) as they navigate the murky teenage years.

The kid actors in it are mostly my age, and when I was in junior high it was my generation’s Seinfeld. We watched the episodes and talked about them the next day. We hoped our junior high experience would be just as exciting.

Yeah, no, it wasn’t, but it was still fun, and we had our own share of drama. I think the teachers at my school recognized this, because Joe Cocker’s cover of “With A Little Help From My Friends” was one of the songs used in our year-end eighth grade slideshow. People chuckled all over the multi-purpose room when they heard it.

It’s hard to pick a favorite episode of The Wonder Years because there are so many, but today we’re going to focus on the Season One finale, “Dance With Me,” which was originally broadcast on April 19, 1988.

The episode is an informal continuation of the previous week’s show, “The Phone Call,” in which Kevin agonizes about calling Lisa Berlini (Kathy Wagner). Now that he’s faced his fears, he’s feeling pretty good about himself. He and Lisa exchange significant looks in homeroom while Mr. Diperna (Raye Birk) reads the day’s announcements over the PA system.

Everyone stops short when they find out there’s going to be a dance, and right off the bat the question is, who’s taking who? A girl named Carla Healy (Krista Murphy) likes Paul, but no one can say Carla’s name without Paul sneezing his head off. Even though Kevin is waffling, Paul lets slip to Winnie that Kevin’s asking Lisa Berlini, Winnie looks disappointed while playing it cool, and Kevin gives Paul a dirty look after Winnie leaves.

He forgets all about that in social studies class, though, when he and Lisa pass notes back and forth during a multi-media presentation about how society is going to Hades in a handbasket. Appropriately, “The Letter” by The Box Tops plays over the scene.

(On a side note, how does the teacher not notice these two tearing paper out of their binders? Either he’s really in the zone or he doesn’t care, but it’s hard to ignore the sound of paper ripping. There’s a reason junior high girls fold paper into the smallest shapes possible, or at least they did when I was in junior high. Who knows what they do nowadays. I’m gonna digress now.)

In the midst of their vigorous note-passing, Kevin gets up the nerve to ask Lisa to the dance, and feels on top of the world when she sends back a note saying, “Okay,” with a big smiley face. His euphoria lasts until she says the same thing to Brad Gaines, played by a very young Mark-Paul Gosselaar, out in the hallway. Ouch.

At lunchtime Kevin tries to redeem himself by asking Winnie to the dance, only she’s already going with Kirk McCray (Michael Landes). All hope seems lost after that, and Kevin flinches when he sees Winnie and Kirk together, but as his mom says, “The great thing about a dance is you never know what will happen.”

One of the things that The Wonder Years really excels at is its sense of time and place. It inserts bits of culture and history as the characters hear about them or experience them and doesn’t spend a lot of time on exposition or commentary. It didn’t need it; the sixties were still recent history in the eighties, which obviously meant both Gen Xers and their parents would have very personal frames of reference.

Naturally, this varied from episode to episode, but in the case of “Dance With Me,” culture mostly came in the form of the current Top 40 songs of that time. Right before the dance there’s a montage in which the family shows Kevin their dance moves, and we get to hear “Louie, Louie,” “The Girl From Ipanema” and “Magic Carpet Ride.” In his room, Kevin boogies to “Born To Be Wild,” and at the dance we hear “Tears of A Clown,” which was used several times throughout the series. Then in the final moments we hear Otis Redding’s “I’ve Been Loving You Too Long.”

Another aspect of the series that really came off well was the chemistry between the actors. Even Daniel Stern, who plays an adult Kevin and is never onscreen with the rest of the cast, is lovingly wry. As for everyone else, they have the look actors seem to get when everything works, even when a story might be heavy. I think that’s one of the reasons people go back to the show even now is the enjoyment of seeing these people interact with each other. That, and I’m guessing people of my generation like sharing The Wonder Years with their own kids. It’s fun in a quiet, comforting way. 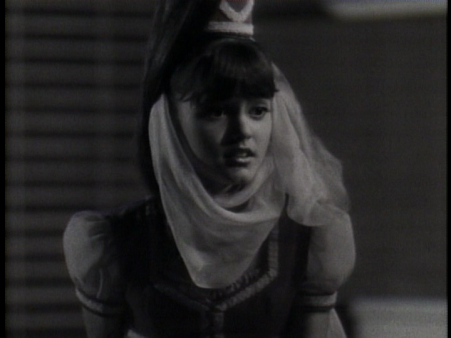 Now, I know the next obvious question is: Have I seen the remake?

Well, kinda. I tried watching the pilot, but it just didn’t grab me, and by the time I felt like trying again we had cancelled our Hulu account. Who knows, I might make another attempt if we get Hulu back. We’ll see what happens. Until then, I will happily stick with the OG.

For more favorite TV episodes, plus a tribute to our dear, departed friend, Paddy Lee, also known as Caftan Woman, please see Terence at A Shroud of Thoughts. Thanks for hosting, Terence–glad you brought this back again! Thanks for reading, all, and I hope to see you tomorrow for the Bustles and Bonnets Blogathon…

The Wonder Years is available to own on DVD from Amazon.

4 thoughts on “Shall We Dance?”