Well, folks, we’re happy to be back with you again, and on behalf of the Johnson Wax people and our cast, may we say that we’re not unconscious of the fact that these are serious days. –Jim Jordan of the Fibber McGee and Molly radio show, September 5, 1939.

On September first, Britain declared war on Germany, another step in the path to worldwide conflict. The last third of 1939 must have been surreal for everyone, because not much really happened. Britain didn’t drop any bombs on Germany and vice versa, and the only new development was a feeling of limbo. In fact, everything was so placid until April of 1940 that the standoff was dubbed “The Phoney War,” “The Twilight War,” and “Sitzkreig.” The Brits used the time to shore up their defenses, both in the military and at home, and almost forgot they were at war at all.

Meanwhile, across the sea in America, the prevailing mood was one of escape. We were coming out of the Great Depression and people were starting to feel prosperous again. Despite troubling news from overseas, we were safe from war for the time being and we liked it that way.

Hollywood in particular was feeling its oats, because it was right smack-dab in the middle of what we now call its Greatest Year Ever, with successful films coming out seemingly one after the other. Less than a week before Britain declared war, The Wizard of Oz hit cinemas nationwide, where it would stay until MGM theaters replaced it with The Women, which premiered on September first.

Both movies were lavish spectacles in their own way. The Women is full of high fashion and crackling, rapid-fire dialogue that’s at once funny and poignant. The Wizard of Oz is wistful and scary and colorful and in the end home-y. 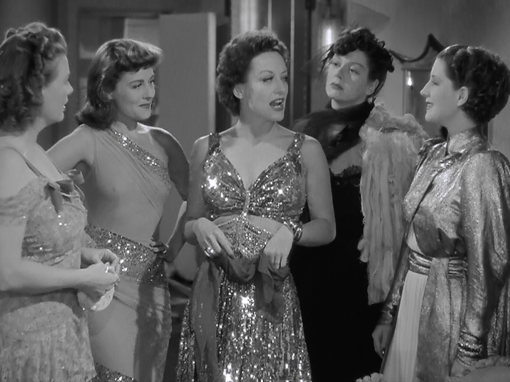 The main theme of many movies that year, particularly in the latter half of 1939, was how good we really had it in America. We had a proud heritage and a storied history. Ergo, in 1939 Americans saw movies like Young Mr. Lincoln, Drums Along the Mohawk and Union Pacific, which portrayed America as a tower of strength and courage.

While we weren’t perfect, there were always men among us brave enough to address our problems and call a spade a spade, and Mr. Smith Goes To Washington is one of the best examples of this. When James Stewart as Jefferson Smith gets up in the Senate for his filibuster, it’s a crash course in what makes America special.

Among the standout lines: “I always get a great kick out of…the Declaration of Independence. You’re not gonna have a country where these kind of rules work, if you haven’t got men that have learned to tell human rights from a punch in the nose.”

The film was initially hated by senators serving at the time as well as the press because it hit too close too home, but the passing years have been very kind.

Never ones for perpetual seriousness, America wanted to laugh, and after the war started Ninotchka was among the movies that granted our wish. An Ernst Lubitsch outing that featured Garbo, of all people, laughing, it was quite the eye-opener. The Great Lady of Film had a sense of humor, and Melvyn Douglas was the one to coax it out.

We also didn’t mind tooting our own collective horn. On Halloween, Babes In Arms arrived in theaters. Starring Judy Garland and Mickey Rooney, the film was loosely based on the successful Rogers and Hart musical of the same name and is the first of Judy and Mickey’s backyard musicals. 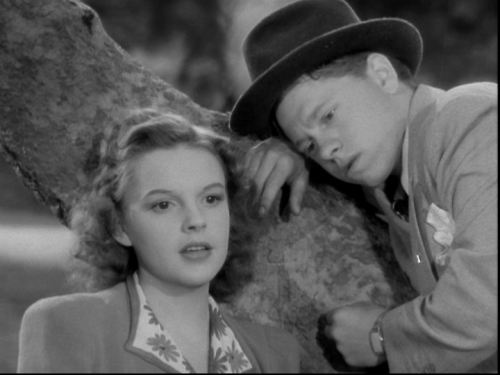 While a bit dated (there’s a brief minstrel show about halfway through), the film introduced the classic Arthur Freed and Nacio Herb Brown song, “Good Morning,” and another song, “God’s Country,” which was originally written by Harold Arlen and E.Y. Harburg in 1937. The latter, when arranged for the film, was at once a celebration of America and an MGM roll call. In fact, some of the lyrics had to be revised because the name-dropping got a little bit too heavy.

Here are the songs as presented in an MGM radio promo spot:

Fun as it all was, even the movies were conscious of the coming trouble. A great example of this is Gone With the Wind, which, coincidentally, was among the last films released that year. In a bit of pointed irony, the first scene shows Scarlett on her porch saying how tired she is of hearing all the war talk at parties and the Tarleton twins acting surprised that Scarlett isn’t eager for the South to fight.

War was on the horizon, though, whether Scarlett liked it or not, and whether America liked it or not. Soon we would long for those halcyon days when war was just talk and our world was still relatively safe, but until then, we would enjoy our lives and freedom, escaping from troubling news whenever we could. Hollywood was glad to be that escape.

As Jim Jordan went on to say that night of September fifth,

In bringing you a few smiles…we hope we are helping to lift your spirits a little bit. The only members of the animal kingdom who are able to laugh are human beings, so let’s stay human as long as we can. Thank you and good night.

Another post is coming up in a few days. Thanks for reading, all, and have a good one…