Happy Valentine’s Day! I’ve got a day off of work today. Don’t know why, but I’ll take it.

As we all know, randomness can a beautiful thing. Or not. When the 1988 rom-com, Vibes came up in my Amazon Prime suggested viewing list, I was instantly curious. Who wouldn’t be? This movie teams Jeff Goldblum with Cyndi Lauper, and it was directed by Ken Kwapis of The Beautician And the Beast fame. I think we’re gonna just dive right in here. 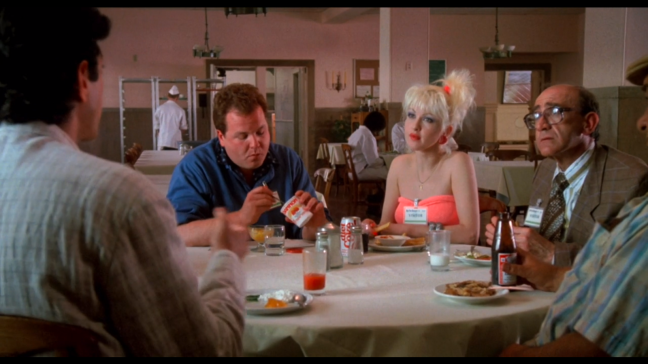 Sylvia (Cyndi Lauper) and Nick (Jeff Goldblum) meet at a psychic study at NYU. He can touch objects and know where they’ve been. Even picking up a seemingly innocent steak knife is traumatizing because it was used by an angry husband to stab his innocent wife. Sylvia is a trance medium with astro-projection abilities who talks to a friend of hers from the spirit world, Louise. Yeah, really. Louise is exceedingly helpful, and has Sylvia tell Nick his girlfriend, Hillary (Karen Akers) is cheating on him.

The study lasts for a week, and while Sylvia is making out with the distinguished Dr. Harrison Steele (Julian Sands), Nick notices a guy across the street taking photos of all of them. For some reason Dr. Steele sprints at the dude across the busy New York City roadway, but we don’t know how things end up. 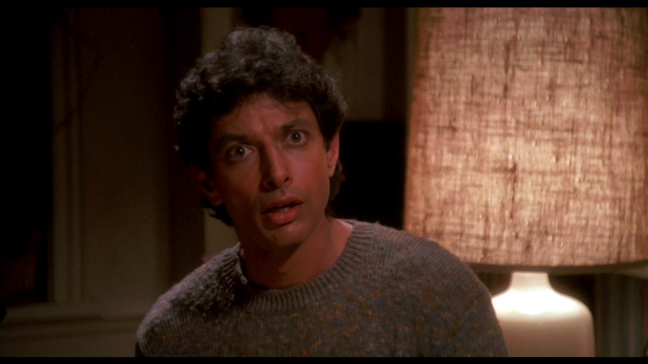 Nope, that’s because we have to watch these characters’ lives conveniently upend so the plot can move forward. Nick finds out that Hillary, who talks like a self-help book, really is cheating on him, but he doesn’t seem to mind too much. He also doesn’t mind quitting his job as a museum curator because he’s tired of people using him like Karnak in tweed, only with car keys instead of envelopes.

Meanwhile, Sylvia finds the weird guy who was taking Nick’s and her photos in her apartment, foraging in her fridge. She’s debating whether or not to blow him away with her shotgun when he promises to pay her wads and wads of cash if she helps him out. Suddenly she’s listening. 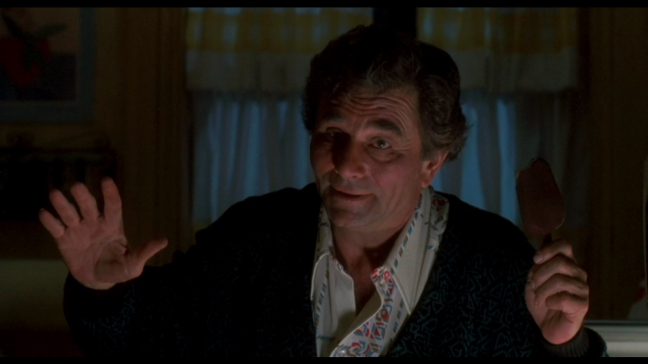 Long story short, Nick and Sylvia find themselves on a trip to Ecuador with the dude, whose name is Harry Buscafusco (Peter Falk), and there’s twenty-five thousand dollars apiece for them if they help him find his son, who disappeared in the mountains and hasn’t been seen since. He presents his son’s shirt to Nick, who holds it out like a divining rod and the three of them run to the foot of a mountain pass.

Funny thing about Harry’s story: It keeps changing. Nick figures out right away that the shirt doesn’t belong to Harry’s son. It’s been worn by a guy about Harry’s age. Heck, Harry doesn’t even have a son. What he really wants is help finding a wondrous city of gold…oh, wait, no, that’s not it, either. There’s a mysterious power source on the mountain and Harry wants help harnessing it because if this vortex falls into the wrong hands it would be very, very bad or something.

Even in the right hands it’s touch and go. Harry’s good buddy, Burt (Michael Lerner) is in the hospital because this vortex thingie packs quite a punch, He lays in his hospital bed looking like a zombie.

And just in case things aren’t exciting enough, Dr. Steele shows up with Ingo (Googy Gress), a creepy guy from the psych study because they somehow know and care that Henry is after this vortex and they think they’re more entitled to it than he is. Why, I don’t know, but nothing about this quest is urgent. Before the baddies slime in, Sylvia and Nick have a quick tango at their hotel, a hooker tries to kill Nick, Sylvia almost gets picked up by a visiting ambassador, and then our three intrepid vortex seekers load up their camping gear and head for the mountain.

Oh yeah, and our three have time for some near-meaningful conversation and attempts at romance between Nick and Sylvia. Things get cray-cray after that. A little too cray-cray, actually.

And if anyone is wondering whether Ms. Lauper sings in this movie, the answer is yes. Kinda sorta.

Vibes tried. It tried so, so hard. I tried, too. As in, I tried to summon any kind of energy for this film, and I just couldn’t. It took too many strange turns that didn’t need to be there, and forcing characters that should have been disposable into token-y villain roles. I checked out when Dr. Steele and Ingo showed up in Ecuador. It was too much out of left field.

Even just remembering the characters’ names was a struggle and I had to keep the movie’s IMDb page on standby. Say what anyone will about the shady accuracy of IMDb, their vital stats game is pretty on point. But I digress. 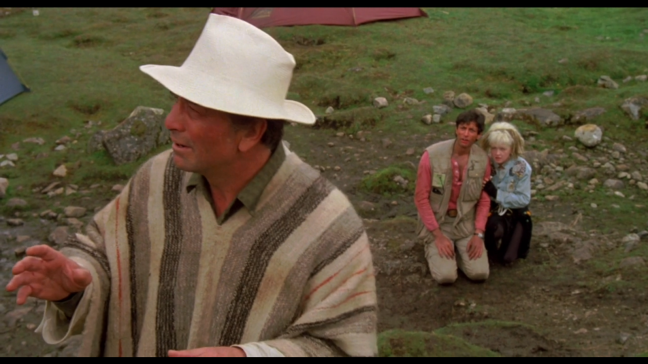 Not surprisingly, Vibes didn’t do at all well at the box office, and the movie currently has a fourteen percent critics’ rating on Rotten Tomatoes. The audience score is slightly higher, but a little over half of the respondents liking Vibes isn’t much better. I guess enjoyment of this movie hinges on how much one has seen of these actors in better roles and how far one can suspend disbelief and credibility. It’s fairly watchable, but it’s by no means memorable or remarkable.

Movies like “Vibes” appear and disappear like fireflies in the dog days of summer. Nobody seems to have made them, nobody sees them, nobody remembers them. Five years from now, Goldblum will be asking himself what the title of that movie was that he made in the Andes.

It’s not going to take me nearly that long. A new installment of “During World War Two” is coming up tomorrow. Thanks for reading, all, and hope to see you then…

Vibes is available on DVD and Blu-ray from Amazon.