Fran Drescher’s brand always seems to be that of the big-haired, nasal-voiced misfit creating her own niche (Who remembers The Nanny? Or that pantyhose commercial?), and what I always liked about her was that she was hard-boiled and innocent at the same time. One of her few feature films, 1997’s The Beautician and the Beast looked pretty cute when I saw the trailer on TV. Watching it was a different story, though–I turned it off after ten minutes or so and forgot all about it.

Well, that is until my friend, Gill of Realweegiemidget Reviews tagged me to review it (read her take here), bringing my own “Pick My Movie” tag back to haunt me. Did I get through The Beautician and the Beast this time? Ah…yes and no. 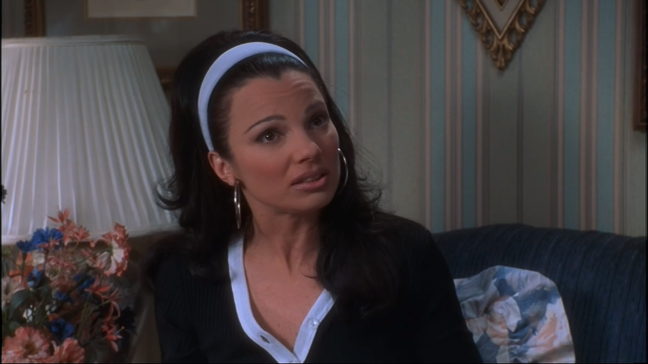 Joy Miller (Fran Drescher) longs to be a makeup artist. She’s tired of teaching beauty in the science lab at a local school and wants bigger and better things. Problem is, no one will give her a chance, not even the producers of the nightly New York Lotto segment. Joy could marry and settle down, but she feels like something is missing.

One night at her beauty class one of Joy’s students lights his cigarette on an open flame. Naturally the wig on his model head catches fire, and someone accidently uses hairspray instead of Evian as an extinguisher, which naturally causes the whole room to go up in smoke. Amazingly enough, Joy makes out like a heroine when she saves the lab animals, so it’s all good. Well, except for the part about her classroom getting burned up.

Things get even better when she’s asked to tutor the children of Boris Pochenko (Timothy Dalton), the president (Read: dictator) of Slovitzia, a tiny country sandwiched between Hungary, Romania, and the Ukraine. He wants his children to be exposed to Western culture, and he’s willing to pay. A lot.

Only problem is, Ira (Ian McNeice), the aide who recruits her, does so under the illusion that Joy is a science teacher. He wilts in embarassment when Joy starts massaging hair gel into his coiffure and asks for a supply of mousse to be delivered to her classroom.

President Boris is a rather imposing fellow and a workaholic who reads various newspapers at breakfast while his children sit at the other end of the table forlornly eating. Joy’s first meeting with the kids is a little strange–she wakes up to find all four of them standing stiffly around her bed staring at her.

The kids are not low-maintenance. Karl (Adam La Vorgna), the oldest, is supposed to take over for his dad but he really wants to be an artist. Katerina (Lisa Jakub) is in love with an imprisoned rebel named Alek (Timothy Dowling) who holds meetings in an underground club. Masha (Heather DeLoach) is incredibly shy and hides behind whatever she can. Yuri (Kyle Wilkerson), the youngest, is a nail-biter.

Joy might not be a tutor in the traditional sense, but she has her own ideas about the job, and after some macaroni art and a viewing of West Side Story, her four charges are pretty comfortable with her.

Who knows, Boris might even loosen up himself. Joy finds out he really likes white meat turkey and a lot of mayo on his sandwiches, and introduces him to various peasants around the countryside. In what is perhaps her most radical reform, she shaves off Boris’s mustache. Now if he could just present himself as a forward-thinking man to the rest of the world and win over his countrymen, some of whom are about to revolt because the country is broke. And there’s the question of letting Alek out of the castle dungeon. Tricky situation, this. 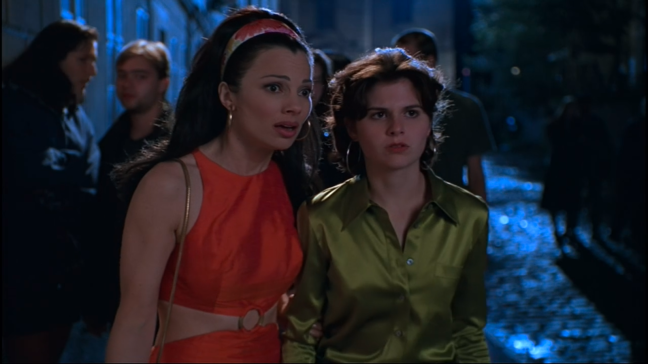 While I managed to get through Beautician this time, it didn’t really grab me, probably because I could predict what would happen from a mile off. The title is a total giveaway, for one thing, and the film doesn’t really break any new ground in terms of plot. It’s The Sound of Music meets James Bond meets My Fair Lady meets The King and I meets, well, The Nanny, although sans the finesse that made those other photoplays memorable.

Plus the script is woefully underwritten; I couldn’t see Dalton as anyone but Bond and Drescher as anyone but Fran Fine. Plus the kids lose their accents after the first few scenes, making the movie seem more like a WB show set in Eastern Europe. Either Joy is a way better teacher than she’s given credit for, or…

Now, the movie does have its moments. Joy and Boris have a lot of cute scenes together, so the movie isn’t quite as bad as it could be. All the late-nineties expressions are fun, like, “Talk to the hand,” which went out of fashion as quickly as it went in. I’m just glad no one says “Not!” in the movie because that schtick was annoying even when it was trendy.

Unfortunately Beautician doesn’t lean into those cute moments enough and goes for the jump-scare kind of comedy instead, which can come off well or not. In this case there’s more than a little of the not, like when Joy tells her mother she’s too attached to her and Joy’s mom brandishes a jar holding her daughter’s umbilical cord. Gross. Feel free to dry retch or something. I happened to be eating a KitKat during that scene and almost spit it out. It wasn’t pretty.

I didn’t hate The Beautician And the Beast, but I didn’t love it, either. I think it would have been better off as a TV movie or even a series. Much as I like Fran Drescher, and she seems like a nice person, her particular type of comedy is best in small doses, not to mention she deserved a better film than this.

Okay, because backsies are completely fine in the Pick My Movie Tag world, I’m hereby tagging Gill to review something from her watchlist. It doesn’t matter if it’s physical or streaming, but the longer it’s been on the list, the better. All right, thanks for reading, all, and see you tomorrow with another post…

The Beautician And the Beast is available on DVD from Amazon.

6 thoughts on “Shamedown #1: The Beautician And the Beast”