Felix Bressart was a familiar face on the big screen in the nineteen-forties. Affable, supportive, and a little goofy, Bressart was typically cast as the friend, the co-worker, the genius, sometimes the buffoon, or maybe a combination of all of those, but whatever shoes he landed in, he was always a welcome sight.

Bressart was born in Eydtkuhnen, East Prussia, which is today part of Russia, on March 2, 1895, and had a respected career on both the stage and screen in Germany, starting in 1914. In fact, he was the highest paid actor in Germany, often playing troublemakers who leave all kinds of comic distaster in their wakes. Being Jewish, Bressart was forced to flee Germany with his wife when Hitler came to power, and he eventually made his way to the United States.

So how did he become involved in American movies? A friend, Henry Koster, asked him to take a part in 1939’s Three Smart Girls Grow Up, and the rest, as they say, is history.

One of the unique aspects of this time is that it ushered in a very specific genre known as émigré comedy, which was Jewish comedy rebranded. Made by Jewish exiles from Nazi-occupied countries, émigré comedy allowed expats to skewer the Nazis, which they could never have done if they stayed in Europe. Ernst Lubitsch was one of the genre’s patron saints, and it kept Bressart very busy.

While Bressart was a prolific actor, he never watched any of his own movies because he didn’t like seeing himself onscreen. He did, however, enjoy donning fake mustaches for his parts, which became both a trademark and a security blanket–Bressart said he felt like a nudist without one.

The Bressart filmography is diverse, albeit with an overall theme, and I thought I’d present a smattering of his mustaches, er, movies, most of which I’ve reviewed on Taking Up Room. Without further ado…

Bressart worked with Ernst Lubitsch several times, and one of the first was Ninotchka, a nice light comedy contrasting eastern and western Europe. Its primary selling point was “Garbo Laughs!” but there was much more to it than that. Bressert is Buljaroff, a happy-go-lucky friend of the title character who is really good at enjoying life. He and his two buddies are supposed to be helping Ninotchka on a serious mission for the Soviets, but once they get a taste of Western decadence they can’t get enough of it. Read my review here.

This Ernest Lubitsch classic never gets old, and Bressart plays Pirovitch, Kralik’s (James Stewart) friend and co-worker at Matuschek and Company. Pirovitch hates making waves so much that he lets his boss call him an idiot and does his darndest to avoid giving his opinion about anything, but it’s all in good fun. Speaking of fun, Bressart shines in the iconic sidewalk scene when Pirovitch spies on Kralik’s mystery date. I defy anyone to watch Dave Chappelle in You’ve Got Mail without thinking of Felix Bressart, unless, of course, they haven’t seen The Shop Around the Corner.  Read my review here.

Bressart plays Fritz Keller, servant to Mark Preysing’s mother, Emmy Ritter (Nazimova), and he’s mainly there to advise Mark as to the delicate situation he and his mother are in. Well, that, and Fritz has been conscripted to bury Emmy when she dies. Bressart’s part is pretty beefy in this film, which includes a daring escape from a concentration camp and is well worth watching. Read my review here.

Here Bressart is a violinist named Mischa, who’s not only a terrific musician but a standup guy who gets his friend Franz (Philip Dorn) an audition with the Follies orchestra. Franz doesn’t get the job, but his wife, Sandra (Hedy Lamarr) is picked to be a showgirl. Since the story focuses on Hedy Lamarr, Lana Turner, and Judy Garland, Mischa’s not terribly visible in the film; however, he does help Sandra at a crucial juncture even though he thinks it’s all crazy. Read my review here.

Another Ernst Lubitsch outing, To Be Or Not To Be is the story of a group of Polish actors who join the resistance and use their talents to thwart a Nazi plot. Bressart plays frustrated bit player Greenberg, and while his part is small, it’s juicy and really allows him to flex his considerable talents. In my opinion, To Be Or Not To Be is one of the best satires of the Nazis next to The Great Dictator. And since it was made by mostly Europeans, many of whom still had relatives in occupied Europe, it must have been cathartic. A listicle blip doesn’t do this movie justice, so I will be giving it a full review someday.

In the crazy, colorful candy box that is Greenwich Village Bressart plays Hofer, a lovable klepto who makes off with the sheet music for Kenneth Harvey’s (Don Ameche) concerto (it’s a flowery version of “Whispering,” by the way). All is not lost, because a certain prestigious conductor has been promised the concerto, and there’s a big show coming up, so Hofer just might have to pay the piper. No one seems too mad, though, because it’s a musical, and everything winds up happily. Read my review here.

Sadly, Felix Bressart’s career ended when he died of leukemia on March 17, 1949 while filming My Friend Irma. He was only fifty-four. It’s interesting to consider where Bressart’s career would have gone, but as it is, he’s a firm fixture in a lot of beloved movies. 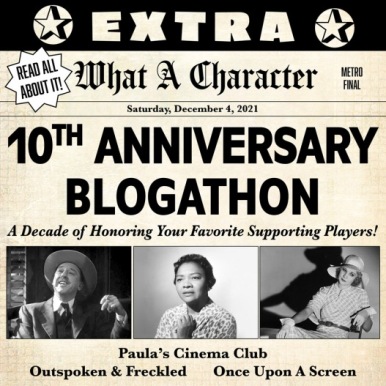 For more great character actors, feel free to visit Aurora, Kellee, and Paula. Thanks for hosting, ladies, and congrats on ten great years of What A Character! Thanks for reading, all, and see you on Tuesday for another post…

13 thoughts on “Hanging Out With Felix Bressart”