On to our second gallery of Gilmore Girls luminaries, and as you’ll no doubt notice, the names here are decidedly bigger than yesterday’s, not that yesterday’s were too shabby or anything. Again, I had to make a lot of deep cuts, but it’s all good. Off we go…

Two years before she donned Chilton’s blue plaid, Liza Weil played art student Anna in the 1998 indie, Whatever, another take on the Anywhere But Here concept. Amazingly enough, Weil’s character in the film was closer to the boy-crazy Madeline and Louise than the straitlaced, neurotic Paris Gellar.

Jared Padalecki made his debut in the 1999 film, A Little Inside, about a professional baseball player, Ed, trying to raise his daughter all by himself. Padalecki plays mechanic and baseball fan Matt, who is overjoyed to meet his hero.

One of the future Jess Mariano’s first credits was as jock Letterman(!) on the “Terrible Things” episode of Sabrina the Teenage Witch. When Sabrina’s friend, Jenny runs for sophomore class president, Letterman asks her to do something about the terrible school meatloaf.

Way before he was Michel, or had even emigrated to the United States from his native Canada, Yanic Truesdale had a teensy part as a patrolman on the “The Real Deal” episode of  The Sentinel. Truesdale doesn’t look all that comfortable, to be honest, probably because it was one of his first English-speaking roles, but we all know he got better. And as Michel, he made discomfort work for him.

I think we all know where Kelly Bishop’s been, but besides her turn on Dirty Dancing she landed a guest spot on the “Intolerance” episode of Law and Order, playing Marian Borland, a woman whose son is accused of killing his classmate.

The late great Edward Herrmann was a mainstay of documentaries and TV movies, but he also portrayed piano-playing Klipspringer in 1974’s The Great Gatsby, alongside Robert Redford, Sam Waterston and Mia Farrow. Even though his part isn’t big, he’s definitely memorable.

All In the Family. ‘Nuff said.

Similar to many of her costars, Melissa McCarthy was new to the screen around the time she made Gilmore Girls, and just prior to becoming Sookie St. James she was Shirley in the 2000 murder mystery, Drowning Mona. Unfortunately, like a lot of McCarthy’s later movies it doesn’t come off very well, but at least she got her foot in the door.

In what was only her second film credit, Keiko Agena had a bit part on the “Kid In Play” episode of Sister, Sister. Her time onscreen is so tiny that her character is referred to as “Student Interviewer,” but it’s fun seeing her when re-watching the show nowadays.

Gilmore Girls was Alexis’s first big speaking role, or any kind of speaking role, for that matter. Her one and only screen appearance prior to winning the part of Rory was as an extra in the 1998 film, Rushmore, where she can be seen in two scenes. I wouldn’t recommend this film because of its strong sexual references, but it’s well-loved by Wes Anderson fans. 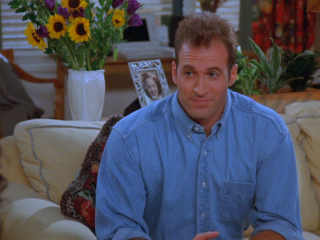 Luke and Lorelai, together again, because Lauren Graham and Scott Patterson both made guest appearances on Seinfeld. Scott shows up in the Season Seven episode, “The Sponge,” in which Elaine ponders whether he’s worth dipping into her store of her favorite (and doomed) brand of contraceptives. Spoiler alert: Billy is sponge-worthy. His clean bathroom and promise to trim his sideburns clinches things.

Lauren, on the other hand, is in “The Millenium”, a Season Eight jaunt in which Jerry dates Valerie, a woman who loves her speed-dialer. Jerry’s elated at first because he goes from Number Seven to Number Nine to Number One, but unfortunately Valerie’s stepmother is equally obsessed with speed-dialing. And she’s a bit of a cougar. It all winds up as only a Seinfeld episode can.

Where have you spotted Stars Hollow alumni? Feel free to comment below. And I hope to see you all tomorrow, because there’s going to be another little announcement. Thanks for reading…

Gilmore Girls is available on DVD from Amazon.