OK, I know I just did one of these “Reasons” posts, but 1951’s The Day the Earth Stood Still is another classic movie that deserves to be discovered or re-discovered.

The film starts out pretty basic, with a flying saucer, a Cylon-ish robot named Gort, and a spaceman in a silver suit saying he comes in peace, but this is only to lull us into complacency. There’s more here than meets the eye.

What makes the film worth watching? Well…

This guy is cool. He’s kind. He has a sense of humor. He comes in peace. He speaks perfect English and, no doubt, any other language he fancies. He can solve complex equations that have one of the most brilliant minds in the world stumped. He pays his bills with precious stones that look like diamonds.

Despite all of these obviously good qualities, the movie initially presents Klaatu as slightly menacing. He’s often lit from the back, he’s a bit of a sidler, and oh yeah, he’s from another planet. However, his menace lies in his being an unknown quantity. Once he presents his case, he’s an ally. He’s got a Christlike ace up his sleeve as well, which I won’t ruin. It’s about as subtle as a traffic light, anyway.

What’s really amazing is that the producers very briefly considered having Spencer Tracy play Klaatu, but they quickly realized Tracy’s formidable self would overshadow their character. They also toyed with the idea of Claude Rains in the role, but then dropped him for the same reason. Michael Rennie was an ideal choice because he wasn’t terribly gregarious, and at the time he was unknown away from the English stage.

The crisp direction and acting.

For a sci-fi film, Earth is sedate. There aren’t a lot of gimmicks or weird angles, Everyone plays their parts absolutely straight, because it’s important that everyone, audience and cast alike, believe what’s happening. The scenes are lit very simply and starkly, with the focus just under deep. It’s meant to look as realistic as possible.

There are some familiar faces among the cast as well, such as Frances Bavier, best remembered as Aunt Bea on Andy Griffith, as Mrs. Barley, and Sam Jaffe as Professor Jacob Barnhardt.

One of the things I appreciated about Earth was how empty the spaceship was. Does that seem weird? As we’ve all seen, sci-fi movies tend to be crowded with details. There are usually lots of gadgets and lights blinking, maybe some exposed coils, and, depending on the film, sparks flying and smoke billowing. It might be dirty or clean, but either way, it’s crowded.

The Day the Earth Stood Still doesn’t have any of that. The bridge of Klaatu’s ship is round, with bright walls and translucent coils. There isn’t a speck of dust anywhere. The control panel is barely there; just Lucite and a few lights. It reminded me of German expressionist films from the twenties and the thirties. It also made me wonder where Klaatu slept and ate, because there didn’t seem to be anything else but that Lucite panel.

It turns accepted tropes on their heads.

Aliens coming down to Earth from outer space to take out mankind is as common as phasers on stun. In The Day the Earth Stood Still, however, mankind threatens the universe, and I’m not gonna spoil anything, but according to Klaatu we’ve gotten too big for our britches. About half the humans he comes in contact with only prove his point. Klaatu’s fellow aliens aren’t about to sit back and hope we get a clue, either, so Klaatu is on Earth to warn us of impending doom.

And where most sci-fi tends to wrap up more or less neatly, The Day the Earth Stood Still is open-ended. The movie’s obvious subtext is that its story is more real than we might know and it’s still going on. What are we going to do with this knowledge? That’s up to us. 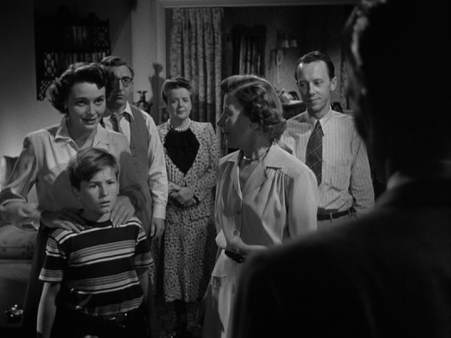 Herrmann used electric violins and electric bass for Earth‘s soundtrack, in addition to a Theremin, which turned heads right away. The funny thing about the music is that a lot of times it fits the scenes so well it’s often barely noticeable; it seamlessly goes between symphonic and outer-space-y, with a lot of the weird sounds we expect from a sci-fi film. Amazingly enough, Hermann’s score was passed over by the Academy, although he did get a Golden Globe nomination.

Earth is based on a 1940 story called “Farewell To the Master” by Harry Bates, but it takes place in flashback and has barely any resemblance to the movie whatsoever. It starts out at a museum, where the events of the story are a curiosity and a marvel to the public. Klaatu’s part is very minor, whereas Gort (who’s called Gnut, by the way) has control over, well, everything. There are also gorillas and a reporter named Cliff. It’s pretty messy. I don’t know why stories like this get optioned for movies, but the filmmakers must have liked Klaatu and his flying saucer enough to pluck them out. It’s pretty safe to say the movie has had a longer life than Bates’s story.

Reviews of the film were mixed at the time of release. Bosley Crowther of the New York Times called it “tepid.” Variety was more enthusiastic, but only slightly, calling Michael Rennie “fine” and Patricia Neal “attractive and competent.” Critics since then have pretty much warmed up to the film–Leonard Maltin, for one, called it “brilliantly acted” and the script “trenchant.” 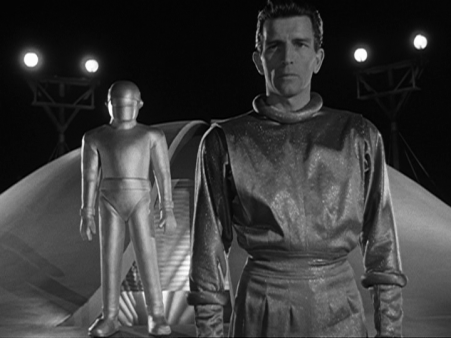 I agree with Mr. Maltin. The film might be a little tame compared to its successors, but it’s not to be missed, especially for sci-fi lovers.

For more of the great Bernard Herrmann, please see The Classic Movie Muse. Thanks for hosting this–it was fun! Thanks for reading, all, and I hope to see you tomorrow for Hoofers and Honeys’ 2nd Annual Spooky Movie Blogathon…

The Day the Earth Stood Still is available on DVD from Amazon.