Anyone who’s ever watched a documentary about film history, especially of MGM, has probably seen a shot of John Gilbert lunching with a group of his fellow stars. That clip comes from 1928’s Show People, a fantastic Marion Davies vehicle that’s beloved by film buffs and geek bait for historians.

Peggy Pepper (Marion Davies) and her dad, Colonel Marmaduke(!) Pepper (Dell Henderson) are speeding through Culver City on their way to MGM to see the casting director. It’s the usual thing: Smile pretty and show me your glossies.

While eating in the commissary later, Peggy and the Colonel meet a cute young guy, Billy (William Haines) who pegs the two of them as hopefuls, or, in his word, “punks.” At first Peggy is highly affronted at this ruffian who plops down at their table with a plate of spaghetti, but she likes him in spite of herself. Billy’s a natural schtick man, and he’s more than willing to show Peggy the ropes. 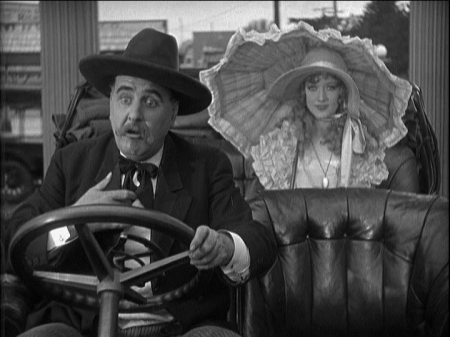 Peggy’s debut is rather inauspicious, as her first scene involves a faceful of seltzer water. Billy gives her a friendly pep talk while wiping her face and fixing her lipstick. If she wants to be in the movies, she’s got to take it on the chin.

Well, Peggy not only takes it on the chin, but her first movie is a hit and she becomes a big star. It’s only a matter of time before High Arts Studio (read: MGM) comes calling and Peggy becomes a Serious Actress. Just her, though. Peggy is sorry to leave Billy, but he talks her into it. Even though the two of them won’t be able to see each other as often, it’s a great career move.

Peggy goes like gangbusters into her new status as an A-lister. She eats with her fellow stars, wears the finest clothes, and puts on affectations, including one frequently-used facial expression that looks like Punxsutawney Phil sucking lemons. Really, that’s the best descriptor I can come up with–it just has to be seen.

And Peggy gets an attitude. The head of the studio wants to meet with her? He’s got to wait until after lunch. Poor Billy tries to come around for a visit, but Peggy acts as if he’s a lowly, vulgar comic and takes up with Andre Telfair (Paul Ralli), who claims to be a count.

Despite Peggy trying really, really hard to fit into the Serious Actor shoes, the public begins to sour on her. Can a marriage to the Count fix everything? And why can’t she stop thinking about Billy? The ending credits won’t roll on Show People until all these questions are answered and more.

Show People is adorable. Like A Star Is Born, only way less depressing. There are lots of hugs and no one ever quite hits the curb. There’s always something to break the fall, whether it’s a smile or a pie in the face. Take that as you will, because I’m not giving spoilers. It’s too good for that.

Because the film came out in 1928, it has music and a few sound effects, especially audiences laughing, but no audible dialogue. It doesn’t need it for so many reasons, but it’s interesting to think about what would have happened if it had come out post-Jazz Singer.

One of the coolest things about this movie is that it shows both the Essenay Studio, which was demolished soon after the film’s release, and MGM as it was during the tail end of the silent era. The filmmakers run all over the studio, from the long-gone glass soundstages, to the commissary, to the lawns outside, to the famous gates on Washington Boulevard, to the dressing rooms that are used for offices today. It’s almost like found footage, because the film takes place in the midst of whatever was going on at MGM during the shoot. Nothing was changed. It’s something between time travel and really deep navel-gazing, and it’s just so danged eye-popping.

And there are celebs galore. MGM loved promoting their galaxy of stars in their films, and Show People is a great early example of this. There isn’t a lot of name-dropping, but these people don’t need introductions. Charlie Chaplin makes an appearance, as does the aforementioned John Gilbert, plus Norma Talmadge, William S. Hart, and about a dozen blink-and-you’ll-miss-them star sightings. There’s even a short cameo by the film’s director, King Vidor, who later would work with Davies on The Patsy.

Oh, and speaking of deep navel-gazing, Marion Davies does a cameo as herself, staying onscreen just long enough for her counterpart to get stars in her eyes. It’s one of the few bit appearances the movie announces, natch.

The casting is great too, but Marion Davies is Show People’s one and only queen. She produced the film and she dominates the film. While Peggy is supposed to be a parody of Gloria Swanson, she’s pure, unadulterated Davies, who was such a natural comedienne. I suspect about thirty to forty percent of the gags in this movie were ad-libbed, because Davies was famous for off-the-cuff cutups. It’s almost a hundred years since Show People came out, and it still works. She and William Haines were clearly having a ball from start to finish, too.

I know I’ve said Peter Pan and The Cabinet of Dr. Caligari are ideal first silent films, but Show People is another treat. It easily makes the silent film newbie forget about the lack of audible dialogue, and it’s a rare glimpse of places that no longer exist. 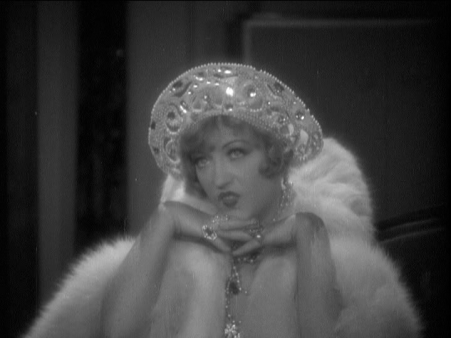 For more superb silents, please see Lea at Silent-ology and Crystal at In the Good Old Days of Classic Hollywood. Thanks for hosting this, ladies–Silent Movie Day is a blast! Thanks for reading, everyone, as always, and I hope to see you tomorrow for Michaela’s Biopic Blogathon…

Show People is available on DVD from Amazon.

13 thoughts on “The Rest of the Movie”