My son seems to have caught the bad movie bug. He loves finding terrible stuff on Internet Archive and YouTube. Or Amazon Prime. He’s not terribly picky, although my husband and I have taught him to avoid torrent sites like the plague. So yeah, I think I’ve created a monster, and one of his latest finds is the 1977 scifi thingie, Cosmos: War Of the Planets.

It’s got nothing on Cosmos. Cosmos makes Batman and Robin look like Laurence of Arabia. Heck, James Nguyen of Birdemic fame should feel pretty good about himself, too.

Let’s begin, shall we? 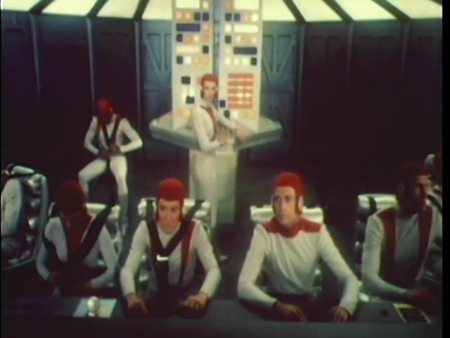 The movie starts off with an explosion and the crew of the MK-35 have to take evasive maneuvers. An asteriod seems to be heading straight for them, and one of the crewmembers, a woman, ducks. She’s the only one who reacts at all to the impending doom. Everyone else stares blankly, except for one bearded guy who sits in front of the screen calmly eating oyster crackers. Then the film cuts away to an obvious miniature of a spaceship flying through completely empty space, and everyone celebrates, because hey, we beat the big, bad space rock that is suddenly nowhere to be found!

Then we’re treated to white space debris and a few scattered rocks floating by during the opening credits, which give absolutely no information about character names or anything that might help us make sense of the monstrosity that’s about to unfold. Cosmos isn’t out to spoon-feed its audience with flotsam like cast info. Oh, no–we’re here for all the flinches.

Everything on earth and in space is controlled by the unfortunately-named WIZ computer system, which Captain Fred Hamilton (John Richardson) has a hate-on for because he doesn’t want to take orders from a machine. Or from this guy named Miller (Jacques Stany), who he lays flat with a punch.

As punishment, Fred’s assigned to captain a spaceship, the MK-35, heading to the Vega Sector, and right after he floats out there, a guy named Peter is living dangerously by trying to fix a battery by himself, the rogue. It doesn’t end well, and Fred has to help him. 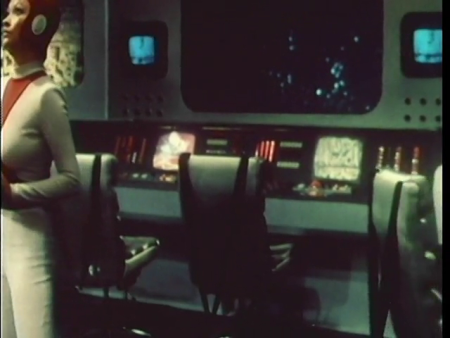 Then the crew starts getting weird orders from WIZ, but Fred dismisses them by saying the computer is a drunk. However, WIZ is scrambling radio and TV signals on Earth and the powers that be want to know why. Fred has to solve this mystery or his career will be in jeopardy, and his pleas for his deployment-weary crew fall upon deaf ears. WIZ must be appeased, though, so it’s heigh-ho for deep space or something. It’s all a sweet deal, though, because the MK-35 crew will be heroes and followed continually by journalists from all over the world. Yes, the dialogue literally reads like that.

In a supreme bit of illogic, Dr. Jane Frazer comes on the screen and tells Fred he should let the crew decide whether or not to go on this dangerous mission because it’s the democratic thing to do. What?! Fred’s just been lectured by his superior officer about how his job’s on the line, but he should definitely take on the mission because he’ll be a hero, and now this Dr. Frazer is telling him to leave the decision up to the crew? Pick a side, Cosmos. This is just weird. Especially since we already know what Fred will decide, seeing as there’s an entire hour of movie left.

So then the crew rockets off to this distant planet that just happens to have similar atmosphere and topography to Earth, which means they can move about freely, and they do, carrying metal detectors and Roentgen counters. The planet is populated by silver men but they’re fairly friendly. It’s a good thing, because there’s a robot galumphing around with a head like a big rig and legs like the Tin Man. He’s a wee bit scary, or at least he’s meant to be, but he made me think of a certain Beastie Boys song. Naturally the WIZ is still a thing, too. And none of the good guys should presume to think they’ve won anything until certain influences are ejected from their lives.

That’s pretty much the entire movie, and it’s not as spoiler-y as it seems. I guarantee it.

Ugh. It’s proper for a good film critic to allow even a bad film to make its case, but Cosmos pleads out. It knows it’s a bad movie.

The story’s cohesion is shaky at best, and Dr. Frazer’s speech at the beginning is just the start of the mess that is Cosmos. The movie’s editing is completely choppy and weird. Like, when their crewmates have their trouble with WIZ on the mysterious planet, two characters left back on the ship decide to, well, have sex. They do this a couple of times during the movie, only it’s not exactly conventional, involving laying down on twin beds with this odd orb between them and cueing up various films to play behind them. Apparently it does the trick.

Then there’s the dialogue. Oh, the dialogue. Most of the time it’s merely clunky, but more often than not it’s hilariously awkward.

“Spaceships in that pile of space?”

That line actually exists. Yes, I’m holding back. Anyone who watches Cosmos will have a bellyfull of howlers, even if they never look at the screen.

Now, let’s move on to special effects. This movie has some perspective problems. Like when Peter is out repairing that pesky battery. He’s gigantic and the nearby ship in the background is tiny. He also does a lot of forward somersaults when he’s supposed to be working. 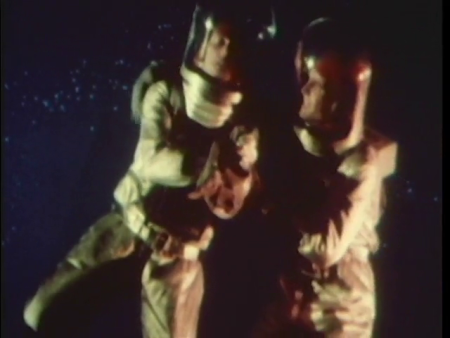 And about that other ship in the background: It must be the ship that always appears on the MK-35’s viewscreen, either ahead of them or floating past, despite the MK supposedly being the only ship on their dangerous mission deep in space.

We also see shadows of the actors during their spacewalks, really awkward angles and cuts, and props that can’t seem to stay together. Like in the beginning of the film, things get off to a great start when a crewmember’s strap falls off his shoulder. Or the ship’s doors opening and closing so slowly that the actors actually zone out while they’re waiting for something to happen. 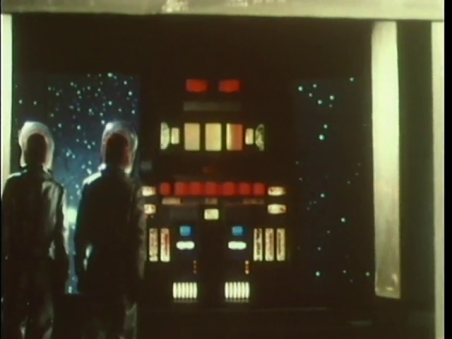 Cosmos was supposedly a Star Wars coattail-rider, but it looks more like 2001: A Space Odyssey, what with WIZ turning on the human race and all. It even has cheap Strauss-ish Muzak blaring over some of the space scenes. The film was such a turkey, though, that it was quickly discarded into the Phantom Zone of public domain, and cuts of varying length and quality float around the Web to this day. The title, dubbing and cast listing aren’t even consistent–that’s how much the film industry doesn’t want any part of Cosmos.

Other people who have written about this movie have said that one’s experience depends on which cut one watches, but I have to disagree at least partly, because Cosmos is so bad that even a director’s cut would be atrocious. No matter what, it comes off like drunken ramblings. Some of it’s hilarious, most of it is pretty boring, and anyone who sees it may crave a prairie oyster and some aspirin out of sympathy for the actors.

The Peter Lawford Blogathon is coming up tomorrow. Thanks for reading, all, and hope to see you then…

Cosmos: War Of the Planets is available on DVD from Amazon or can be streamed on YouTube.

5 thoughts on “The Movie Is Drunk”