One of the most popular characters on the Christy TV show was, by far, Doctor Neil MacNeill, and one of the most popular show arcs was the triangle between Christy (Kellie Martin), Neil and preacher David Grantland (Randall Batinkoff). Neil was wonderfully played by Stuart Finlay-McLennan, who seemed to burr with the best of ’em.

Only one thing: Finlay-McLennan is an Australian from New South Wales. His burr was about as Highland as Scotch tape.

Here’s a clip of Finlay-McLennan as McNeill in the Christy pilot:

And one of him talking in his regular Aussie:

So what do you think? Does Finlay-McLennan nail this Scot thing, or does his Doc have a lot of Oz in him?

There’s not much information out there about how Finlay-McLennan won the role of Dr. MacNeill (like, none), so we don’t know if he had any competition for the part, but he plays his role with such intensity that it’s obvious MacNeill was cast correctly. Finlay-McLennan has been typecast ever since, which is probably why his filmography is fairly short. I can’t watch him in National Treasure without calling him Neil MacNeill even though he’s playing Powell, a bad guy with an American accent.

Doc MacNeill isn’t the only Highlander in Christy. The TV series explored Cutter Gap’s Scottish heritage in a different way than the original novel, which mainly went into Highland songs and stories with a touch of Gaelic here and there. The Cutter Gap women also used folk remedies to treat illnesses. Other than that, the Scottish influence in the book is very subtle. Neil doesn’t seem to have an accent, either.

On the series, however, Scotland is on full display, starting with the “Lost And Found” episode in Season One. Neil tells Christy’s students the history of their ancestors and Bonnie Prince Charlie, which inspires Rob Allen to write about his family heritage for a short story contest. The Allens also get help from an unlikely source when they face a crisis. 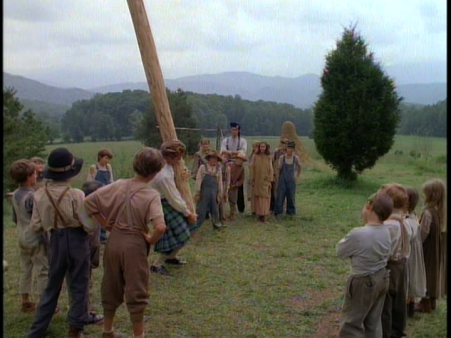 In Season Two’s “Babe In the Woods,” we’re treated to full-on Highland games when Neil and David challenge each other to a sporting competition. The old standbys like the caber toss are in play, but beings it’s Cutter Gap we’re talking about, some events seemed to have been improvised. Neil has the kids pretending to pitch a sack of flour and hitting pegs with a mallet. David tries his hardest, but the caber toss in particular is beyond him.

However, turnabout is fair play, and when David stages a baseball game the good Doctor strikes out at the bat. The episode ends with a friendly arm wrestling match accompanied by a plate of cake and a pitcher of lemonade.

In another episode, “Ghost Story,” Christy attempts to dispel a local superstition by using an old rhyme to uncover the story of the O’Teales, who are just above outcasts in Cutter Gap because one of their ancestors was said to be a traitor. It goes without saying that she and her students get more than they bargain for.

Finlay-McLennan was among the few original cast members to return for the Christy reboot, but the new show was a yawn, because everything that gave the series texture and motivation and interest was missing, including the Scottish cultural influences. I tried watching it once, but it was so depressing I sold my VHS copies as soon as I could.

The first series, on the other hand, is still a favorite with many, many people, and no doubt the Scottish flavor is one of the highlights.

For more not-true-Scotsmen, please see Gill at Realweegiemidget Reviews. Thanks for hosting this, Gill–you and your Dear Hubby had a great idea! As always, thanks for reading, and hope to see you on Thursday for a review of a really bad movie…

Christy: The Complete Series, Return To Cutter Gap, A Change Of Seasons, and Finding Faith are available to own on DVD from Amazon.