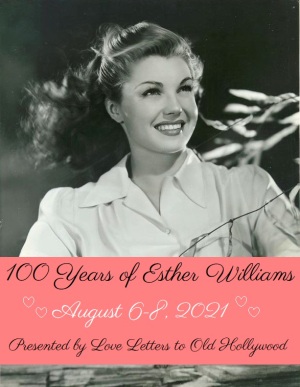 One of the fun things about Esther Williams’ movies is seeing all the ways MGM devised to get her into the water, and so far I think my favorite is the 1949 film, Neptune’s Daughter. It’s not only a fun movie, but it’s the point in Esther’s career in which she started using her unique public persona to influence the swimming world beyond the aquacade scene.

And for those of you who maybe found this review because of “Baby, It’s Cold Outside,” let me say this: Ricardo Montalban sings it to Esther Williams, but Betty Grable also sings it to Red Skelton. Yeah, it’s a little racy, but there’s equal opportunity randiness going on here and none of it is serious. So there’s that.

Anywhoo, the movie opens at a swimming pool, natch, where Eve Barrett (Esther Williams) has just won a race. Joe Backett (Keenan Wynn) has been after her to start a swimsuit company with him because he thinks she’d be perfect for it. Eve is a hard sell, though, because she wants to keep her amateur status, but Joe eventually wears her down and she finally says yes.

Joe’s instincts were correct, because the swimsuit company takes off like a shot, and their latest project is a big water show at the local country club. However, there is a snag: The South American Polo Team will also be playing there the same weekend.

Eve’s man-crazy sister, Betty (Betty Garrett) gets stars in her eyes and hightails it down to the club, where she asks stableman Pancho (Mel Blanc) how to find the captain of the team. Pancho directs her to the masseuse office, where Jack Spratt (Red Skelton) is giving José O’Rourke (Ricardo Montalban) a rubdown. Only by the time Betty gets there, José is already gone and Jack is by himself.

After knocking Jack out cold with the door, the mistaken identity arc that’s so common to comedies and musicals ensues. Betty thinks Jack is José and instead of enlightening her, Jack puts on a really bad Argentinian accent and uses a Spanish language record to fill in the blanks, but Betty is too starstruck to notice. Jack and Betty are both so inexperienced with the opposite sex that they’re too flustered to tell each other the truth, but it doesn’t matter because they really like each other and think this love stuff is unbelievably cool. 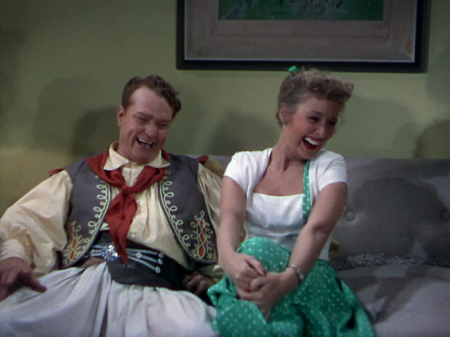 Meanwhile, the real José pays Eve a visit, but Eve gives him the cold shoulder because she thinks he’s taking advantage of Betty. In spite of herself, though, Eve secretly falls in love with José. She might declare herself to be all about her career, but her swimsuits suddenly resemble polo outfits.

Esther and company had a great time making Neptune’s Daughter. In 1949, Esther was really hitting her stride as an actress, her swimming scenes were getting fancier, and the music is top-notch. Ricardo Montalban is, of course, his usual charming self, and Betty Garrett and Red Skelton are a good comic foil. Mel Blanc is hilarious. The movie’s only slight obstacle came at the end of shooting, when Esther, who was pregnant at the time, had to go on bed rest. 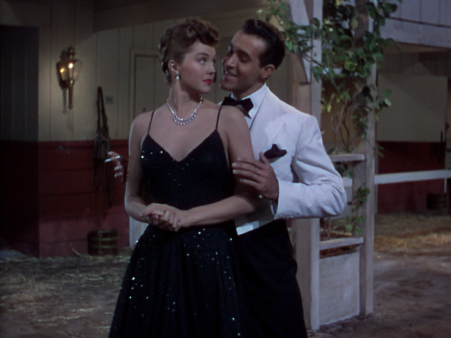 Other than that, everyone knew what they were doing and enjoyed themselves. The Esther Williams formula was well-established by the time Neptune’s Daughter released. Esther had to swim, with or without additional bathing beauties. There had to be stunts. There had to be hijinks of some kind. There had to be at least one specialty number. Xavier Cugat was a given, although not an unwelcome one. And it all had to end with Esther smiling prettily, whether at her leading man or at the camera.

On the other hand, the plot of the movie is pretty thin. And the constant mistaken identity thing gets a little frustrating sometimes, especially when Betty is in the next room and it would be easy to unsnag all the confusion by having her show herself, but suspense or something. Musicals always resolve quickly, though, and this one does too. 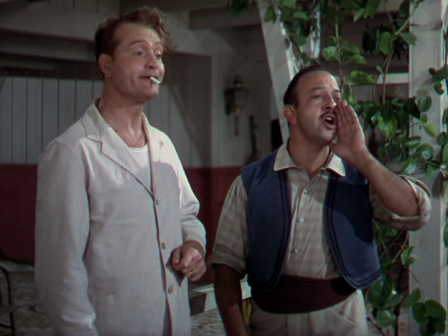 What makes Neptune’s Daughter a natural one for Esther Williams is that, first of all, it starts out with Esther’s character swimming in a race. Esther had qualified for the 1940 Olympic team before the Games got cancelled, which was a huge disappointment for her, and she turned her attention to other endeavors. So yeah, the lady was fast. Really fast. She probably held back a little bit in the movie to give her fellow swimmers a fighting chance, but it’s still fun to see her return to her roots.

Another cool bit is Esther’s character designing swimsuits. Because of the demands of her movies, she was able to help pioneer blended latex fabrics that clung to the body, didn’t need zippers, and didn’t get heavy in the water. Esther knew the limitations of swimwear better than anyone; during the filming of This Time For Keeps, a plaid flannel suit got so waterlogged she had to unzip it and let it sink to the bottom of the pool.

By 1949, Esther had taken charge of her wardrobe, and not only sat in on design meetings to make sure she didn’t get another lemon, but Neptune’s Daughter has product placement without having product placement. Cole of California asked Esther to promote a line of suits named for her, and in a daring move, Esther made the decision to do so on her own. She would get five percent of the profits for each suit sold, which was unheard of at that time.

During the studio era, stars didn’t promote products unless their employers gave the green-light, and these ads always listed their name, the name of their studio, and their current movie. Stars had very little involvement with the products they promoted, if they even knew about them, and they certainly didn’t get any money for these endorsements.

Early Cole ads featuring Esther had no such qualifiers, but she had enough clout as a star that there was really nothing MGM could say to her beyond a few odd grumbles, especially once they found out Cole would supply suits for free. Cole furnished suits for the next two Esther Williams movies after that, making Esther a healthy fortune.

Esther’s influence went beyond wearing the suits in her movies. She was able to persuade the Secretary of the Navy, Dan Kimball to commission Cole to make suits for the WAVES, who were wearing heavy, gray, knitted cotton shifts at the time. It wasn’t much of a sell job, either, because Kimball was repulsed when Esther modeled the regulation suit for him. The move not only benefited Navy women, but it meant Esther wouldn’t have to wear the ugly gray monstrosity in Skirts Ahoy! 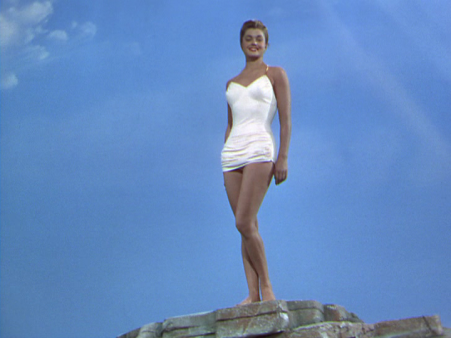 Heck, women (and men) everywhere can thank Esther Williams for her innovations. We not only get a fun movie in Neptune’s Daughter, but anything that builds confidence, and in this case it’s swimwear, is a freeing, hopeful thing.

For more of the wonderful Esther, please see Michaela at Love Letters To Old Hollywood. Thanks for hosting this, Michaela–it’s nice to have a visit with Miss Esther! Thanks for reading, all, and I hope to see you on Thursday for a visit to Poverty Row. Only it’s not just Poverty Row, but Living-In-A-Cardboard-Box Row. Anyway, have a good one…

Neptune’s Daughter is available on DVD from Amazon.