We’re back on Amazon Prime, guys. I hate to look like a shill, my Affiliate stuff notwithstanding, but The Map of Tiny Perfect Things has been intriguing me for a while, and now the time has come to answer that call. Based on a 2016 short story by Lev Grossman, who also wrote the screenplay, it’s a sweet time loop romance that is, for some reason, marketed toward young adults. Since it’s been out for a several months, there will be a few spoilers.

The opening of this film is so precisely rhythmic it’s like a dance. Mark (Kyle Allen) is woken up by his mom honking the horn from her Suburban. He can tell his dad the answers to a crossword puzzle before anyone asks. He knows when the toast is going to pop out of the toaster. Mark flits all over the kitchen juggling the toast and a juice box, lifting his sister’s fallen coffee cup with his foot as if he’s going to make a field goal with it. 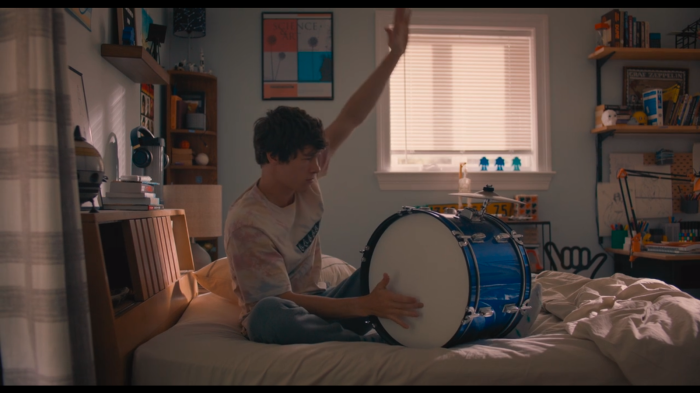 Mark’s confidence extends beyond his house. He knows his city’s main street so well he can swipe a cup of coffee off the roof of a guy’s car, take a swig, and drop the cup into the garbage truck passing the opposite way. Every morning he gives the same cute girl directions on his way to school, and later on he tries to save her from falling in the city pool.

As long as Mark sticks to his routine, his day goes well or at least predictably. If things turn out right, Mark walks the girl home. If things don’t go right, she falls in the pool and he walks off shaking his head. Every night Mark winds up by sitting on his roof looking at the stars and watching his watch tick over to midnight. Then everything hits the rewind button and he wakes up in his bed again. 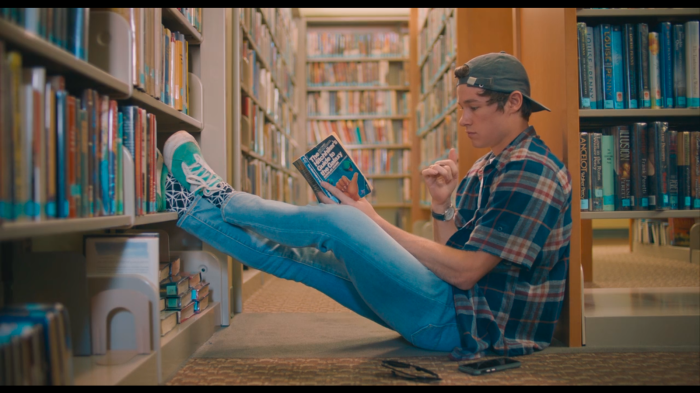 Mark is no dummy. He knows something is off about his life. Every day he crawls in his friend, Henry’s (Jermaine Harris) window and asks him what he would do if he had the same day loop over and over again. Henry gets it (he even mentions Groundhog Day) but he doesn’t seem to realize that Mark is serious.

Our hero seems to like being stuck because he’s master of all he surveys, but he also realizes he has no future. He skips summer school because it’s the same day over and over again. His dad, Dan (Josh Hamilton) seems to have quit his job to write a Civil War novel, which means his mom has to work long hours. And his sister, Emma (Cleo Fraser) thinks he’s a loser.

One day Mark is at the pool for the eleventy-millionth time when he notices a blonde he hasn’t seen before. He follows her out to her car, where he watches her leave her drink on the roof as she drives away. She also rear-ends the car across from her and knocks over a row of bikes. Mark notices she’s left behind a flyer for a missing dog, but when he calls the number it’s not hers.

As routine would have it, while Mark is at the local diner he sees the blonde again and tries following her. Long story short, Mark finds out her name is Margaret (Kathryn Newton) and she’s stuck in a time warp just like he is.

Despite the loop, Mark and Margaret don’t have to meet for the first time over and over again. Their cell phones magically save each others’ numbers. They call and make plans for the next day’s cycle without any problems. Mark’s in love, but Margaret is evasive, running off every night to meet some med student named Jared Cruz.

Being on the same hamster wheel gives Mark and Margaret time to talk. Margaret wants to work for NASA and Mark resents his dad for quitting his job because it means he never sees his mother. They don’t know why they’re stuck in one day, and they wonder if they’re supposed to use that time to become better people. Mostly they glom onto the no-consequences aspect of it, such as walking in traffic and trashing a model home. Mark makes a map of the all the perfect moments they see throughout the day, like a janitor jamming out on a piano when no one’s looking.

Eventually, they try to break out of the time loop by flying to Tokyo, but Margaret loses her nerve at the last minute and ditches Mark. He’s devastated, but from that point on something clicks in his brain, and he realizes everyone else is just as stuck as he is. Instead of bemoaning his mother working all hours, Mark makes a point of giving her a hug before she leaves. He realizes his sister hasn’t won a soccer match in ages so he goes to her game and cheers her on. He starts showing up at his algebra class and paying attention.

This movie doesn’t claim originality in the slightest. Oh, no. No illusion going on here. Groundhog Day gets more than a passing reference beyond the opening minutes. And the characters are very aware that they’re stuck because they need to figure out something about themselves and serve a purpose. The difference is that they spend a lot of time questioning why they’re stuck in the first place and what caused it. Maybe it has to do with science. Maybe it’s magic. They don’t know. The performances in the film are subtly effective. They’re not cute-cutesy, despite its being marketed to young adults. There are no contrived situations like the makeout scene in Twilight or looks and posing standing in for character development. Meme culture gets some good-natured skewering, thank goodness. And there’s very little spoon-feeding going on–some actual thinking is required to get the story.

One big difference between this film and other time loop movies is how much lateral movement these characters are allowed to have. They might be repeating the same day over and over, but they vary what they wear and what they do, because they know that no matter what, they will end up back in the same place as soon as the clock strikes midnight. At least in Mark’s case, his character shows progression by becoming more disciplined.

Meanwhile, Margaret is more nihilistic. She’d rather watch a falcon grab a fish out of a lake or smash something than milk her existence for all it’s worth. When we first see her in the movie she’s wearing a bedraggled Levi’s sweatshirt and a ratty trucker hat and she doesn’t care. Mark scares her because he’s able to find joy in manipulating their shared experiences. What he doesn’t know is Margaret has her own reasons for not wanting to move on, but she’s not ready to own up to them yet.

My only problem with this movie is the titular object is very minimally presented. Margaret looks the map over and smiles at it in one scene, but it’s not part of the film enough to mean much. It would have been cool if it was more of a motif throughout the film. Who knows, the characters could have used it to inform how they see life if and when they finally get off their hamster wheel.

The Map of Tiny Perfect Things might be predictable, but it has a good flow to it and a lot of nice moments. It really knows its characters, and the romance is believable with just a bit of bite. I came out of it smiling and feeling fine.

A new Reading Rarity is on the way Tuesday. As always, thanks for reading, everyone…

The Map of Tiny Perfect Things is free to stream for Prime customers. A Kindle edition of the original story is available here.