One of the interesting things about Sir Christopher Lee is that he never turned his nose up at a good part whether it was large or small, and over the course of his career he amassed quite a selection of bit roles in various films and TV shows. There wasn’t a lot of fanfare, so seeing Lee was always a pleasant surprise.

With that in mind, I thought I’d compile a (very) short list of some of those surprises, and they’re not in chronological order for once. Anyway, here we go…

Gen-Xers will remember the irreverent craziness that was Faerie Tale Theatre. I liked their send-ups of traditional fairy tales best, but they had their share of obscure episodes, too, such as “The Boy Who Left Home To Find Out About the Shivers,” originally broadcast on September 17, 1984. Lee plays sorcerer King Vlad, the son of Vlad the Impaler who lives in a haunted castle. There are a few twists, of course, one of which is Frank Zappa playing a hunchback.

In this version of the Dumas novel, Lee is Roquefort, Cardinal Richelieu’s right-hand stooge and all-around sleazeoid. Among the highlights, there’s a swordfight between Lee and a young Michael York as D’Artagnan, on a frozen river, no less (See a clip here). The inevitable happens of course. The film was directed by Richard Lester of A Hard Day’s Night fame and features a passel of durable actors.

In this Henri de Toulouse-Lautrec biopic, Mr. Lee makes an uncredited cameo as impressionist Georges Seurat. There’s really not much to the part except for Seurat inviting a grumpy Henri to the Louvre and Henri calling it a wasteland (Oh, Henri), but it’s still Christopher Lee.

Mr. Lee makes a notorious appearance as the mysterious and remarkably spry turncoat, Count Dooku. Initially he seems to be working against the increasingly degenerate Republic, but since he exclusively fights Jedis his real allegiance is obvious. In the end, Dooku is a scapegoat who only exists long enough in Revenge of the Sith to have his cranium separated from his body by an angsty, confused Anakin Skywalker. 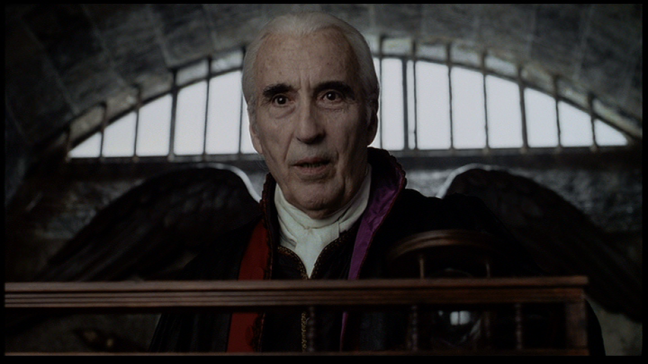 As the Burgomaster Lee gets to tower over Johnny Depp’s Ichabod Crane and order him to Sleepy Hollow to investigate the mysterious happenings. He’s onscreen for less than five minutes, but it’s significant because not only is Lee’s character Ichabod’s catalyst for the rest of the film, but it was the first of five films Lee made with Tim Burton.

Charlie and the Chocolate Factory (2005)

Charlie again teamed Lee with Johnny Depp, only this time Lee plays Dr. Wonka, stern dentist and loather of sweets. Depp is again cast out, but in this case it’s self-inflicted; his young self tries a piece of candy and his world changes forever. In a supreme bit of weirdness, Willy tries to go back home after he finds success, only to learn that his house and his dad are gone, plucked, as it were, out of their dreary, colorless neighborhood. Their characters meeting later provides an odd closure to an odd subplot for Willy Wonka, a man who’s supposedly looking towards the end of his life.

If anyone hasn’t seen Hugo, I highly recommend it because it’s not only a beautiful story, but it pays tribute to Georges Méliès, a pioneering filmmaker and entertainer who got a raw deal. I’m going to review this one more fully someday, but Mr. Lee is our guest of honor, so naturally he’s getting all the attention right now. Here he plays Monsieur Labisse, a serious but not unkind librarian who helps point Isabelle and Hugo in the right direction when they come looking for information about early movies. Lee was good friends with director Martin Scorsese, and they had a grand time making Hugo.

I’ve saved my personal favorite for last because I think it’s the best film adaptation of Verne’s novel. This miniseries has wall-to-wall stars and character actors and is highly entertaining. Pierce Brosnan, Eric Idle, Julia Nickson, Roddy McDowell, Simon Ward, Patrick McGee…the list goes on and on. Lee plays Stuart, one of Phileas Fogg’s whist buddies, who not only spearheads Fogg’s transworld journey, but then bets against him. A true Englishman doesn’t back down from a wager, and when the challenge is presented in a basso profundo like Christopher Lee’s, it’s just the cherry on top.

Christopher Lee’s career was diverse to say the least. It didn’t matter if a movie or show was good, not so good, or downright atrocious, he was always a welcome sight.

Sir Christopher Lee was my friend. I think of him every day, and I always will…And to just be with him, just listening to his stories, in that beautiful baritone voice, stories about his time in the war, his time working during the heyday of Hammer, on all those wonderful pictures that are now considered to be classics, on eight decades in movies…

At a certain point they realized what a treasure they had, and they made him Sir Christopher. And that’s as it should be. He was a great actor, a wonderful friend, a REAL professional, and I’m really going to miss him.

For more of the legendary Christopher Lee, please feel free to visit Barry at Cinema Catharsis and Gill at Realweegiemidget Reviews. Thanks for hosting this, Gill and Barry–it was a pleasure as always. Thanks for reading, all, and hope to see you on Sunday for Debra’s American Experience On Film Blogathon…

Faerie Tale Theatre: The Boy Who Left Home To Find Out About the Shivers (DVD), The Three Musketeers (Blu-ray), Sleepy Hollow (DVD), Charlie and the Chocolate Factory (DVD), Corpse Bride (DVD), Hugo (DVD and Blu-ray), and Around the World in 80 Days (DVD) are available from Amazon.