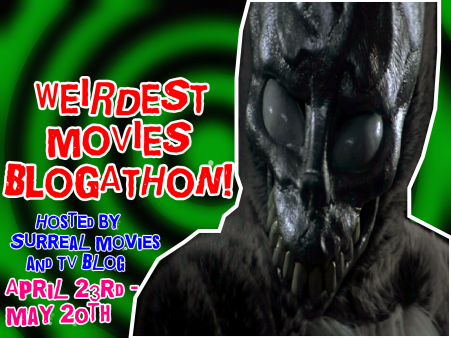 Virtually everyone has seen their share of weird movies. I know I have (Birdemic, anyone?). So when Ronyell asked us bloggers to name ten of our personal weirdest, it was a hard choice. There’s a lot of strange stuff out there. It’s kind of disturbing that I was able to compile this list in about ten minutes, and even then I had to make deep cuts.

What did I end up picking? Well, here it is, and if I may, dear readers, you might see a bit of a pattern. Without further ado…

Ah yes, the original, the kitschy, the Grand Pumbah of whirly, twirly shark movies, Sharknado is hilariously, horribly weird, but that’s not really talked about because we’re blinded by all the the badness. Sharks who travel by tornado and somehow bring seawater with them wherever they go? Yeah, that’s definitely weird.

And let’s not forget the ending. Not only do we see Ian Ziering wield a chainsaw with all the finesse of an angry master chef, but we see a recent victim somehow emerge alive from a shark’s innards, bloody but otherwise fine. Huh.

The cast reads like a nineties-era teen idol roll call, or at least the leads do: Ian Ziering as the hero, bar owner Fin(!), Tara Reid as Fin’s ex, April, and Jaason Simmons as Fin’s best friend, Baz. I’m guessing none of these people would have guessed in a million years that their later careers would take such an unexpected turn. 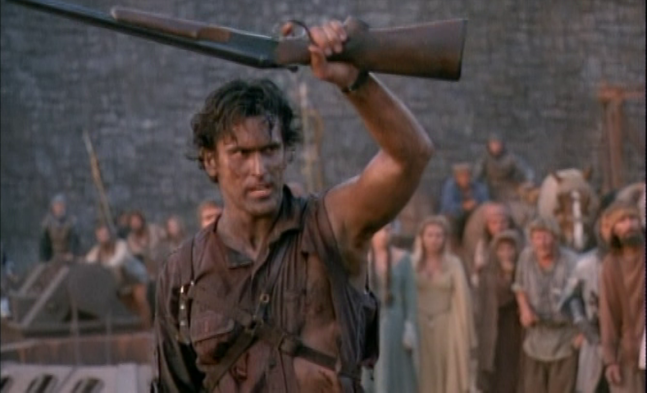 This is one of my husband’s favorite movies, but I’m happy to say I only watched it once back when he and I were dating. It’s like a really twisted take on A Connecticut Yankee At King Arthur’s Court, only the hero, department store clerk Ash (Bruce Campbell) has no intention of bringing modern conveniences to the masses. He mostly seems to want to scare them to death with his boomstick (rifle) and sleep with Sheila, the beautiful sister of one of Arthur’s knights who’s caught his eye.

Army of Darkness is weirdly, humorously dark all the way though. For one thing, Ash cuts off his hand with a chain saw after it goes bad. Who does that? Eeeeeewwww.

I know this film has a cult following, but I’m not in a hurry to revisit Army of Darkness in its entirety. Although, I will admit the boomstick scene is pretty funny.

From the people who brought us Sharknado, Transmorphers, and Titanic II, comes this little gem. It originally broadcast on Animal Planet, natch, and features Shannen Doherty, Christopher Lloyd, Jason Brooks, Ciara Hanna and Zach Ward in a to-the-death battle with…eels. Ravenous blood-sucking eels. Eels that can attack from even the tiniest amount of water. Like sewers. Or a pool. Or a toilet. Even asphalt if it’s wet enough. They’re like beta fish that way.

Say what anyone will about Asylum, they can be remarkably original. Or remarkably desperate.

My son and I howled over this movie because it’s hard to describe how weirdly bad it is, especially the continuity (He kept count of how many times Ciara Hanna’s slouchy sweater fell off her shoulder). And it’s all played sooooooo seriously. I may have to do a full review of the film at some point.

Believe it or not, we found Blood Lake on one of the rare occasions of flipping around our digital antenna channels, an increasingly fruitless activity these days. Lo and behold, there’s an entire channel devoted to Asylum movies. That’s it. All Asylum, all the time. I have a feeling we’ll be going back there fairly often.

Shine is sorta based on the true story of David Helfgott, an Australian concert pianist who suffered from mental illness while studying abroad in London. A lot of the movie is tied to Helfgott learning Rachmaninoff’s “Third Concerto,” which is commonly considered to be one of the hardest piano pieces ever written. I have mad respect for anyone who can play that puppy from memory. Or play it at all. Seriously (Hear the real David Helfgott play the piece here).

Anyway, one of my piano teachers absolutely loved this movie and didn’t hesitate to recommend it to my parents and I. It was so entertaining, she said. So one Friday night my parents and my friend, Angie and I saw it at a tiny art house theater in Nevada City.

Put it this way: We spent the entire time shifting uncomfortably and wondering what my teacher had found so entertaining. It must have been the mondo geek-out factor that got her. The movie’s David wanders around a good portion of the time in various states of undress. Sometimes it’s done for shock value, such as when David gets the mail in a blue sweater and nothing else, and other times it’s just there, but either way it’s impossible to ignore. There’s also a ton of weird imagery, like when we see David lurch toward the screen in his lowest mental state while tuneless piano chords play over the scene.

The Academy loved Shine, though, and awarded Geoffrey Rush a Best Actor Oscar, so there’s that. 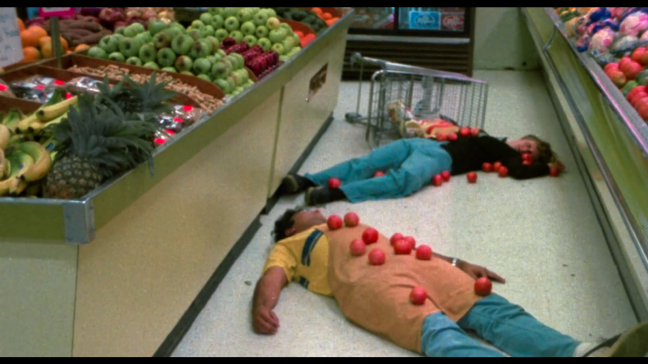 It doesn’t get much weirder than murderous tomatoes, and anyone who’s read my blog for a while probably saw this one coming, seeing as I reviewed it for the first So Bad It’s Good Blogathon.

The plot is a no-brainer: Genetically modified tomatoes come out of nowhere and kill everyone they see. In its usual show of competence, the government sends out experts to meet the challenge, like an Olympian who eats Steroidies for breakfast.

Simply put, Attack Of the Killer Tomatoes is so sidesplittingly bad that it’s awesome. Bad special effects, bad acting, bad makeup jobs, and really bad music, and locations that looked like they were picked on the spur of the moment. While the critics generally hated it, it somehow all works.

I first saw Dark City in a film class with my friend, Tim. He kinda knew what we were in for, but I didn’t, and I was pleasantly surprised as to how weirdly cool it is.

The film stars Rufus Sewell, Kiefer, Sutherland, Jennifer Connelly and William Hurt and is about John Murdoch, a man who finds himself wanted for murder. Only problem is, he can’t remember anything. It doesn’t help that his city shuffles itself around every night. A poor family might be eating dinner in their skid row apartment and all of a sudden they’ve become super rich people munching on fancy fare in their swanky dwelling. No one bats an eye or asks any questions.

Murdoch has questions, but they’ll have to wait because the cops are after him.

Like I said, this movie is cool. I’m thinking it deserves a full review, too.

Lately nineteen-fifties sci-fi has really been growing on me, and next to Forbidden Planet, one of my favorites is Them! The cast is not too shabby, sporting the likes of Edmund Gwenn, James Arness, Joan Weldon and Fess Parker.

It’s not hard to see where the weirdness comes in here; Earth being bombarded by giant ants can’t be anything but odd. The ants in this movie are obviously stop-motion puppets and their scenes are composite shots, but it’s fun. Like staring down an animatronic at Disneyland. I will definitely be revisiting this film someday in a proper review as well, but for now, all I’m going to do is recommend it highly to anyone who likes movies of any kind. It’s that much of a classic.

Yep, “Attack of…” movies tend to be weird, but that’s what makes them fun, right? I’ll lay odds us movie fans wouldn’t have it any other way.

This post is part of the Weirdest Movies Blogathon, which is hosted by Ronyell of Surreal Movies and TV Blogathon and runs through May 20th. Thanks for hosting, Ronyell–it was fun!

Another review is on the way tomorrow. Thanks for reading, all…

6 thoughts on “A Surfeit of Weirdness”