Are y’all ready for this?

Ah, 1960s camp meets Atomic Age scifi. It’s a universe full of cigar-shaped spacecraft and jerky stop-motion monsters, of bad special effects and wooden acting. Interstellar travel, something mankind had dreamed about for hundreds of years, was suddenly on the verge of attainability, and yet we weren’t quite there. We hadn’t made it to the moon in the early sixties and still had no real idea what that would look like, but it was fun speculating. One of those musings came from American International Pictures’ 1962 film, Journey To the Seventh Planet. Yeah. That seventh planet.

Okay, I know some of you are giggling already. In case anyone is wondering, the movie people pronounce it “Ur-AH-nus.”

The year is 2001. The entire planet is under the jurisdiction of the United Nations. No one cares about war anymore, just the almighty pursuit of science. Namely, us Earthlings want to find life on other planets, and we have bright, shiny spacecraft that can take us anywhere in a matter of days. Without light speed or hyperspace, might I add. For the purposes of our story, a certain group of explorers are out surveying the solar system, bound for Uranus. They’re strong of jaw, slick of hair, broad of shoulder, and seemingly American. Well, except for Karl (Peter Mönch), who sounds vaguely German.

Anyway, no sooner does the group arrive at Uranus than wavy light appears in their cabin and a disembodied male voice comes out of nowhere like the Great and Powerful Oz. It wants to mind-meld with our heroes. Isn’t that wonderful? The astronauts will bend to its will. The voice is in control. He wants control of Earth. He’s the Borg before Star Trek. Maybe,

The astronauts come around two hours later. Thinking they just blacked out, they fire their rockets and make a nice uneventful landing. Funny thing, though, as soon as they land, a pine forest springs up all around them. The oxygen levels are normal. It all looks very familiar. Like, really familiar. One crew member thinks he knows where a stream is a little farther on.

It doesn’t take the group long to figure out that something is very odd. None of the vegetation has roots. An apple tree pops up where there wasn’t an apple tree a few seconds before. After some more poking around, the men find a wall of some kind. They think it’s a forcefield, and it’s covered in vegetation. They’re able to poke a stick through it with no problems, but then Karl sticks his arm through and when he draws it back it’s frozen. 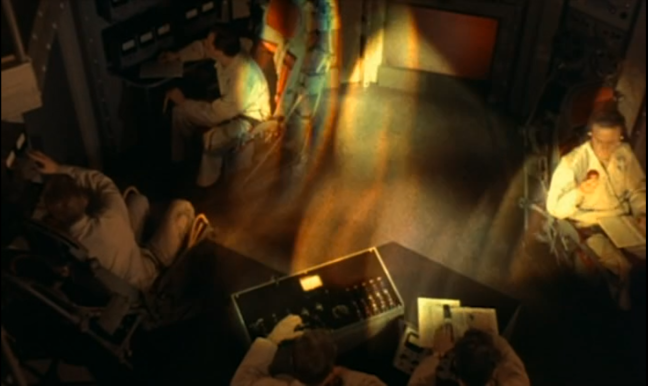 The astronauts go back to their ship to mull things over, and Captain Don Graham (John Agar) intones what could be possibly be one of the the most unfortunate lines in the entire scifi world: “What we’re seeing cannot possibly be Uranus.”

Anyone giggling again? I can’t blame you.

The surprises aren’t over. The captain tells about his memories of growing up on a farm in the Danish countryside and what he describes appears as he’s talking. Thinking it’s a mirage, he and the crew grab torches and guns so they can go investigate. It all looks very homey. There’s even a blacksmith shop. And gorgeous women named Ingrid (Ann Smyrner), Ursula (Mimi Heinrich), Ellen (Anna Birgit Garde), and Colleen (Bente Juul) in feathery negligees.

Still, our intrepid astronauts want to find out what’s behind the weird goings-on, not to mention the disembodied voice that continues pestering them, so they keep exploring and find a one-eyed brain in a cave. It sort of looks like raw tripe dyed bright orange. They also find an angry one-eyed rodent dinosaur and rescue each other from a white quicksand like the Snow Sand in The Princess Bride. However, neither the most tempting of visions or the most fearsome of monsters is going to deter our heroes from vanquishing the orange tripe brain who wants Earth to assimilate to its will.

Journey To the Seventh Planet was written by 3D and indie film pioneer Sidney Pink, whose previous credits included Bwana Devil and The Twonky with Arch Oboler. According to film historian Robert Skotak, Seventh Planet was supposed to be a sequel to Pink’s The Angry Red Planet. The story idea was so simple Pink and his co-writer Ib Melchior were able to present a written treatment that was all of eighty-three words long. It was one of two films Pink made in Denmark, as he couldn’t find work in Hollywood due to union problems. The actors in the film, regardless of whether they were Danish or American, spoke English, but the former had such thick accents that their lines had to be dubbed later.

Pink and Melchior found themselves with a microscopic budget of $74,000 and no way to draw any big names to their project. The most well-known cast member to American audiences, and this wasn’t saying much, was John Agar. He was previously best known as Shirley Temple’s first husband and was now making a sort of name for himself on the silver screen. Prior to Journey he had done mostly westerns, so sci fi was, pardon the pun, a departure.

The film’s badness comes from its being cobbled together. When there isn’t a whole lot of money in the coffers, one’s margins of error shrink and that means getting creative. Especially when the budget only allows a 2000-square foot set. In the case of Journey To the Seventh Planet, things got real creative, and the results are hilarious. Some of the goofs may or may not have been intentional. When the astronauts are supposedly in zero gravity an apple floats but books don’t. The dubbing in the film is really bad–at times it’s like a Danish Kung Fu movie. The one-eyed dinosaur looks partly furry and partly sca1ey because the filmmakers decided the original monster didn’t look right, but they didn’t have money for a whole new creature so they made over the one they had. There were supposed to be more monsters, including a giant serpent, but again, there was no money.

And there are some plot issues, namely, the characters are able to create weapons in the blacksmith shop even though it’s supposedly an illusion. Oh, and the conjured characters are somehow able to leave their artificial environment and interact tangibly with the astronauts.

Some of the cost-cutting worked in the film’s favor. To hide how makeshift everything looked, and to create the illusion of more space, cameraman Aage Wiltrup shot the movie from the soundstage rafters and purposely underlit and underfocused the scenes, giving everything a flatter, more otherworldly atmosphere. The end result was a film that didn’t resemble anything on the market at the time.

What’s surprising is that Planet didn’t fare too badly at the time of release, at least from the viewpoint of the critics, who recognized a good story underneath the tiny budget and slapped-together special effects, calling it “imaginative,” “innovative,” and “capable.” Seen today, it’s a gloriously shoddy piece of work that both deserves better than it got and got what it deserved.

For more badness, click here. Thanks for reading, all, and hope to see you tomorrow for Day Two…

Journey To the Seventh Planet is available on DVD and Blu-ray from Amazon.

~Any purchases made via Amazon Affiliate links found on this site help support Taking Up Room at no extra cost to you.~