Obviously, not every family is perfect. There are families that are together in name only, and sometimes not even that. Even seemingly perfect families may not be so perfect under the surface because the plain and simple fact is that we’re all human. Regardless of which scenario applies, life often forces us to deal with issues we’ve shoved under the rug for whatever reason, and the only thing we have control over is how we react to them. 2003’s Pieces of April is a surprising look at how one family comes to terms with itself in light of impending separation.

April Burns (Katie Holmes) lives in a very poor neighborhood on the Lower East Side of Manhattan with her boyfriend, Bobby (Derek Luke), and her family is coming from Pennsylvania for Thanksgiving. They’ve never gotten along, but April’s mother, Joy (Patricia Clarkson) is dying of breast cancer and doesn’t have much more time left.

There’s a meal to be cooked, of course, and April really doesn’t know what to do in the kitchen. She pushes giant celery sticks into the overcooked stuffing she shoves into the turkey and glops cranberry sauce out of the can without slicing it or making it look at least halfway decent. She chops onions with a paring knife. And she drops the turkey on the floor after picking it up by the wings. It’s doubtful she’s much for cleaning, seeing as her apartment is pretty filthy, so who knows what kinds of microbes lurk on the floor or anywhere else.

Gordon Ramsey would no doubt let fly a string of choice cuss words at all of this, especially after spying the icky brown color of April’s kitchen sink. However, even he wouldn’t be able to get around April’s oven not working. 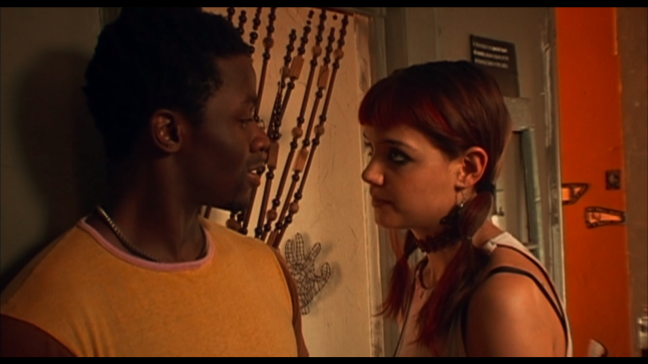 April leaves a note for Bobby, who’s out buying a suit, and starts knocking on doors looking for someone, anyone with a free oven, which, on Thanksgiving Day is a crapshoot at best or worst. She finally finds a nice couple downstairs, Evette (Lillias White) and Eugene (Isaiah Whitlock, Jr.), who, after hearing April’s story, not only let her use their oven for two hours, but give her some pointers on how to make cranberry sauce from scratch. Their Thanksgiving feast promises to be amazing, with buttered pecans and super secret family recipes for stuffing and sweet potatoes.

The next two hours of April and Bobby’s turkey’s existence look doubtful. After knocking on what feels like every door in the building, April thinks she’s found someone, but his apartment is full of cats. A lady promises her oven, but when April shows up with the turkey, she tells April she’s vegan and doesn’t want her oven to have the memory of any formerly living thing inside of it.

Finally, an old lady tells April that a guy named Wayne (Sean Hayes) on the fifth floor has a new stove. He’s amenable to April borrowing his oven, but locks April out because she doesn’t check on the turkey the second he wants her to. April responds by not only rushing the guy, but stealing his toupee and dropping it down the stairs. She finally finds a nice Chinese family who let her use their oven, and they listen with avid attention to her explanation of Thanksgiving.

Meanwhile, April’s family is on their way, and they’re not in a terrible hurry to get to New York. They make a lot of stops, including Krispy Kreme because they know April’s cooking. They take any old excuse to delay the inevitable. After they hit a squirrel, for instance, they give it a proper burial in the woods. Joy keeps getting nauseous and has to stop at service stations to throw up. It’s hard to tell if it’s the cancer or nerves.

April’s brother, Timmy (John Gallagher, Jr.) rolls his mom a joint and pulls out his portfolio for Joy and Grandma (Alice Drummond) to look through. April’s sister, Beth (Alison Pill) keeps saying they should all turn back, but Jim (Oliver Platt), April’s dad, tries to distract everyone by having them tell their favorite memories of April. Grandma, who keeps forgetting names and faces, is along for the ride.

Pieces of April is a very honest movie. It doesn’t slick up anything. I don’t think any interiors were filmed on soundstages; it really seems that all shooting was done in April’s actual apartment building or inside the Burns family station wagon. That’s why shots tend to be right on the proceedings. We have to peer into the stuffing and the giblet gravy pans because the kitchen is so tiny. There’s even a scene in a diner where characters are filmed through a railing. It keeps things real–a lot of older places in New York City are narrow and cramped. And possibly grimy. With steep staircases. And there might be cockroaches, which was the only thing the movie didn’t show.

I like it because it captures a Manhattan that doesn’t really exist anymore. I was only there for four days in 1994 but I’ve never forgotten it, and movies like Pieces of April bring it all back. Since this film came out, April’s apartment building has been gentrified and units can sell for about a million dollars apiece (See an example here).

As far as the characters go, everything gets unpacked in the leadup to dinner. Those favorite memories of April? They don’t exist. Even Jim, who’s trying his hardest to keep everyone moving in the direction of Manhattan, can only come up with a little anecdote about when he came home and found April sleeping. All anyone can talk about is how Beth got an A in home ec and can sing opera, or how talented a photographer Timmy is. April was the one who smashed things and set the kitchen on fire. Joy gets so distraught that she almost loses her nerve and tries to hitch a ride home. 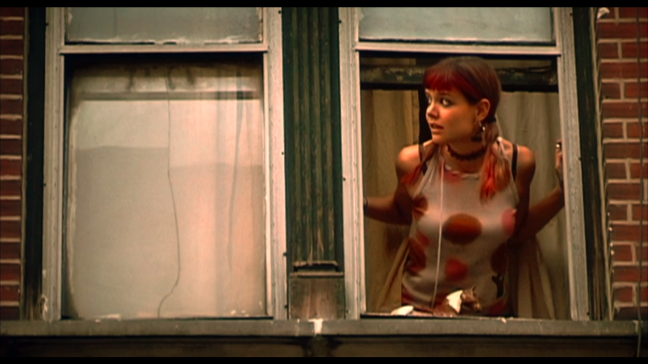 Adding to the tension is the family having to acknowledge Joy’s forthcoming death. Joy is tight-lipped about her inner struggle and does a lot of sitting alone in restrooms staring at the tiles. Jim is so preoccupied with his wife’s eventual going that he tests Joy’s breath when he spies her sleeping in the passenger seat. Even April, who has her own bad memories of her mother telling her she’s worthless, has to admit to herself that she and her mother deserve to make peace. She sort of believes it when Bobby tells her that she’s worthy of being loved by her family, but she has to hear it from them for everything to make sense. The movie’s big question is whether or not the Burns family will allow themselves to forget the past and forgive each other.

I was pleasantly surprised by Pieces of April. It’s definitely not a family film. It deals frankly with the effects of advanced breast cancer, namely in Joy’s unpredictability and her nausea. There are before and after pictures from her radical mastectomy, which may not be suitable for younger viewers. Besides that, there’s a discreet sex scene involving April and Bobby, although April is partially clothed and we see things around a doorway.

On the plus side, the film is very well-crafted and doesn’t waste time, clocking in at an hour and nineteen minutes. The camera bounces a lot as seems de rigueur for an indie film, but it shows character. When worlds open up, so does the camera. The performances by the actors are very raw and natural, especially Patricia Clarkson, who was nominated for an Oscar. Oliver Platt is staunchly dependable as Jim, Allison Pill finely plays Beth as a good girl who needs to get over herself, and John Gallagher’s Timmy is eccentric and socially awkward in a Wes Anderson kind of way. Alice Drummond brings her own brand of steel as Grandma, who may have a few tricks left to play.

April was a good transition role for Katie Holmes. At the time she was finishing up Dawson’s Creek, and the Burns black sheep was just enough of a departure from Joey Potter. I think the key is the passage of time. In 2003 it was hard to not see Joey Potter in April, but eighteen years later I found I could better appreciate Holmes’s performance for what it is. I almost expected her to play the part angrier as if she’s Avril Lavigne or something, but Holmes’s April is just plain over the world’s shenanigans. Plus I think Holmes wanted April to be likeable on a level and not merely eccentric. She has a nice chemistry with Derek Luke as Bobby, a decent guy who genuinely loves April.

I like that Pieces of April isn’t a typical holiday movie. It’s not a Hallmark card put on film, not that there’s anything wrong with that, but April feels that much more relatable. While it gets uncomfortable now and then because life, it also surprises and rewards us for making the effort to spend time with it.

More posts about home and family can be found here. Thanks for reading, all, and see you tomorrow with our fab Day Three entries…

Pieces of April is available from Amazon on DVD and is free to stream for Prime customers.

18 thoughts on “Warts and All”