2020 is one of those years when the entire world said, “What the heck?” We masked up, locked down, and tried to make sense of the craziness getting thrown at us week by week. It’s been ugly. It’s been enlightening. It’s been scary. It’s also been ludicrously comical. I don’t know about anyone else, but for me one of the clips that typifies the mishmash that was 2020 is this one: National Guard members dancing the Macarena with protesters and bystanders in Atlanta.

Countdown to curfew in Atlanta pic.twitter.com/vvITsNMSdB

What even is 2020? Yeah, it’s crazy, but it’s also life. With that in mind, I thought I’d revisit a book I used to like as a kid: Barbara Robinson’s The Best Christmas Pageant Ever. This 1972 novel is all about what happens when a family of holy terrors joins a local church.

And when I say holy terrors, I mean holy terrors. The Herdmans not only drink, smoke, steal, and cuss, but they always pass to the next grade because no teacher wants to deal with two of them at once. Their family pet is a tamed bobcat, and when one of the boys, Ralph, brings him to school for Show and Tell the demon feline goes on a tear around the classroom and destroys the goldfish tank. Another one, Imogene, sneaks into the nurse’s office, writes down the weight of every kid in school, and then uses her knowledge to blackmail her victims into bestowing various goods and services.

No one wants to get too close to the Herdmans and they like it that way. Anyway, they’ve got their own fish to fry–a lot of the town’s culture centers around the church, where everything is staid and rosy. The kids stand up in service and tell what they like about Sunday school while all the adults smile.

Every year the church puts on a Christmas pageant and every year the same kids play the same parts. Everything is so rote everyone can do it in their sleep.

Then disaster strikes. Mrs. Armstrong, who usually directs the pageant, falls down the stairs and breaks her leg, so the unnamed narrator’s mother is conscripted to direct the pageant. Mrs. Armstrong is full of suggestions and Mother is a little frazzled, but like everyone else she knows all the preparations by heart so she feigns the doorbell ringing to get Mrs. Armstrong off the phone.

Around this time, the Herdmans start coming to church. Why? Because they heard there was dessert. When they find out there’s a pageant, they join that too, taking all the big parts because most of the other kids are afraid of them. Especially Alice Wendleken who always plays Mary. Imogene Herdman threatens to stuff a pussywillow in Alice’s ear if she doesn’t give up the part. Where Imogene would find a pussywillow in the middle of winter is anyone’s guess, but it’s the threat that counts, right?

Since the Herdmans know absolutely nothing about the Christmas story they have to learn it from the ground up, and no one, including them, can predict how much it may change them.

One thing’s for sure: This year’s Christmas pageant is sure to be out of the ordinary, and it takes a family of hellions to wake up a jaded, complacent congregation to what Christmas is all about..

Barbara Robinson, an only child who grew up in Ohio, apparently wrote The Best Christmas Pageant Ever entirely from her own imagination. The Herdmans weren’t based on anyone specific, but the idea of bad kids infiltrating a relatively pure environment isn’t exactly new.

The novel is an expanded version of a story that originally appeared in McCall’s and was an instant hit. Then in 1983 a TV special starring Loretta Swit and Fairuza Balk came about. I remember watching it both on TV and in Sunday school, or possibly regular school, and it’s almost a point for point shooting of the book. It comes off well, although parts of it feel like guilding the lily. Loretta Swit states the title of the show twice and some parts feel a little rushed. Other than that, it’s pretty adorable (Watch the film here). 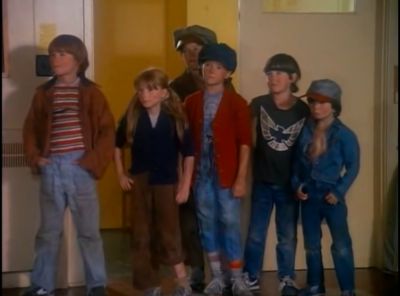 The story has found perpetual life as a stage play. It’s performed by community and church theater groups all over the United States and beyond, only in other countries Robinson’s story is known as The Worst Kids In the World. Despite the pandemic the show continues to be put on, such as a current production in Knoxville, Tennessee. As of this writing it’s slated for weekend performances up through December 20th, and yes, the performers are masked.

Among the many things that make Robinson’s story work so well is that readers can be their own conduits. We never find out the narrator’s name or what she looks like. In the film and stage iterations she’s called Beth Bradley, but other than that we don’t know anything about her. She can be whoever the reader wants her to be.

This is a good thing because it allows us to see Jesus’s birth through the Herdmans’ eyes. The Herdmans don’t just accept Jesus being laid in a manger; they think He deserved better. When they find out Herod wants to kill Jesus, they want to take out Herod. Instead of sedately announcing Jesus’s birth, Gladys, who plays the angel shouts, “Hey! Unto you a child is born!” and kicks the shepherds until they hightail it to Bethlehem. Everything the longtime Christians take as a matter of course the Herdmans are excited about in their own way. It just goes to show that the least likely people to be affected by Christmas may be the ones who surprise us the most.

Even though life is always nutty, 2020 or otherwise, we never know where we’ll find hope. Robinson’s story is a nice reminder of that and I highly recommend it to anyone who hasn’t experienced it, whether in novel, TV show, or stage play form.

Pure Entertainment Preservation Society’s Happy Holidays Blogathon is coming up tomorrow, and I’ll be posting my entry for it on Saturday. Thanks for reading, all, and hope to see you then…

4 thoughts on “The Great Shakeup”