Miss Moorehead is back…

One thing that can be said about Agnes Moorehead, and Bette Davis for that matter, is that in an industry that prizes youth above talent they managed to stay relevant. And they did it without seeming contrived or going under the knife, thank you very much. A flagship example of their later work is 1964’s Hush, Hush…Sweet Charlotte, a tight, gripping drama about a reclusive ex-Southern belle’s descent into seeming madness. It might seem like a different angle on Blanche DuBois if she didn’t go to New Orleans, or maybe a sequel to Whatever Happened To Baby Jane?, but it’s more than that. Our guest of honor has a small part as the smart and slovenly Velma, which, as we’ll soon see, brought her a distinction few studio-era actors could match.

Charlotte Hollis lives as a recluse at her childhood plantation home in Louisiana. Her one human companion is Velma (Agnes Moorehead), the housekeeper. It’s rumored that Charlotte murdered her married lover, John Mayhew (Bruce Dern) by cutting off his head and hand with a cleaver but no one has been able to prove it. The murderer also could have been her dad, colloquially known as Big Sam (Victor Buono). He famously hated John, but since Sam died the year after him, the secret died with him. Charlotte’s considered a legend by the locals and the children sing a Lizzie Borden-type song about her:

Chop off his hand and head.

To meet your love you ran, chop, chop.

Just why you ran to meet your love, chop, chop.

To chop off his head and hand.

Charlotte lives with a loaded rifle at her side. The powers that be are trying to build an interstate on the site of Charlotte’s house and she’s having none of it. One day when they knock down her gazebo Charlotte fires off a few rounds at them and then pushes a giant flower urn on the foreman (George Kennedy) from the second floor terrace. Shaken but unscathed, the man promises to bring in the sheriff.

One of the only people who comes to see Charlotte is Dr. Drew Bayliss (Joseph Cotten). He advises Charlotte to get ready to leave as there’s nothing she can do. The highway is going to be built whether she likes it or not. Charlotte’s got a backup plan, though–she’s asked her cousin, New York transplant Miriam (Olivia de Havilland) to come and help her.

Miriam shows up almost before she’s expected, but she has no intention of helping Charlotte save the plantation. She brings in some ladies to pack up Charlotte’s stuff and gives Velma her walking papers.

Well, she tries to give Velma her walking papers. Velma hates Miriam with a passion, calling her uppity and imitating her arch diction behind Miriam’s back. Velma is clearly jealous, because she sees Miriam as a threat to her game–Velma treats Charlotte like a sickly little sister and enables all her quirks, such as allowing her to scare the jeepers out of the construction crews and push around the extra help Miriam hired. Velma goes straight to a visiting mystery writer, Harry (Cecil Kellaway) after being fired, as she knows something’s not right but she can’t put her finger on it.

She’s not wrong. Charlotte thinks she hears John’s voice at night and him playing the song he wrote for her. She goes around in shorter dresses and pigtails as if trying to preserve her youth (Critic Bosley Crowther compared her to Hydra.). She’s also extremely triggered whenever someone touches her music box, saying it contains John’s severed hand. It’s all she has left, she says. As time goes on, Charlotte seems to get worse, thinking she sees John’s disembodied head fall out of a box. Miriam and Drew keep her sedated but it doesn’t stop certain truths from coming to light or seemingly random choices made.

Hush…Hush, Sweet Charlotte is a bait-and-switch. It leads the viewer along, letting them think a certain way about the plot and the characters just long enough to be jarring when some new development changes everything. It’s unrelenting in its intensity, with deep focus throughout, which gives every object and every look the possibility of importance. 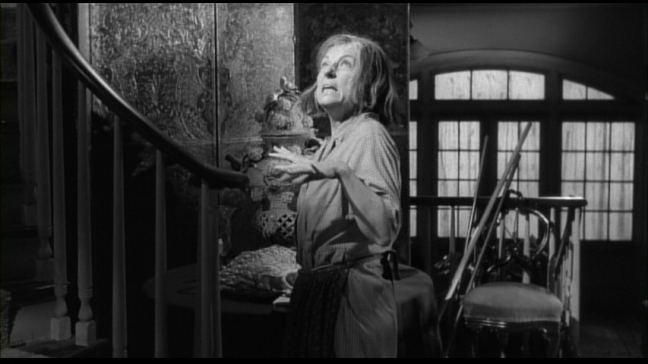 Then there’s the ending. Oh, the ending. Oh snap. It’s a blindside and I’m not going to give it away. Trust me. Anyone who hasn’t seen the film won’t want me to drop any hints.

That’s it. That’s the hint. Moving on…

In an attempt by director Robert Aldrich to recapture the inferno that was Whatever Happened to Baby Jane?, Charlotte originally starred Joan Crawford as Miriam. Bette Davis wasn’t gung-ho about reuniting with her archrival, and only agreed to the project after being granted the role of uncredited producer. Exterior shooting took place at the Houmas House and the Oak Valley Plantation starting in June of 1964.

Crawford didn’t last long. Historians seem divided on whether she was legitimately ill, not legitimately ill, or the insurance company simply demanded her replacement because bad investment, but either way, by August she was out and a new Miriam needed to be found. After unsuccessfully courting Katharine Hepburn, Vivien Leigh, Loretta Young, and and Barbara Stanwyck, Aldrich convinced Olivia de Havilland to take over, provided the Miriam role was beefed up.

Agnes Moorehead is only onscreen briefly relative to her costars, but she’s wonderfully distinctive as the unkempt, savvier-than-she-looks Velma. She’s like Ma Kettle on crack, only without the giant family and the jovially direct sense of humor. Her imitations of Miriam were pure ad-lib and add some much-needed comic relief to a heavy, serious script.

Once Moorehead’s part in the film wrapped, she threw a party for her costars. Everyone had gotten very chummy and remained friends for the rest of their lives. Joseph Cotten referred to Moorehead in his autobiography as “Dear Agnes” and Joan Crawford not only sent her a note telling her how much she enjoyed working in their few scenes together, but congratulated her when she was nominated for a Best Supporting Actress Oscar. 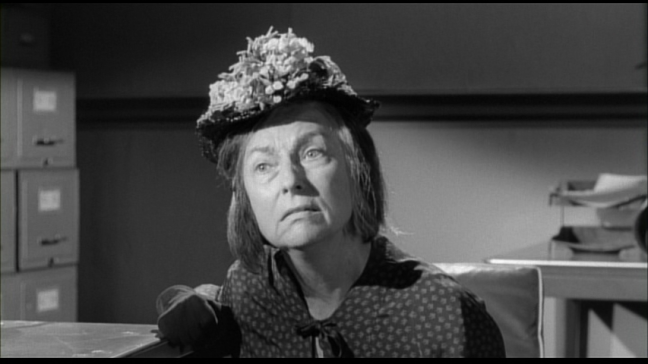 Where Moorehead made the most lasting impression, though, was on Bette Davis, who sent her Christmas cards and telegrams until Moorehead’s death in 1974. She was among the favored few, as Davis was notoriously hard to blow away, and this was a high compliment indeed.

For more of the wonderful Agnes, please see Gill at Realweegiemidget Reviews. Gill has graciously stepped in for Crystal, the original host of this blogathon, who is, sadly, currently in a coma due to a long-term problem with terrible migranes. She and her family are in our thoughts and prayers. Thanks for reading, all, and hope to see you Thursday for another review…

Hush…Hush, Sweet Charlotte is available on DVD from Amazon.

Cotten, Joseph. Vanity Will Get You Somewhere: An Autobiography. Bloomington, Indiana: iUniverse Publishing, 2000

Silver, Alain, with James Ursini. What Ever Happened To Robert Aldrich?: His Life and His Films. New York: Rowan & Littlefield, 1995.