Amy Sherman-Palladino once said that she peaked with Gilmore Girls. “It’s me under a bus after this.”

Well, you can’t keep a good writer down, and Sherman-Palladino is still at it. Her second artistic follow-up to Gilmore Girls was 2012’s Bunheads, a show that brought in mixed-to-favorable reviews and unfortunately only ran for a single season. The show has a lot of great points. It’s fun. Like everything else Sherman-Palladino has done, it features a tight storyline, pop culture references out the wazoo, and rapid-fire dialogue that would make Rosalind Russell proud. It also has a very few not-so-great points which we’ll get to in a bit. 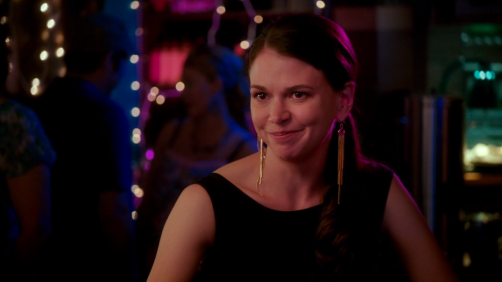 The show follows Michelle Simms (Sutton Foster), a ballerina-turned-Vegas-showgirl whose career is going nowhere fast. She marries a nice guy named Hubbell Flowers (Alan Ruck) on a whim and goes to live with him in the little seaside California town of Paradise. Michelle doesn’t love Hubbell, but she doesn’t love her life in Vegas, either.

Michelle is enchanted with Hubbell’s house, even if she feels awkward about her new marriage. Fanny (Kelly Bishop), Hubbell’s mom, is naturally suspicious of Michelle, but the two of them talk over shots and find they have quite a bit in common. Fanny, who used to solo with the Ballet Russe, has a loyal following, with the town looking to she and her students to provide the entertainment at various functions. 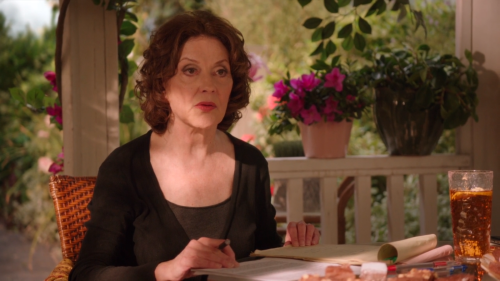 Hubbell is unexpectedly killed in a car accident, leaving his property, including Fanny’s studio, to Michelle. Fanny freaks, not only because her son is dead, but she’s afraid she’s going to have to uproot her entire life. Michelle is quick to reassure her that nothing’s going to really change. She leaves Fanny in the main house and moves into the guest quarters. The stove might be fake and it might have a little rodent problem, but Michelle relishes the privacy.

Bunheads’ story arc is a combination of Michelle’s fun-but-contentious relationship with Fanny and her big-sister dynamic with the four core dance students, all of whom have their own dramas going on the side. There’s Boo (Kaitlyn Jenkins), who’s constantly told she’s too “big” to be a dancer even though she’s one of the best in the class. Insecure Sasha (Julia Golde Telles) appears perfect but her facade is as brittle as a pair of old pointe shoes. Melanie (Emma Dumont) spends her days butting heads with her brother, Charlie (Zak Henri), who briefly dates Mel’s friend, Ginny (Bailey De Young). 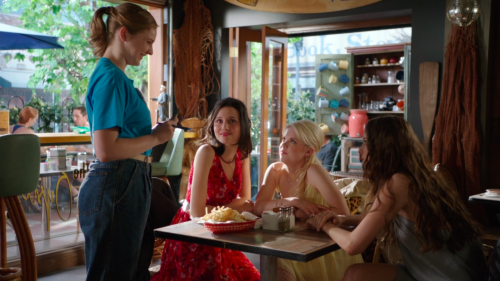 The show is strongest when someone’s dancing. Dance has always been part of the Sherman-Palladino universe in some way, although maybe not this strongly. Where Gilmore Girls dipped its toes in the water, Bunheads jumped in feet first (Toes pointed, of course). What I like is that the characters often carry their personal problems into the dressing room and the rehearsal hall. This aspect of Bunheads is all too real; I can speak from personal experience that life does not stop just because someone straps on some character shoes or lifts a microphone.

Sherman-Palladino knows this all too well, having trained as a dancer herself for many years and logging truckloads of performance hours. When Sherman-Palladino got a job writing for Roseanne she was auditioning for a role in Cats, and quickly realized she didn’t have to dance anymore.

That’s not to say she doesn’t still love it, though. Bunheads has plenty of insider stuff non-dancers might not pick up on, such as when Michelle gets giddy over how ugly a certain dancer’s feet are. This might seem odd on the surface, but to a dancer ugly feet are a sign of dedication.

It also peeks into the weird, weird world of open auditions. I’ve done my share of these, although not big-time ones, and they can be nerve-wracking. Directors and casting agents are often looking for a certain type of performer and they tend not to mince words. Plus it’s not unheard of for casting calls to be completely fake because producers want to pretend they didn’t already fill up their cast for whatever reason.

Another thing: The show makes the point that a lot of directors are sick of hearing songs from Les Miserables at auditions. Much as I like Les Miz I can’t blame them.

What’s great about Bunheads is that dance is not only the premise of the show, but it’s used to communicate character. Sasha dances to “Istanbul” when in a dark mood. Boo’s face shines when she gets to grooving because it’s what she loves, and her boyfriend, Carl (Casey J. Adler), uses it to show how much he loves her. Cozette (Jeanine Mason), Paradise’s newest queen bee, leaves our four core teenagers aghast when she joins Fanny’s dance class and leaps and twirls all over the furniture and costumes. These interludes feel completely natural and integrated and satisfying,

Besides dance there’s small town theater, which is near and dear to Sherman-Palladino’s heart. Paradise has plenty of characters, and they just might drop in for Fanny’s dance classes. A lot of them are very set in their ways and don’t take too kindly to changes in tradition, even if the changes are completely accidental, such as when Michelle accidentally maces the entire cast of The Nutcracker. The town blames her for it and she briefly skips out to perform in a two-bit magic show in Vegas.

Oh, and about Paradise: Literally every episode is a “Spot the Stars Hollow Alum” game. There’s a character named Father Luke, who’s never seen–people just talk to him on the phone. Gregg Henry, who played Mitchum Huntzberger on Gilmore Girls, is now Rico, the ponytailed, Birkenstock-wearing bar owner. Todd Lowe, formerly rocker Zach Van Gerbig, is now a one-eyed handyman named Davis. Alex Borstein, one of Sherman-Palladino’s favorite actors of all time, plays a hooker in the pilot episode and later on a mom named Sweetie Cramer. Even Sean Gunn, formerly known as Kirk, plays a fireman named Sebastian, and no, Sebastian isn’t a wannabe filmmaker. He does, however, have a goatee. 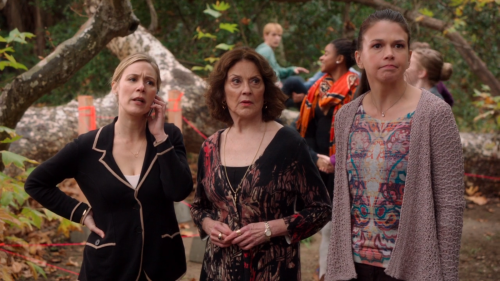 Well, not all of Stars Hollow’s former residents have left their previous personas behind. Biff Yeager, who played contractor Tom on Gilmore Girls, now plays contractor Bob. And Liza Weil, who infamously and excellently played Paris Gellar, is back as the equally scary Mindy Stone. She opens her mouth and people scramble.

Kelly Bishop as Fanny brings some of Emily Gilmore’s fastidiousness, but she’s also way more laid-back with a touch of boho. Emily abhorred jeans; Fanny loves them. She also loves clowns and candles, which are all over her house. And we get to see her dance along with her students, so how cool is that? 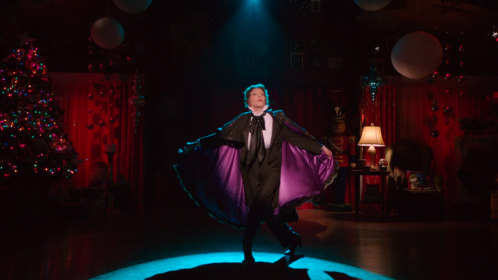 Bishop is ably matched by Sutton Foster, who is an incredible performer. I don’t know why we haven’t seen more of this woman because she’s the real deal. Her real-life brother, Hunter joins her for a few episodes, playing Michelle’s fickle sibling, Scotty, who forces Michelle to deal with her past whether she wants to or not.

The faces aren’t the only familiar things about Bunheads. The music was written by GG fixture Sam Phillips, who sticks to her trademark la-las except this time she doesn’t sing all of them herself. I almost expected Lorelai or Rory to pop up whenever I heard Phillips strumming. 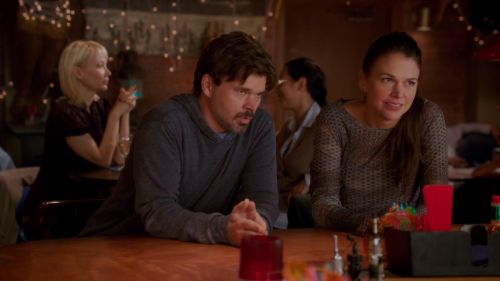 Bunheads‘ strengths are also its weaknesses. While it’s nice seeing former Gilmore cast members, most of them aren’t around long enough to let us get to know them and it starts feeling a little crowded after a while. I can kind of understand why they’re there; show people often like to work together as much as they can once they become friends, and maybe Sherman-Palladino wanted to get the gang back together after Warner Bros. stupidly booted her from Gilmore Girls.

Another weak spot is that there’s very little sense of place. About the only part of Paradise we see is a restaurant called The Oyster Bar, but other than that there’s almost nothing to distinguish the show’s environment. It’s not that the Bunheads crowd needed to be walking through Paradise all the time the way characters did on Gilmore Girls, but the show felt a wee bit closed in. It’s as if the cast members are trapped in their various settings and not allowed to leave.

I went into Bunheads thinking it was Sherman-Palladino’s rebound show, and it is, even though The Return of Jezebel James came first. Bunheads takes viewers out of Stars Hollow without taking them out of Stars Hollow, which is both comforting and predictable. The show certainly paved the way for The Marvelous Mrs. Maisel, which is about as far away from Gilmore Girls as “Wrecking Ball” is from Hannah Montana. I just wish  Bunheads had been given more of a chance to explore its own identity. It would have been interesting to see where a second season would have gone.

This isn’t the only time we’ll drop in on Fanny and Michelle. Who knows, maybe we’ll do Bunheads Fridays or something next year. Anyway, coming up in December: 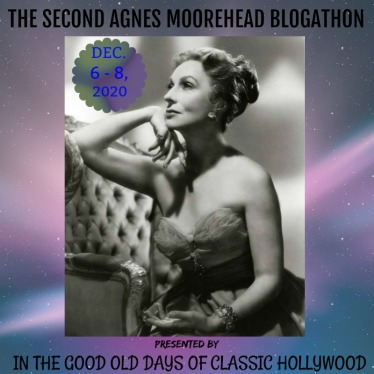 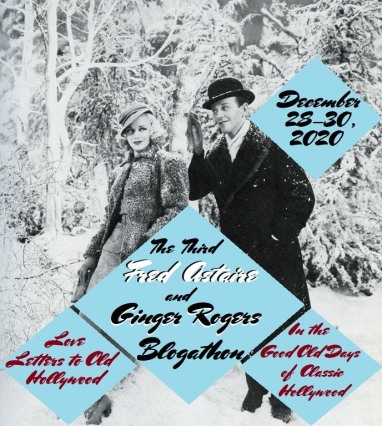 If anyone wants to join in these events, please see the following folks:

A new Page To Screen is coming up on Wednesday, plus some other stuff. It’s going to be a busy week. Thanks for reading, all…

Bunheads is available for digital purchase from Amazon.