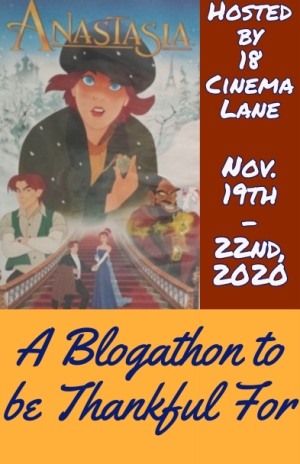 What are you thankful for?

OK, you all know one of my all-time favorite shows is Christy (read my earlier thoughts here). The show had a short life, but they did manage to make one feature-length holiday special, “The Sweetest Gift,” which originally aired on November 24, 1994. As it leads up to Thanksgiving and the usual feasting, it examines the themes of prejudice, friendship and identity.

It’s fall in Cutter Gap after a summer with late rains. The harvest has been ruined and the people are struggling to have enough money and food to last through the winter. Christy (Kellie Martin) decides to have her students put on a play adaptation of Longfellow’s The Courtship of Miles Standish, but she can’t help but see how hungry many of the kids are, especially the O’Teales.

Christy tamps down her own feelings of homesickness by keeping busy as much as possible, and the mission staff are at a loss as to how to assist the people of the Cove. The mountain people won’t take charity as a point of pride; they want to work for everything, so giving them money or food with no strings attatched won’t cut it.

That’s not to say the mission folks have nothing to do. David (Randall Bantikoff) decides to go around securing cabins and doing various repairs at different homesteads. Miss Alice (Tyne Daly) comes up with the idea of putting on a hunting contest, and whoever brings in the largest turkey will win her father’s saddle.

Miss Alice wants to make sure the contestants can find the best game, so she asks Dr. Neil MacNeill (Stewart Finlay-McLennan) to contact a hunter he knows, the reclusive Billy Long (Richard Tyson). Neil ribs Alice about bringing in a ringer so she can keep her dad’s saddle, but he contacts Billy anyway.

Billy Long is a rockstar of hunters. He can imitate any bird or animal, creep up quieter than a cat, and never misses a shot. He comes upon Miss Alice, Neil, David, and Uncle Bogg (Frank Hoyt Taylor) by making a turkey call so lifelike that Miss Alice draws her gun. One of Christy’s students, Creed Allan (Clay Jeter) becomes fast friends with Billy and learns hunting and fishing from him.

In the midst of all this, Christy’s dad, William (Richard Foxworth) shows up to visit. He’s just come from Knoxville, where he lost a difficult case, and Christy’s overjoyed to see him. William wants Christy to come home for the holidays, which Christy’s reluctant to do because of all that needs to be done in Cutter Gap.

Calamity strikes Cutter Gap when thieves rob Jeb Spencer (Bruce McKinnon) of a year’s income. Worse, William has a stroke and Christy’s mother, Julia (Dixie Carter) is sent for. She brings along the Huddleston family physician, Dr. Brandt (John Malloy), who foresees William will be an invalid for the rest of his life.

Christy doesn’t buy it. She knows Neil can help her dad, but Julia won’t budge because she sees Neil as a country doctor. She wants Christy to move back home and help with William, no ifs, ands, or buts.

Meanwhile, Creed doesn’t know how to take it when he finds out that Billy is part Cherokee–he thinks Native Americans are “dirty savages,” who do nothing but get drunk and steal food. Creed can’t reconcile his hero worship of Billy with his preconceived notions, and it’s a tossup whether he or Billy is hurt more. 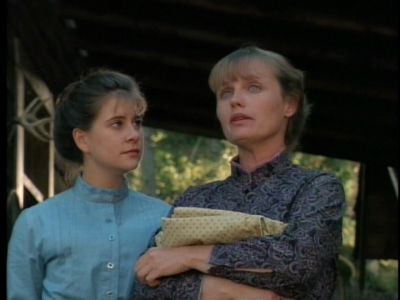 However, all is not lost. Fairlight Spencer has a dream that might solve the Cove’s problems of money and food…if she and Christy can figure out what it means. As for Creed, he just might figure some things out too.

“The Sweetest Gift” hits all the usual and welcome notes. It’s wonderfully filmed and acted with pretty, graceful music, including a hymn-sing with Judy Collins at the end. Its only very minor weak spot is that David has little to do except clean and wonder how he’s going to get a secondhand church bell to the mission. Then again, it’s a big story that focused mostly on Christy and Creed’s storylines. 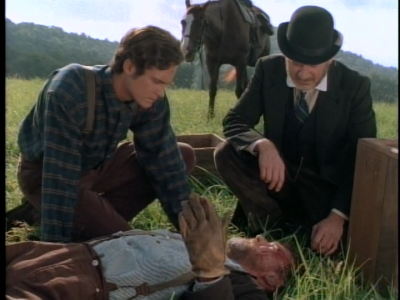 One of the reasons this episode dovetails into Thanksgiving so nicely is that the first Thanksgiving feast was evidence of prejudice overcome and people from very different walks of life coming together to thank God for His blessings.

There’s a lot to overcome in “The Sweetest Gift.” Creed has to decide what matters more–his preconceived notions about Native Americans or his friendship and respect for Billy. Julia has to stop seeing Christy as a little girl and recognize her daughter as an independent adult who has made good decisions for herself. Additionally, she has to reconsider her opinion of Neil as a doctor and be open to possible new treatments for William.

Christy has her own prejudice to overcome, as she thinks her mother won’t be able to handle the rough conditions at mountain cabins such as the O’Teales. To her shock, Julia doesn’t even flinch, and when she shakes Swannie O’Teal’s hand, she makes no mention of Swannie’s hands being messy from tanning leather. Christy is also suprised to see her mother tune into Swannie O’Teale’s reluctance to take charity and propose an alternative. It shows that building bridges isn’t always a one-way operation; oftentimes both parties either have to examine their motives and meet in the middle or change their positions altogether.

Christy always struck a nice balance between sentimentality and grit, with “The Sweetest Gift” being no exception. It’s not heavy-handed or mean-spirited. It ends where it should, it’s not contrived, and it feels like comfort food. Or in this case, like roast turkey and pumpkin pie. Christy is a beautiful show that ended way too soon. 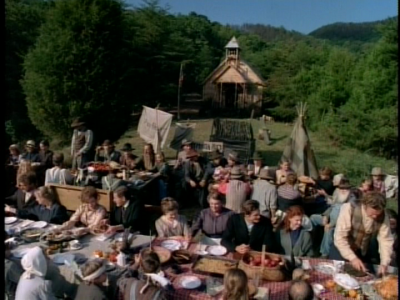 For more of A Blogathon To Be Thankful For, please see Sally at 18 Cinema Lane. Thanks for hosting, Sally–this was a great idea! Thanks for reading, all, and see you on Monday with another post…

Christy: The Complete Series is available on DVD from Amazon.

7 thoughts on “We Gather Together”