Everybody knows who Frankenstein’s monster is. Let’s be honest. He’s as notorious as Dracula with an almost equally formidable filmography. We’ll go into that another time with a proper “Page To Screen,” but today we’re only interested in the 1931 Universal classic and why it’s worth watching.

Frankenstein came out ten months after Dracula and Universal Studios was hitting its stride when it came to making sound movies. In fact, Universal hoped to ride that wave to more success with Bela Lugosi in Frankenstein, but Lugosi’s screen test was disastrous and he thought the part was beneath him anyway.

Instead, the role went to Boris Karloff who was forty-three at the time, and he didn’t have to do much to get it. Director James Whale saw him eating lunch in the Universal commissary, and over coffee he invited Karloff to play the Monster. Karloff, who had been a character actor of middling to little success up to that time, accepted. He and makeup wizard Jack Pierce would create a legend in more ways than one.

At the time of its release, Frankenstein terrified audiences enough that some left theaters, but they clearly didn’t stay away long. While the film cost about a quarter of a million dollars to make, it brought in a twelve million dollar profit for Universal and made Boris Karloff a star.

Frankenstein might not seem all that scary today because the Monster is so ubiquitous, but the movie has some tricks up its sleeve:

Go ahead and say it. You know you want to. 😉

This might be an odd thing to say about a horror movie, but Frankenstein looks gorgeous. The attention to detail is meticulous. The Frankenstein mansion is appropriately sumptuous with lots of carved wood and Bavarian detailing everywhere. The lab scenes feel so drippy and dank that it’s a wonder no one besides the Monster gets electrocuted when Henry throws the switch at the crucial moment.

Besides that, the movie has a German expressionist feel to it and many of the scenes that feature just the Monster are completely silent, yet so much comes across in a short amount of time. There’s a lot of motion to the camera work, with the only awkward scene being at the beginning when Victor comes to see a worried Elizabeth about Henry. For some reason the characters are shown greeting each other in choppy closeups.

OK, granted, the film isn’t much like the novel. Not at all, really. The novel is in first person from the major characters’ point of view, including the Monster’s. Plus Shelley leaves the Monster’s appearance ambiguous, although he is supposed to be repulsive.

However, the film effectively communicates the Monster’s lack of control. He had no say in being cobbled together by Dr. Frankenstein, and now that he’s alive he’s confused. The movie doesn’t really give the Monster a chance to get his bearings, though, because there are the usual torches and villages to mobilize.

Particularly poignant is the scene by the lake when the Monster plays with Little Maria (Marilyn Harris). In the space of about five minutes we learn how innocent the Monster is. He’s not a bad guy. He just doesn’t know what he’s doing. In a way the Monster is the victim in the story because he gets blamed for Little Maria drowning even though it’s a complete accident. He just wanted to see if she could float like the daisies she kept throwing in the water. 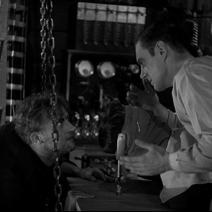 Colin Clive, of course, as Dr. Henry Frankenstein is unforgettable–he really put his all into the role and makes the audience feel for him. When his original euphoria at playing God wears off, Henry is racked with guilt and won’t rest until he makes things right. Sadly, Clive would die of pneumonia six years after Frankenstein, so there’s a certain melancholy in watching his performance. One wonders what this guy could have done in film and if he would have been as typecast as most of his co-stars.

Speaking of Clive’s co-stars, those who have seen the 1931 Dracula will spy some familiar faces here. Dwight Frye, who played doomed, spider-chomping Renfield is Fritz in Frankenstein, and while he’s almost unrecognizable the part is a benchmark. Bela Lugosi and Boris Karloff may have created the popular archetypes of Dracula and Frankenstein, but Frye created the classic sidekick with his lurching hunchback and the “Yes, master.” Every second banana in the horror genre has pointed to Frye’s turn in Frankenstein in some way.

Also familiar is Edward Van Sloan, who played Van Helsing in Dracula and Dr. Waldman in Frankenstein. Both parts are similar in that Van Sloan functions as the Fella Who Explains Everything, but Waldman is less of a warrior than Van Helsing. No brandishing of crucifixes and staring down the bad guys for Waldman; he merely serves to put Henry back on track.

Other memorable cast members are Mae Clark as Henry’s fiancé, Elizabeth, John Boles as faithful friend, Victor, and Frederick Kerr as Baron Frankenstein, the latter of whom seems to live to keep the liquor flowing.

I like Boris Karloff. He was a very classy gentleman, very elegant, and emotes remarkably despite being covered in makeup and prosthetics for his role as the Monster. It must have been taxing job, as the boots alone weighed thirty pounds. Karloff was forty-four at the time and sometimes would spend as much as twenty-five hours made up before he got to go home and relax. When he lopes along in the film he isn’t really acting.

Still, he had a great time as the Monster and would always see it as his favorite role, playing it twice more over the course of his career. He didn’t seem to mind being pigeonholed as a horror master all that much, either. According to his website, Karloff had this to say: “Well, I must admit the whole of my career has, shall I say, a familiar ring about it. They don’t change the pattern very much. But I don’t hanker for changes.”

There’s something about the early Universal chillers that doesn’t really get old, and Frankenstein is rightly one of the grandaddies of what we know as the horror genre and the Frankenstein archetype. It’s a fun movie both for seeing where all the common tropes came from and on its own merits.

More horror stuff is coming starting on Thursday, including Kristen’s Spooky Classic Blogathon. Thanks for reading, all, and have a good one…

Frankenstein is available on DVD and Blu-ray from Amazon.

Mank, Gregory W. Bela Lugosi and Boris Karloff: The Expanded Story of A Haunting Collaboration, With A Complete Filmography Of Their Films Together. Jefferson, North Carolina: McFarland & Company, 2009.