One thing that’s not often talked about when it comes to Audrey Hepburn’s career is how varied her filmography really wasn’t–she mostly played romantic leads or maybe women who were unconventional. There’s nothing wrong with that, but as they say, variety is the spice of life, and like many actors, Hepburn enjoyed playing against type whenever she could. As such, one of her favorite roles was Gabrielle Van der Mal in 1959’s The Nun’s Story.

First, a little disclaimer: If you’ve been around my blog for a while, you know I’m a Protestant. While I have Catholic friends, I don’t really know anyone who’s discerned or entered the religious life. Ergo, I may get some terms or procedures wrong, so if anyone reading this is Catholic and spots something incorrect, please let me know and I’ll fix it.

Gabrielle Van der Mal (Audrey Hepburn) enters a convent in her native city of Brussels because she wants to be a nurse in the Congo. She has a great aptitude for medicine, as her dad is Hubert van der Mal (Dean Jagger), a famous surgeon.

While he’s proud that she’s chosen to take this step, Dr. Van der Mal has reservations about his daughter becoming a nun. Gabi is strong-willed and does things in her own way, and the good doctor wonders how she’ll be able to restrict herself to the regimentation of convent life. Every step of the day is dictated by the ringing of the bells, and come hell or high water, the bells must be obeyed. Gabi’s very set on her next step, though, so off she goes to her new motherhouse. 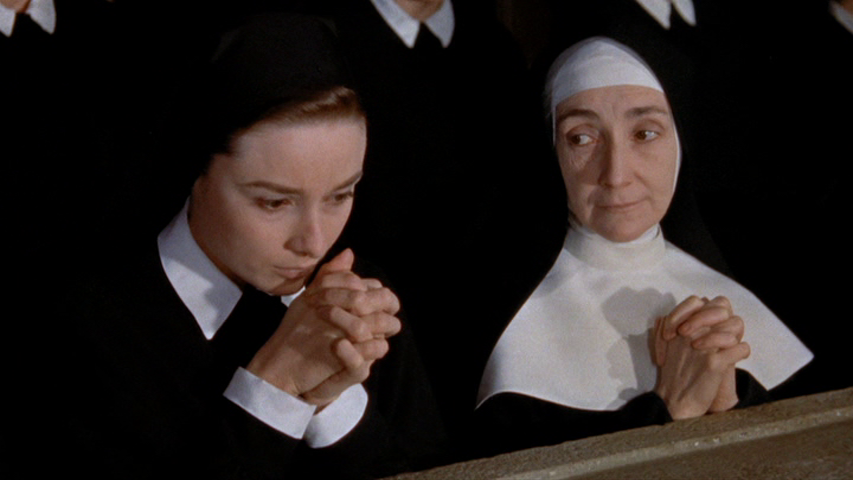 The convent follows a very strict order. The postulants learn to hide their hands when they’re not performing some task, to divest themselves of their former lives as much as possible, and they write their sins in a notebook every day. Self-determination after a point is mostly verboten. Even drinking a glass of water between meals without permission is grounds for penance.

Gabi perseveres, though, and after becoming a novice and then a temporary professed, she’s sent to the School of Tropical Medicine. Her religious name is, fittingly, Sister Luke. To her disappointment, though, she’s assigned to a sanitarium where she works with the most severe cases, including a violent schizophrenic nicknamed the Archangel (Colleen Dewhurst).

Eventually, though, Gabi’s ship does come in, and she heads off to the Congo. However, more disappointment awaits when she finds out she’ll be assisting in surgery at the European hospital. Her superior is Dr. Fortunati (Peter Finch) is a bachelor and an atheist, and the two of them develop a slightly contentious working relationship. Fortunati expects a lot from his nurses, and a lot from himself, and while Gabi is up to the challenge, she struggles inside.

The implication is that Gabi’s romantically drawn to Dr. Fortunati, but she also struggles with her own natural bent of being an excellent nurse. She makes innovations at the hospital that are the talk of the town, much to the embarrassment of the Mother Superior, who wasn’t told beforehand. Gabi stresses herself out so much that she contracts tuberculosis, and rather than lose a good nurse, Dr. Fortunati installs her in a treehouse where he tries an unconventional treatment involving, among other things, Belgian beer and prairie oysters.

While the break refreshes Gabi, she’s not off the hook. With the arrival of the Second World War, a personal tragedy forces her to decide whether she can keep serving in silence or join the fight against the Nazis.

Gabi’s whole career as a nun is a struggle. As her dad worried at the beginning, her will comes to the forefront every time. She has trouble keeping her hands still. She talks during the Grand Silence. She looks up at the Mother Superior when all the other postulants are lying face-down.

The thing is, though, Gabi doesn’t act out of malice. She’s sincere about wanting to be a good nun and tries her hardest to obey the rule, but self always gets in the way. As a perfectionist, Gabi won’t give less than her all, whether in nursing or religious life, but she fights a losing game by striving to be perfect. While it’s a good thing to do everything wholeheartedly, perfection belongs to God. Not that we have to be mediocre or look for excuses to sin, but there has to be balance.

The bells are a constant motif throughout the film, as is the idea of ceding one’s identity in the name of service. At the beginning of her time in religious life, Gabi looks at the other nuns and sees only faceless beings who live to serve God through their adherance to the order. When Gabi approaches a crucial moment in her struggle, she hears the bells and makes a decision. Which side of her will win out? That is the big question.

The Nun’s Story is based on a novel of the same name by American Kathryn Hulme, who worked at a refugee resettlement camp in Bavaria after the Second World War. There she met Belgian nurse and Underground operative Mary Louise Habets. The daughter of a prominent surgeon, Habets had been a nun for seventeen years, serving in the Congo, but left her order when she couldn’t match up being a nun with the hatred she felt for the Nazis.

Hulme and Habets became fast friends, returning to the United States together in 1951 and living in various places, with Habets working as a nurse. Hulme sponsored Habet’s coming to America, and Habets sponsored Hulme when she became a Catholic. In 1956, at Habets’ suggestion, Hulme wrote The Nun’s Story, following Habets’ experiences but with a few changes. It became a huge bestseller and was bought by Warner Bros.

Filming took place in Rome, Belgium, and what is now the Democratic Republic of the Congo. According to TCM, Warner Bros. tried and failed to have real nuns as extras in the film, so they hired dancers instead, because they could stand the long hours of, well, standing in uncomfortable costumes.

Audrey Hepburn threw herself into preparations for her role, learning Catholic prayers such as the rosary, and practiced wearing a habit. Biographer Alexander Walker noted that Hepburn even went to a hospital to watch nuns at their nursing work. Hepburn also met with Habets and Hulme, the former of whom would be her nurse when she later got injured on the set of The Unforgiven.

Once Hepburn got into character, she took on the preferences of a religious, even asking a crew member not to play jazz because it wasn’t suitable for nuns.

Well, Audrey wasn’t completely nun-like. She asked for a bidet and an air conditioner for her room in the Congo, and got customs to waive the pet quarantine so her dog, Famous, could go with her. And she smoked while wearing her habit, as did other actresses in the cast, which confused the African locals.

When the film wrapped, Warner Bros. higher-ups thought The Nun’s Story was too much like a documentary and delayed its release until June of 1959. However, vindication was at hand when the film became immensely popular and profitable, winning both critics and the public.

Nowadays, the film is a little bit dated in that the African men are called “boys” and the natives treated generally as children, which probably rankled people in 1959 as much as it would now. It also gets slightly intense in the asylum scenes of the psychotic patients, as well as in some scenes in the Congo that were filmed in leper colonies.

On the other hand, there’s a lot to appreciate in the movie. The Nun’s Story might be an unusual film for Audrey Hepburn, but it was certainly one of the most memorable. It’s beautifully filmed, quietly poignant, and easily appreciated by anyone, Catholic or Protestant.

Another review is coming up on Thursday, as well as the Rule Britannia Blogathon next Saturday, so I hope you’ll check back then. I’m looking forward to the movies I’ll be reviewing because I haven’t seen either one, and you all know how much fun it is to find new stuff. OK, thanks for reading, and have a good weekend, everyone…

The Nun’s Story is available on DVD from Amazon.

4 thoughts on “Into the Habit”