I heard somewhere that ninety-five percent of idea submissions in Hollywood get rejected. Who knows if it’s true anymore, but it’s a pretty widespread saying. Naturally, there’s nothing stopping hopeful filmmakers from going outside the mainstream, and this has resulted in some…er, very unique movies. Some good, others not so much. 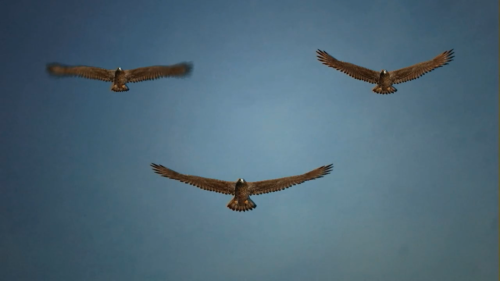 Written and directed by James Nguyen, this hideously delightful movie tries so hard to be The Birds while lamely blaming the character’s troubles on the proverbial global warming. And apparently Tippi Hedren has a cameo. Kinda.

The movie opens with a shot of some unnamed beach somewhere, and then we see a blue Mustang driving. It keeps driving. And driving. It takes a full minute and a half for the opening credits to appear, and they look like they’ve been typed on a MacPlus. As for the score, the same five notes play over and over in various registers. 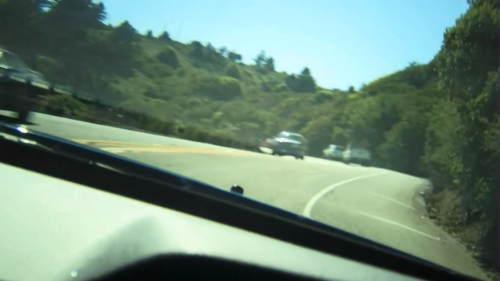 Three minutes and thirty-seven seconds into the movie, we see the welcome sign for Half Moon Bay. It doesn’t get any better from here, folks.

Rod (Alan Bagh) drives into downtown and stops at a diner for lunch, where he spies a beautiful blonde eating…something. We don’t know what. She gets up to leave, apparently without paying, and Rod takes off after her. Yeah, not at all creepy, but apparently Rod and this blonde, whose name is Nathalie (Whitney Moore), were in the same English class in high school. Funny how they seem to know each other so well, as neither one of them give their names at that first meeting. 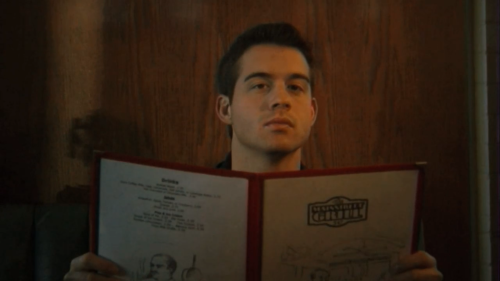 Our hero is a software engineer turned salesman, and the types of deals he can close on the phone are nothing short of stupendous. It’s not every day a guy like Rod can net a million dollar sale in five minutes. He and his buddies sit even prettier when their company makes a billion dollar contract and they’re suddenly swimming in stock options. Rod decides to take his newfound wealth and open a green tech firm specialising in solar panels.

Nathalie isn’t doing so badly herself. After an amateurish modeling shoot at a One Hour Photo(!) her agency calls to tell her that Victoria’s Secret wants her as their new cover model. Isn’t life grand? 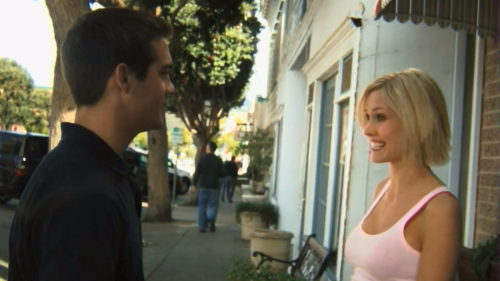 So yeah, Rod and Nathalie start dating. First it’s off to a Vietnamese restaurant and then there’s a romantic walk around San Francisco, where they stare dreamily at a magnolia tree on Lombard Street. A few parrots hover around the tree like giant hummingbirds, but no biggy because they’re all cute and stuff. Nothing weird at all.

Nathalie takes Rod to meet her mom, who talks at length about her career in the jewelry business. Rod and Nathalie go on a double date to the movies with Rod’s friend, Rick (Danny Webber) and Nathalie’s best friend, Mai (Mona Lisa Moon). They see An Inconvenient Truth, of course. Another day it’s off to the Pumpkin Festival and a walk along the beach, where Rod and Nathalie find a dead bird. 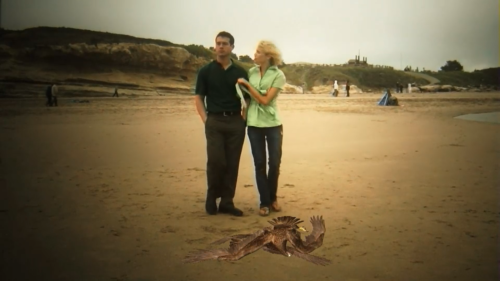 Yeah, still not weird. Does Birdemic seem like a horror movie? It’s not, really, but it gets there eventually. It just needs a forty-seven minute running start.

After a not-at-all-romantic night in a Motel 6, Rod and Nathalie wake up to find fearsome-ish eagles and vultures hovering outside. They make zooming noises like a feathery Luftwaffe while screeching like banshees. As soon as the birds see Rod they fly at the window. For some reason Nathalie and Rod decide using the bed to barricade themselves in the room is the best course of action. I did not know that birds could pick locks and jimmy hotel deadbolts, but hey, you do what you gotta do. 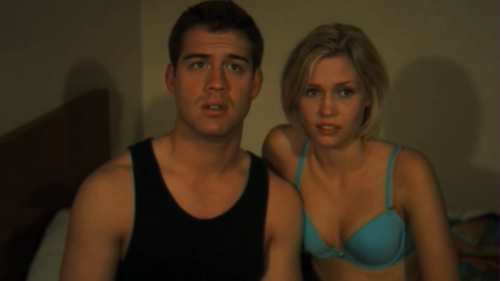 Eventually they do have to leave, and the rest of the movie is basically a jaunt around Half Moon Bay and its environs in an ancient Ford Aerostar. Rod and Nathalie try to save people by shooting at the birds, and despite occasionally hitting some of these creatures, most of the people they save get pecked and slashed to death anyway.

Oh, and did I mention the birds can poop firebombs? 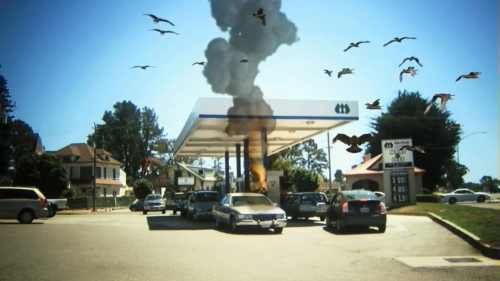 How bad is Birdemic? Very bad. Hilariously bad. It will make viewers flinch like they’ve never flinched before, probably because their sides hurt from laughing.

First of all, there’s the sound, which doesn’t match what’s happening, if it’s heard at all. In the first scene Rod sounds like he’s walking on eggshells instead of sidewalk when he goes into the diner. 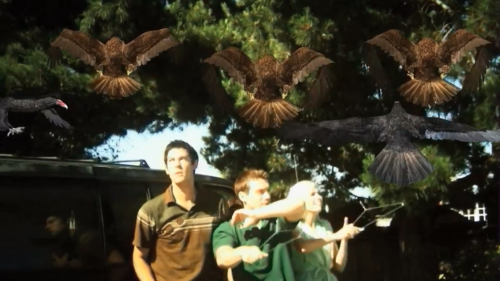 And continuity? Nope. When the film uses insert shots, the ambient noise will often go from a gentle hum to jarringly loud. The montages are equally painful, such as when Rod and Nathalie go to the pumpkin festival. Music playing over a scene will abruptly drop off so one of the characters can say something. ADR clearly wasn’t a thing anywhere in Birdemic, either.

Neither were settings, for that matter. In the double date scene when the group is supposedly coming out of the theater, there’s no theater in sight. It looks like the characters are exiting a grocery store.

What’s especially hilarious is the board meeting when Rod finds out he’s come into money. The whole room claps. Sort of. There’s an insert shot of people clapping. Then the camera pans over a few seats, there’s silence for a couple of seconds, and people start clapping, and then over a few more seats, and so on all around the table. So it’s a verrrrry long scene of people clapping on cue. I guess shooting the scene in one long take didn’t occur to anyone. Argh.

Then there’s the acting, which is so…lousy. The actors’ delivery is either too wooden or too perky and the dialogue is endlessly clunky. Variety chalked this up to James Nguyen’s mediocre command of the English language. One would think his cast would help him sand down the rough edges if that were the case, but no. 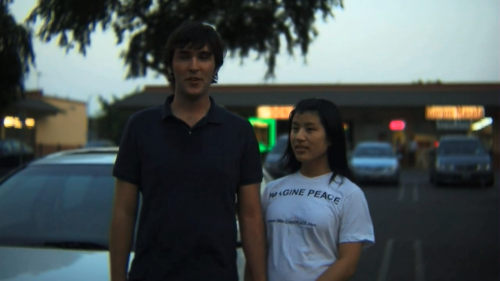 The dialogue is also in poor taste. Rick is a creep, making lewd gestures to Rod about how hot Natalie is, and to his credit Rod winces. The movie also has a little TMI problem, with characters talking way too casually about stuff that’s better left unsaid, such as when Mai and Rick tell Rod and Nathalie they’re leaving the double date to go roll in the hay. Only they don’t say it quite like that.

Yeah, speaking of romance or lack of, Rod and Nathalie have no chemistry; their relationship plays out like ticking boxes off a checklist. Holding hands? Check. Moon eyes? Check. Awkward hugs? Check. Romantic walks? Check. Obligatory near-sex scene where Rod doesn’t take off his belt? Check. 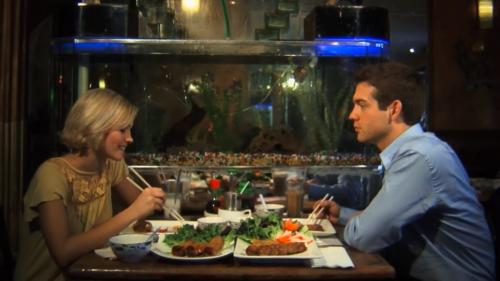 Plus there’s no logical timing in the conversations. During one of the parts when they’re supposed to be shooting the birds, Rod randomly asks his friend, Ramsey why he left the Marines. Ramsey says it’s because he got tired of killing people in Iraq. Really, Ramsey? Seeing as he doesn’t know how to handle a gun, it’s highly likely Ramsey didn’t even get near the Marine Corps, let alone Iraq.

Oh, and let’s not forget the shoddy special effects. Badly rendered matte lines abound. The birds look flat, they do nothing but hover, and they don’t react when people swat at them. However, clawmarks magically appear on people’s faces. And if the birds are supposed to be flying away, they don’t seem to get any smaller. 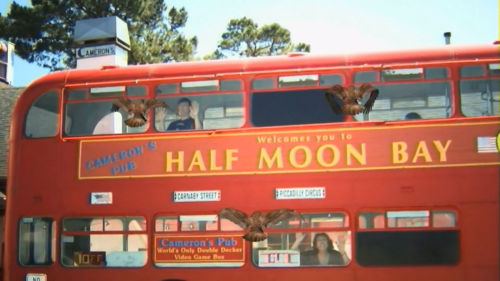 James Nguyen deserves a few kudos, because the film had a ten thousand dollar budget and Nguyen financed it himself. The critics were, of course, merciless, but amazingly enough, Birdemic became enough of a cult classic that Nguyen decided to make a sequel, Birdemic 2: The Resurrection. That time around he had more money and slightly better production values, but the movie flopped hard because he tried to be bad on purpose. He probably should have left well-enough alone, because we all know what they say about lightning striking twice, even poorly rendered CGI lightning.

Some movies have to be seen to be believed, and Birdemic is one of those. It will likely inspire a viewing of The Birds as a brain-cleanser. And maybe a look at the one CinemaSins video worth watching. 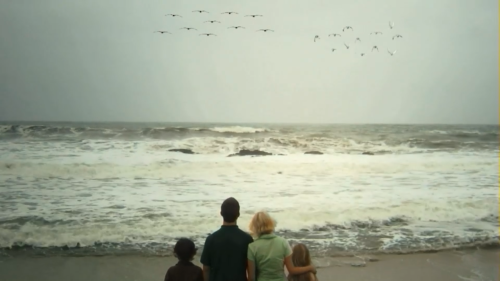 A new Reading Rarity is on the way Tuesday. Thanks for reading, all…

Birdemic is available on DVD and Blu-ray from Amazon. It’s also free to stream for Prime customers.