In that jam-packed year of 1939, there were so many winning movies, too many to list here. The Wizard of Oz. Gone With the Wind. Mr. Smith Goes To Washington. Dodge City. The Private Lives of Elizabeth and Essex. Dark Victory. Just to name a very few. The only film we’re interested in today, though, is Stagecoach. This John Ford western combines grit, fortitude, and a muscular cast for an experience even those who don’t normally watch westerns might enjoy.

The film starts in Monument Valley, where the locals have been having trouble with the Apache tribe attacking stages. Everyone has been feeling the pinch, including the Cheyenne, who go to the area’s fort to ask for help.

Life has to go on, though, and the busy stage routes are still operating at full capacity. As a matter of fact, a stagecoach is about to depart for Lordsburg. Its driver, Buck (Andy Devine) wants to get going because Marshall Curley Wilcox is going to pay him extra money for letting him ride along. A certain outlaw, the Ringo Kid (John Wayne) is loose and Curley wants to catch him. Buck has a wife to support, and any little bit helps.

Before that goes, however, we get a glimpse of the bustling town of Tonto, as well as our traveling companions. Lucy (Louise Platt) is on her way to meet her husband, who’s in the Army. Reverend Samuel (Donald Meek) is a nice, steady fellow who’s on his way home to his family in Kansas City, Kansas. Hatfield (John Carradine) is a local cardsharp and scoundrel who has his eye on Lucy. Ellsworth (Berton Churchill) has to hand-deliver a telegram. Doctor Josiah Boone (Thomas Mitchell) is leaving town because he drinks too much and his landlady has thrown him out. Last but not least, Dallas (Claire Trevor) is being run out of town because the Law and Order League seems to think she’s a woman of ill repute.

Lucy’s friend, Nancy (Florence Lake) warns her not to travel because she’s not well. She shouldn’t go anywhere without a doctor, and the Apaches might attack the stagecoach. Ellsworth’s wife, Mrs. Gatewood (Brenda Fowler) cautions Lucy not to ride anywhere with “that creature,” meaning Dallas. Lucy is determined to press on, though. She wants to be with her husband, and it’s only a few hours. Anyway, there’s a doctor on board. Mrs. Gatewood’s nose wrinkles.

The group is barely out of town when the famous Ringo Kid holds them up and Curley has to arrest him. Ringo’s not such a bad guy, really, he’s just in trouble with the law, and he sits down on the floor of the stage coach while he visits with the other passengers, most of whom seem to know him. 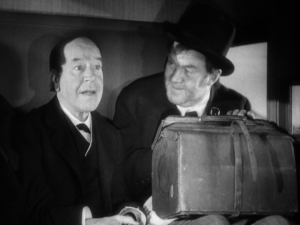 That’s the funny thing about Stagecoach. It’s kind of like The Breakfast Club in that it’s a group of seeming disparate types who are thrown together in a somewhat contained environment, and each character unpacks their story as they spend more time within the group.

What’s unusual is that everyone seems to know everyone, but they still have to behave to type. Sorry, Dallas, you’re getting kicked out of town. Tough luck. Sorry Ringo, I have to arrest you because you’re supposed to be in jail and you just tried to hold up a stagecoach. Then everyone settles back and waits for something to happen. 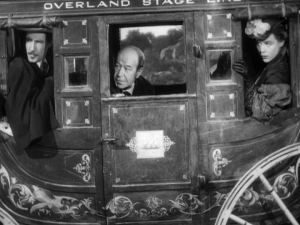 Which it does. The characters have several opportunities to decide whether they want to keep going on their journey or not, and they unanimously decide to keep moving forward. Sometimes they have no choice but to delay, such as when Lucy goes into labor. She was keeping her pregnancy a secret by strategically hiding her shawl over her tummy, and everyone is shocked that she’s with child. Dallas helps her deliver the baby, a little girl whom Buck dubs Coyote because of the coyotes howling outside the night she was born.

What helps keep Stagecoach interesting is that the characters are allowed to break out of their boundaries and show other sides of their character. Dallas, the woman of ill-repute has a heart of gold and bonds with Lucy over the birth of her child. Hatfield, the apparent scoundrel, is Lucy’s knight in shining armor, looking after her and making sure she has what she needs. Ringo is one of the protectors of the group, treating Dallas like the lady she wishes people could see. Doc puts down the his whisky bottle to be the great doctor he was meant to be, although he picks it up right after Coyote was born to toast her birth. None of these characters will arrive at their destination in the same way they left Tonto, and they hang together in spite of their seeming differences.

Stagecoach is a mythic film in its prestige, but it’s also mythic in its realism. The film was shot in various locations around California and Arizona, and it has dust and grime to spare. I suspect they used a real stagecoach, of course, although it would have been much more cramped for the actors to ride in than it was for the Victorians it orignally carried, seeing as Victorians were generally shorter. I can’t imagine riding in one of those things pregnant like Lucy was–that would have been a nightmare.

Based on a short story by Ernst Haycox Stagecoach had to be heavily tweaked to satisfy the Hayes Office, who didn’t take too kindly to Doc being a drunk and Dallas being a prostitute. Ergo, the film’s Doc is an amiable drunk who can quote Shakespeare and sober up quickly when need be. As for Dallas, the film never says flat out that she’s a prostitute but just hints at it, such as when Dallas climbs into the stagecoach and doesn’t care that her ankles show. 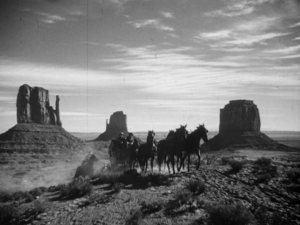 Even if her part had been altered a bit, Claire Trevor gives a beautifully sensitive performance, wonderfully matched by John Wayne, who makes her feel as if she’s worthy of respect and care. Speaking of the Duke, Stagecoach was one of the first movies to show Wayne as a force to be reckoned with.

Wayne earned it, too, as John Ford was a jerk to him on the set, and that’s putting it mildly. According to TCM, Ford shook Wayne by the jaw and told him to act with his eyes, not his mouth. Amazingly enough, Wayne did as he was told, and the film made him a star.

Wayne wasn’t the only target of Ford’s ire; Andy Devine and Thomas Mitchell were on the receiving end of his wrath as well. However, Mitchell knew Ford’s weak spot: Mary, Queen of Scots, Ford’s famous failure. Mitchell only had to play that card once and Ford backed off.

The film was a tremendous success. It garnered a Best Score Oscar and a Best Supporting Actor for Thomas Mitchell. Some aspects of it are dated today, such as when the wife of one of the Mexican workers at a fort shows up and Ellsworth gasps and calls her a savage. However, it’s also considered the Bela Lugosi of westerns–every film in the genre has referenced some aspect of it in some way, and that’s no small feat. As Roger Ebert once wrote, “Stagecoach holds our attention effortlessly and is paced with the elegance of a symphony.”

This is the second of two posts for Clean Movie Month 2020 at Pure Entertainment Preservation Society. Thanks for reading, all, and see you on Sunday with another post…

Stagecoach is available on DVD and free to stream from Amazon.

2 thoughts on “We’re Off To Lordsburg”