Remake Fever in Hollywood is definitely not a new thing, and one of the great parts about being a film blogger is finding out movies I thought were stand-alone works actually weren’t. One of these is The Sea Hawk. Mentioning this title usually brings to mind Errol Flynn, but it turns out that he wasn’t the first one to play the role of the seagoing powerhouse. That distinction goes to Milton Sills, who took up the part in the 1924 silent epic. Is it better than the 1940 movie? Well…we’ll see.

Sir Oliver Tressilion (Milton Sills) is living the life of Riley on his seaside country estate. He’s a war hero who won his stripes when he helped defeat the Spanish Armada. Now Oliver has nothing to do but lounge around and pet his dog. He’s got it made. He’s also set to be married to Lady Rosamund Godolphin (Enid Bennett), who lives with her guardian, Sir John Killigrew (Marc McDermott) on a neighboring estate. 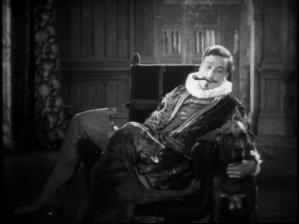 Rosamund’s brother, Peter (Wallace MacDonald) has a short temper and an even shorter liking for Oliver. He thunders over to Oliver’s house and calls Oliver a coward and a privateer. Oliver takes great offense. He makes a beeline for Sir John’s house, where he demands satisfaction. Oliver and John whip out their swords and lash away, but John soon gets pinked despite having the high ground.

Oliver’s lady is shocked and horrified, even though her fiancee fought her guardian as a matter of honor, and she makes Oliver promise not to duel again without coming to her first. People pleaser that he is, Oliver promises, even though this idea is sure to be tougher in practice than Rosamund knows.

Boy howdy, is it. While Oliver’s in town having his horse shod, Peter rides up to him and tells him that until Oliver gives him satisfaction, he’ll horsewhip him every time he sees him. He corners Oliver’s brother, Lionel (Lloyd Hughes) on the road, but is killed in the resulting swordfight. Lionel rides home, faint with his own wound and also worry, because people will think he murdered Peter.

Not so fast, Little Brother. Fingers point to Oliver, and Rosamund agrees with them. She’ll even go so far as to accuse Oliver herself in the courtroom. However, Oliver has an advantage. If he killed Peter, there’s a good chance he’d be wounded himself, isn’t there? When he shows Justice Baine (Lionel Belmore) that he is, in fact, a clean man, there’s nothing the powers that be can do but back off.

Even though he’s basically innocent himself, Lionel still feels guilty as sin, and he makes a deal with Captain Jasper Leigh (Wallace Beery) to kidnap Oliver and sell him to the Moors. As drama would have it, though, Captain Jasper’s ship, the Swallow is intercepted by a Spanish galleon. Jasper is clapped in irons and Oliver is turned into a galley slave, where he toils for six months. Among the trips he has to power is a pilgrimage to Naples by the Infanta of Spain, who complains that the slaves all stink.

Oliver does make a friend, though–a kidnapped prince named Yusef Ben-Muktar (Albert Prisco), whose countrymen just happen to be looking for him. Oliver and Yusef not only break out of their prison, but they’re rescued by Asad ed-Din (Frank Currier), the Basha of Algiers. Unfortunately, a sniper kills Yusef and Oliver responds by taking the guy out with a crossbow.

Naturally, Oliver is incredibly grateful to Asad, and he’s really angry at western society for permitting slavery, so he goes to Algiers with Asad and establishes himself as the Sea Hawk, master of the oceans. He becomes incredibly rich, well, richer than he already is, and Captain Jasper is his faithful second in command. Oliver, who’s known as Sakr-el-Bahr in Algiers, is held in high esteem by most, envied by a few, and looking to settle a score.

The Sea Hawk finds out Rosamund is supposed to marry Lionel, so his next exploit is to go to England and send Jasper in with a note for Rosamund. She is, maddeningly, still angry, so she burns it. Like any ardent lover, though, Oliver crashes the wedding and kidnaps Lionel and Rosamund. 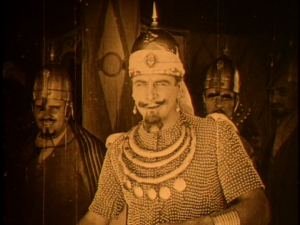 How it all ends is pretty complicated, but the film ties up the proverbial loose ends nicely. There’s comeuppance aplenty, there’s betrayal, and there’s a really good hugging scene.

So…what’s great about this movie? The Sea Hawk is very sprawling and epic. The sets look amazing, as do the costumes. There’s no effort to pretty up the movie when things go south, either–if it needs to look grimy and sweaty, it does. It’s sumptuous. It’s exciting. It draws the viewer in.

There’s some good humor in it, such as when Peter tells Oliver he’ll horsewhip him on sight. Oliver’s response to that is literally, “Go home, Peter, you’re drunk.” If memes existed in 1924, that line would have graced all kinds of GIFs.

In another scene, Lionel goes to see the (married) woman he’s enamored with, and the two of them are making sheep’s eyes at each other when her other beau shows up. Lionel strides off in a huff while his ladylove throws a tantrum. The scene serves no other purpose than showing that morally loose Lionel likes the ladies, but it’s a fun scene, anyway.

The Sea Hawk has a distinct lack of ham, although Lloyd Hughes hints at it. Enid Bennett is sparky. Wallace Beery is Wallace Beery–his trademark drawl is almost audible even though it isn’t.

The real highlight of the movie is Milton Sills, who gives a beautiful performance. I’d like to see more of this guy because his range is great, and he’s not over the top about it. Everything he thinks is all over his face and he really carries the film. 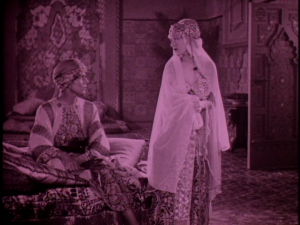 It’s a good thing too, because if anything can be criticized about the movie, it’s that there’s too much story. The Sea Hawk‘s two hour run time isn’t a problem so much as there are a lot of hints at possible plot development that don’t really happen. Like in Algiers, there’s a woman named Fenzileh (Medea Radzina) who’s jealous of Oliver and wants to ruin him, so she starts whispering in ears, starting with Asad. She also has her hunky young adult son, Marsak (William Collier, Jr.) ingratiate himself to Asad to undermine Oliver. It might work, except that Marsak and Oliver become good chums after some friendly target practice with their crossbows.

Don’t get me wrong, the movie isn’t bad. It just can’t get very deep anywhere because there’s plot that must be trodden upon. It’s a lot of fun and shouldn’t be missed. 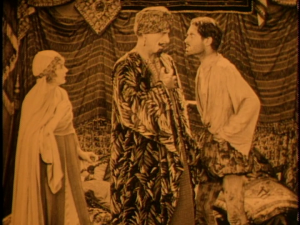 And now for that lingering question: Is the 1924 Hawk better than the 1940 Hawk? Yes and no. It’s kinda hard to say either one is better when the only thing they have in common is the title. They were both made by Warner Bros. and both feature epic sea battles, Other than that, there’s nothing. Not even the character names are the same. I do think the 1924 movie is more exciting with a more intricate plotline, and Milton Sills is a way better actor than Errol Flynn. The 1940 film seems a little bland after watching the 1924 one. However, both movies leave their mark in their own way.

We’ll be delving into a new Amazon Prime movie tomorrow. It’s rather…explosive. As always, thanks for reading, everyone, and have a good weekend…

The Sea Hawk is available on DVD from Amazon.