For someone who was the pinnacle of Broadway success, Florenz Ziegfeld didn’t actually appear onscreen all that much as an actual character. Maybe once or twice, but that was about it. Oftentimes he was just an offscreen presence and his show was aspriational for many hopefuls. Other than that, he was basically a mythical creature.

One person who saw this firsthand was Irving Berlin, whose songs were featured in countless Follies, and then woven into the 1948 film, Easter Parade. It’s a pretty classic backstage story of love versus ambition and priorities rearranged, with the fabulous Judy Garland and Fred Astaire presenting some of Berlin’s best pieces from the early part of the twentieth century.

Don Hewes and Nadine Hale are a successful song-and-dance team who have every possibility in front of them, but Nadine walks out on him to sign a solo contract with Ziegfeld. Don is disappointed but tries to be non-plussed about it. Nadine’s gone? Psh. He brags to his friend, Jonny (Peter Lawford) that he can replace her with any girl out of any chorus line and do just fine. Better than fine. He won’t even notice Nadine is gone.

True to his word, Don casts his eye on Hannah Brown (Judy Garland), a chorus girl at a dive bar, and gives her his card. He wants her to come dance with him for one-hundred fifty dollars a week. Hannah thinks Don is a masher, but Mike (Clinton Sundberger) the bartender tells her he’s legit. He is Don Hewes, after all. 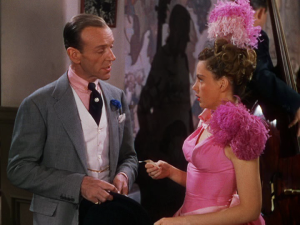 Hannah starts working with Don, who wants her to be Nadine 2.0, except that he calls Hannah “Juanita” for some reason. He picks out Nadine-like clothes for Hannah, who’s not too crazy about feathers. Don wants Hannah to be alluring and attractive to men on the street.

Only thing is, Hannah isn’t Nadine. She’s pretty but goofy. When Don has her walk down the street to see how guys react to her, she makes faces. Still, Don tries to press Hannah into Nadine’s mold. Their first performance is awkward–Hannah keeps bumping into Don and her dress keeps shedding feathers.

Jonny can’t bear to watch Don fall flat on his face, so he tries to get Nadine and Don back together. Things get a wee bit complicated when Jonny meets Hannah, though, and suddenly he’s fine with Don’s new partnership. He and Nadine are dating on the side anyway, and besides, Hannah is in love with Don. Poor Jonny.

After meeting Nadine and Don for lunch, Don, in a moment of revelation, realizes what’s wrong with his and Hannah’s act: He needs to let Hannah be herself. Um, duh?

Don finds out Hannah can sing, and after a rousing rendition of “I Love A Piano,” they hit their stride. So much so that they get an audition with Ziegfeld. Nadine is in attendance, of course, and she looks down her nose at Hannah. Don realizes this and he turns down a spot in the Follies because he thinks he and Hannah shouldn’t share a show with Nadine.

Turns out, Don is right. He and Hannah keep plugging along, and they get a show written around them. Instead of being one of a crowd of acts, they’re headliners. Their opening night is a huge triumph, with curtains coming down to wild applause. 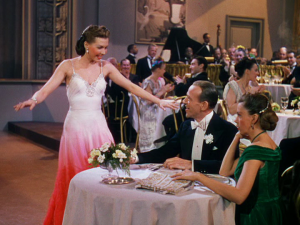 Afterwards they go to the Amsterdam Roof, where the band plays a fanfare for them and everyone turns and looks. Funnily enough, Nadine is performing at the Roof, and she’s the Green-Eyed Monster. Her maid surreptitiously sat in on Don and Hannah’s show, so Nadine is well-aware that she has competition.

Hannah bolts because she’s very insecure about Nadine and Don’s former partnership, but since it’s an MGM musical nothing will stay low for very long.

The bottom line with Easter Parade is that it’s fun. It’s a visual feast of color, tune, and hijinks, with a huge dose of fashion along the way. The Ziegfeld angle is pretty blatant, although we don’t see anyone in outlandish costumes walking downstairs. Instead, Berlin’s music was used to frame women in magazine covers.

There’s more to Easter Parade than fashion, of course. One of the nicest things about the film is that Judy was really able to be herself throughout the production, and it’s obvious that she’s relaxed and having a good time. She gets the giggles at Jules Munshin’s salad-making. She gets silly herself, such as in the “Snookie Ookums” number.

For me, “A Couple Of Swells” is one of the highlights, and there’s a pretty funny story behind the wardrobe in that piece. Judy’s sister, Jimmie told Modern Screen,

{Judy} and Fred were supposed to be dressed alike. He’s not really the torn-and-tattered type, and he wasn’t sure how far Judy would want to go, so he’d try something on and ask, “D’you think it’s too much?”

One day comes a double knock on the door, and there stands a vision. Baggy trousers, oversize coat, crumpled silk hat on top of a fright wig, two front teeth blacked out. “Think it’s too much?” asks Judy, and he falls apart.

Easter Parade could have been very different. Vincent Minnelli was to direct but was replaced by Charles Walters, as Minnelli and Judy were beginning to have problems in their marriage. Don Hewes was originally to be played by Gene Kelly, and Nadine would have been played by Cyd Charisse, only Kelly broke his ankle and Charisse broke her leg. Kelly had to talk Fred Astaire into stepping in for him because Astaire had retired two years previously. Ann Miller, who was friends with Charisse, jumped at the chance to help her out, even though Miller was recovering from a miscarriage and broken back due to former husband Reese Milner apparently throwing her down the stairs.

It was Fred and Judy’s one film together even though the public’s response to their teaming was tremendous. They almost made The Barkleys of Broadway, which of course morphed into Fred and Ginger’s last movie as a dancing team. Royal Wedding might have been Fred and Judy’s second, but by that time poor Judy was worn out and sick, so it didn’t happen.

Easter Parade became one of the top money-makers of 1948, pulling in six million dollars, three times what the studio spent making the film. It also revitalized the careers of Fred Astaire and Ann Miller, who both found a new home at MGM. It might seem funny, but in an indirect way Ziegfeld’s influence still made the difference. Not bad for a guy nobody sees.

For more of the Great Ziegfeld Blogathon, please visit Zoe at Hollywood Genes. Thanks for hosting, Zoe–what a great idea! Thanks for reading, all, and I hope to see you all on Tuesday because it’ll be Reading Rarity time…

Easter Parade is available on Blu-ray from Amazon.