Aaaaand we’re still quarantined in California. I won’t give my opinion of certain people in charge of my state except to say, “Question everything,” and “Consider the source.”

We do have light at the end of the tunnel, of course, but staying inside is definitely having its effects. A couple of weeks ago my dad and I went to Costco and I couldn’t keep from looking around at everything and everyone. I felt like I’d been let out of jail or something. Joking with total strangers was a heady experience. Once-familiar tech now seems foreign, too–I actually hesitated when I approached the self-serve kiosk to buy us some Polish dogs, talking myself through it as if I had never seen a kiosk before. Does that sound odd? I wonder if we’ll know how to act when this whole thing is over.

So yeah, we’re still bingeing on stuff. No so much on TV series and YouTube this time, but lots of movies and Hulu. And Netflix, of course. I was kinda going for variety. Well, sort of. Without further ado, here we go…

Travel and theme park vloggers Tim and Jenn are a nice couple who live in Florida. Obviously travel is out for the time being, so until further notice their channel is home vlogs–lots of cooking, lots of decorating and crafty things, not to mention plenty of time with their adorable baby boy, Jackson. What I like about this channel is that it feels like hanging out, which is something that everyone’s missing these days. The other thing is I’ve always been a baby person, and since the lockdown I think I’ve been going through kid withdrawal. I find myself reacting to Jackson as if he’s sitting in front of me. Weird, I know, but he’s so cute.

As I mentioned in the last “Binge” post, we’ve been rewatching the “House” series (Read my earlier review here). Frontier House was an American production set in the 1880s while British-helmed Manor House focused on servants and upper class living in an Edwardian country estate. These two series, which were produced concurrently, are where the concept of historical immersion TV got big. Really big. With more families involved, the potential for conflict increased. It’s interesting to watch these groups of people in abnormal situations either make or break their experiences. Kinda like life right now.

Obviously there’s no way to binge on a movie, but this 1995 gem is on my watchlist to stay. I don’t think it’s based on the Betsy Haynes novel because the plots are way too different, but I could be wrong. Anyway, sworn enemies Terry and Karen (yes, yes, I know) tangle with each other one too many times and their principal is fed up. So instead of getting sent to a juvenile work farm, the girls have to swap families for thirty days. I used to love this movie in the mid- to late-nineties. It’s dated and very much a TV movie, but it’s still cool to be able to watch it on Amazon Prime. 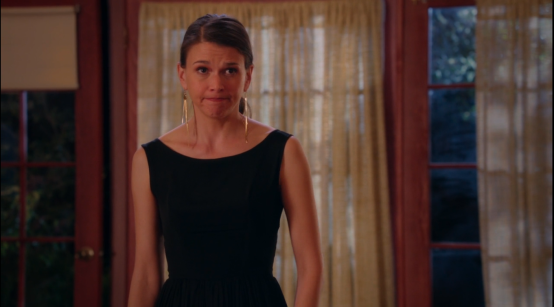 I’m not going to say a whole lot about this one because I’ll do a much longer review of it later. Put it this way: Gilmore Girls fans might want to take a gander if only to tread some trademark Sherman-Palladino territory.

The show, the myth, the legend. Even though we own the entire series on DVD, I’ve been watching Seinfeld on Hulu because lazy. It might have ads, but at least there’s no disc to change. This is another one I’m not going to say too much about because I will be doing a Top Ten list in the next month or two.

The Last Kids On Earth

Okay, so this one was my son’s idea, but it’s really grown on me. It’s based on the Max Brallier series and follows Jack, a thirteen-year old who survives the zombie apocalypse. He lives in a snazzy treehouse complete with video games, a moat, and a ping pong table. He’s not alone, though–his best friend, Quint, former bully Dirk, and Jack’s crush, June are there to make the apocalypse cool. If a murderous creature named Blarg didn’t keep thundering by, the end of the world would be downright placid.

Yep, lots of houses in this gallery of binge. And yep, I know these House Hunters shows are fake but it’s still fun to guess which house will be the winner. I like the International shows too because there’s the added bonus of seeing how people live all over the world. Plus it’s always a hoot to see Americans turning up their noses (or at least pretending to) at how tiny European rooms often are, or the placement of certain expected conveniences. No closets in the bedrooms? The washing machine is in the kitchen? Darned right. We’re not in Kansas anymore, Toto.

If anyone is only familar with the drill sergeant Gordon Ramsey of Masterchef, Hotel Hell and Kitchen Nightmares, his home persona might come as a pleasant surprise. He’s cheery, he’s funny, and he’s very down to earth. The recipes look fabulous, but they’re not unattainably hard. So making the fish sticks. And the meringue. And the shepherd’s pie. Oh, my word. It all looks so good. 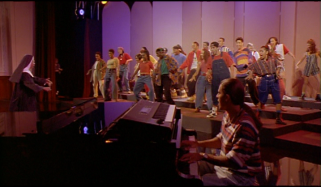 Another one of my son’s ideas. I don’t know why. Guess he just wants Mom to watch more fun stuff. Anyway, it’s been a long time since I saw these movies, so it was cool going back to them. Yes, they’re predictable and unrealistic in some ways, but the music slaps and Whoopi’s awesome. What I get a kick out of is that the choreography in the sequel is very similar to what we used to do on my Continentals tour. Nostalgia galore.

Michael Palin: Around the World In 80 Days

This one’s an old favorite by my favorite of the Python troupe. While all of Michael Palin’s travelogues are wonderful, I like this one best. My excuse for watching it was because there was a hole in the social studies schedule, but I think we would have pulled it out anyway. If anyone hasn’t seen it, I won’t ruin anything except to say that Palin attempts to go around the world just like Phileas Fogg and he can use any method of travel except for airplanes. Does he succeed? Not gonna say. One thing’s for sure: When you travel with a guy who carries an inflatable globe in his bag, nothing is going to be conventional.

Well, there we have it. Depending on what happens in the next few weeks, I may just do another of these posts, but who knows. What have you all been bingeing on?

Thanks for reading, everyone, and see you Friday…

2 thoughts on “The Binge Goes On”