William Randolph Hearst really, really wanted Marion Davies to be the toppermost of top dramatic actresses. Yeah, he looked at this wonderful, natural comedienne and thought, “Hmmm. She must be Sarah Bernhardt. I will make her Sarah Bernhardt.”

Oh, Hearst tried. He tried so hard. Like in 1922’s When Knighthood Was In Flower, when Davies played Mary Tudor. It’s big. It’s lavish. It’s gorgeous. It’s important. It’s also completely wrong for Marion Davies, or it would be if Davies had stayed neatly inside the mold Hearst cast for her.

It’s funny, but the prologue of the film could have been talking about Hearst and Davies, because it mentions a young girl and a brave man who fall in love despite being separated by class and circle. Heh. The only difference is that these two people were both young, whereas Hearst and Davies, er, weren’t. Well, Davies was. And then there’s the untidy reality of Hearst being married to someone else, but we won’t go into that too much.

We first see Mary Tudor (Marion Davies) being punted down the Thames on her sumptuous river barge, and naturally, she looks amazing. She’s installed at court with her brother, Henry the Eighth (Lyn Harding), making her first appearance at a jousting tournament. One of the participants is returning war hero Charles Brandon (Forrest Stanley), who catches her eye and vice versa, and Mary can’t stop staring at him, especially after Charles wins the tournament. Henry is so impressed he installs Charles as Chief of the Palace Guard.

Henry wants to marry Mary off, which Mary isn’t keen on because she feels as if she’s up for sale to men who don’t love her. She also knows Henry is pushing her to get married to score political points. She won’t let Henry walk all over her. And she’ll tell Henry just that.

Yeah, Mary’s mad, y’all, and when Henry shows up to escort her to a meeting with a gaggle of ambassadors, Mary is reluctant but finally goes along with it. At least the court jester is around to lighten the mood.

Henry’s personal pick for Mary is Louis XII (William Norris), King of France, an affable tottering old guy who’s in a wee bit of denial about how advanced his years are. Naturally, Mary is aghast. She’s in love with Charles, who has been meeting with her secretly. It’s all very chaste, though, because Mary’s lady-in-waiting, Lady Jane Bolingbroke (Ruth Shepley) plays the lute while Charles and Mary dance. 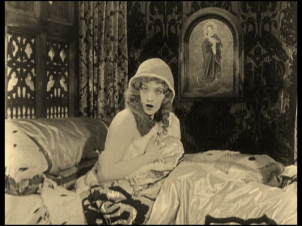 Henry isn’t happy about Mary’s liasons, and wants Charles on a ship to New Spain immediately. He also sends his guards to Mary’s chamber to bring Mary to a proxy wedding. Mary feigns being indisposed, and shocks Henry and the assembled throng by being in her bed without a stitch on. She wiggles her bare toes and everyone gasps with horror. Henry is incensed. Mary throws a pillow at him.

Charles and Mary, the latter of whom is disguised as a boy, sneak out of the castle, but they soon get caught and Charles is sentenced to death. His neck is literally on the chopping block when Henry promises to spare him if Mary marries Louis. Mary has her own card to play, though–she’ll marry Louis if Henry agrees to her picking her own second husband. Henry jumps at the deal, thinking he’s getting the better end of things.

Except he isn’t. Louis tries playing the part of the dashing youth, and gets out of bed against the doctor’s orders. He’s not even across the room before he collapses and has to be carried back to bed. Mary is distraught when he dies, not only because she didn’t hate Louis, but he was her only protection against Louis’ heir, Francis I (played by a very young William Powell). Francis is a creep who sneaks into Mary’s room though secret passages behind paintings. Fortunately, though, other forces are at work that will leave Francis standing on Mary’s balcony, shaking his fist in anger. Oh well.

Davies’s flair for comedy comes through wonderfully all through the movie, such as in the court scene when she meets the ambassadors. She totally doesn’t care to be there and shows it, staring off into space until Henry pokes her with his sceptre. Even then, she makes faces at the ambassadors and feigns yawning. It’s a captivating scene that probably wasn’t planned on but is a treat to watch.

The rest of the cast got in their own schtick as well. When Charles has to get past two palace guards, what does he do but knock their heads together. It’s worthy of a Three Stooges short, except that the Stooges weren’t filming shorts in 1922. Anyway, it totally works even if it is a little out of place in an epic period drama. I probably laughed harder than I should have.

The movie on the whole is likely funnier than Hearst intended, and that was a good thing, because the total cost of making it was $1.8M, or $27.7M in today’s money. Fortunately, audiences loved the film, and it became one of the biggest hits of 1922.

Hearst may have had a reason for going ham with the funds. According to biographer Ben Proctor, Hearst had been busily campaigning for the Presidency, spreading himself so thinly that both his wife and Marion demanded he spend more time with them. Marion was so incensed she threw shoes at his head. To appease both the women in his life, Hearst packed everyone off on a grand European excursion. He put Marion up in a swanky hotel, promising to see her often, which, much to her ire, didn’t happen.

Long story short, Hearst spent a truckload of money on Marion to get himself out of the side-woman doghouse, and one of his expenditures was When Knighthood Was In Flower. He even commissioned Victor Herbert to write “The Marion Davies March.” In spite of all this butter, Hearst still issued the usual dictum to Marion: She was to be a charming, virginal maiden.

When Robert Vignola signed on as director, however, all bets were off. He had a great hand with comedy and he knew what Davies could do. Davies threw herself into the part, even learning fencing for when Mary and Charles sneak away. In the midst of authentic sets a block long, costumes that were dead ringers for the real things, and a story that only plays slightly fast and loose with the facts, she’s still Marion Davies. She plays her role with just enough irreverence to be hilarious and just enough gravity to be believable. The result is an utter joy of a movie that catapulted Marion Davies to stardom and still holds up today, almost a century later.

Hearst may have wanted Marion Davies to be a serious dramatic actress, but he got more than he bargained for. Marion Davies, whether Hearst liked it or not, was a woman with intense talent and enough moxie to slyly pull the rug out from under his all-important dictums. Or throw pillows at them, as the case may be.

Coming up in May:

If anyone is interested in joining one or more of these, these fine folks can hook you up:

All righty, see you on Friday with another silent movie review. Only it’s not completely silent. It’s also pretty wet towards the end. You’ll see. Thanks for reading, all, and hope you have a good week. Stay safe and well, everyone…

When Knighthood Was In Flower is available on a beautiful Blu-Ray/DVD combo from Amazon.

2 thoughts on “Throwing Pillows At Henry the Eighth”