Mr. Price is back…

Vincent Price might have been a horror king, but there was so much more to him. In fact, before horror was Price’s primary acting output, he was known for his suave gentlemen characters of both the sympathetic and not-so-sympathetic persuasions. One of the most interesting, and one of Price’s personal favorites is the 1944 film, Laura, in which he played Shelby Carpenter, an affably weak former playboy who finds himself a participant in a web of murder and mayhem.

The movie opens in Waldo Lydecker’s (Clifton Webb) apartment, where Detective Lieutenant Mark MacPherson (Dana Andrews) is waiting to talk to him. Waldo wants Mark to know how much above the fray he is, so much so that he calls Mark into the bathroom to talk to him while he’s in the bathtub. With a typewriter balanced on a special plank over it and all his writing accoutrements within easy reach. He doesn’t mind Mark sitting there asking him questions while he gets dressed in his immaculate suit with his immaculate pocket square. Presentation is everything to Waldo.

Waldo seems very bent on sticking close to Mark, as he considers himself Laura’s keeper. He won’t say what his interest in her is, except that he says she considered him the kindest and most intelligent man in the world.

Mark’s next stop is Laura’s aunt, Ann Treadwell’s (Judith Anderson) apartment, where he also meets Shelby Carpenter. Ann has her eye on Shelby even though he was engaged to Laura, but she’s quick to say how much she adored her niece. Both Ann and Shelby seem annoyed by Waldo being there, and it’s clear the society set think he’s a pest. He gets told to shut up a lot in varying degrees of elegance. Mark is undeterred, though, and he questions Shelby and Ann pretty heavily, trying to establish motive. Shelby takes Mark and Waldo up to Laura’s apartment to get the key to Laura’s cabin in the country. Laura is present there, but only in the form of a painting hanging above the fireplace. 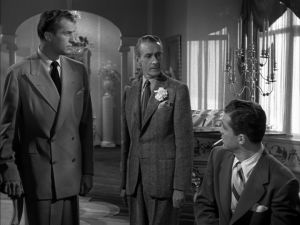 Waldo might be a pest, but he’s a chatty pest. Over lunch in an Italian restaurant, where the two of them sit at his and Laura’s usual table, Waldo tells Mark all about how he met Laura in a restaurant when she worked as an artist in advertising. Laura walked up to him and asked him to sign an ad she designed for some new fancy pens. Waldo doesn’t want to sign, because Laura interrupted his lunch and he’s above pens, even fancy ones.

Laura leaves, highly affronted, and Waldo comes to see her at work. He doesn’t wait to be let in, of course–he just walks to the back all by himself and has a gopher announce him. Laura is cool when Waldo apologizes, but it’s not until he promises to sign the ad that she begins to thaw.

From there, Laura becomes Waldo’s project. He introduces her to higher-ups in the advertising business, and she climbs the corporate ladder rather quickly. The two of them have dinner every night and listen to records. They have a routine.

Waldo is possessive, though, not that it’s any shock. One night at a party, Laura meets Shelby in the kitchen, where he presents himself as a charming fellow who’s lost his fortune and wants a job. The problem is no one takes him seriously because he’s kind of a joker. Shelby thinks he’s not such a bad fellow, though: “I cook. I swallow swords. I darn my own socks. I never eat garlic or onions. What more could you want in a man?”

Laura likes Shelby, so she gives him a job at her ad agency, and they start dating. Waldo is jealous, though, as he is of anyone who tries to get Laura away from him. His usual thing is to ruin his rivals in his column, but he’s not above subterfuge. Especially dirty subterfuge. When Laura and Shelby get engaged Waldo tells her that he found a cigarette case Laura gave him in a pawn shop, with another woman’s name on the receipt.

Mark’s got plenty to work with, but it’s still a matter of he and his fellow law enforcement officers camping out in Laura’s apartment to see how things play out. One night he falls asleep in one of Laura’s wing chairs when the last person he expects to see walks in the door.

No, I’m not going to say who it is, because the less said about the rest of this film, the better. Laura is the kind of movie that wants to blindside people and it deserves to. It’s all worth it.

Vincent Price loved playing Shelby Carpenter. According to the American Film Institute, he even got to sing in one scene–at a party he sat down at the piano and played “You’ll Never Know,” a song that was immensely popular during the Second World War. Unfortunately, the scene was cut from the final release, but it must have been fun to shoot, anyway. 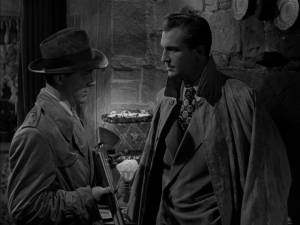 Price’s daughter, Victoria wrote in Vincent Price: A Daughter’s Biography that the cast enjoyed each other immensely. Judith Anderson was one of Price’s best friends duringn the film, and their antics would get kicked off the set every day. Clifton Webb was a good friend as well, and the two actors enjoyed working together after that whenever they could, whether on the stage or on film. Of Gene Tierney, Vincent was in awe–he liked that she wasn’t a cookie-cutter beauty and thought she was immensely talented. Price and Tierney would work together four more times.

Laura is a very graceful, genteel film noir with crackling dialogue and effective plot twists. Amazingly enough, at the time of its release, Laura received mostly “meh” responses from the critics (The New York Times called it “close to being a top-drawer mystery.”), but audiences loved it. In the ensuing decades it’s worn extremely well. Roger Ebert wrote “That Laura continues to weave a spell — and it does — is a tribute to style over sanity.”

For more of the great Vincent Price, please check in with Barry at Cinematic Catharsis and Gill at Realweegiemidget Reviews. Thanks for hosting this, guys–it’s always fun getting to visit with Mr. Price! Thanks for reading, everyone. A new Reading Rarity is on the way soon…

Laura is available on DVD from Amazon.

16 thoughts on “Not the Conventional Type”