Greer Garson didn’t set out to be an actress, although she wanted to. She trained to be a teacher at the University of London, but then started working in advertising in London, with a brief stint at Encyclopedia Britannica. On the side she appeared in community theater, and her talent was so in evidence that one L.B. Mayer signed her to MGM after seeing her perform. Although she showed a lot of promise, Garson’s career found middling success until she made a certain movie based on a new Jan Struthers novel, Mrs. Miniver. The film was very timely and morale-building when it was shown to the public during the early days of the Second World War, and elevated Garson in the eyes of the public.

The Minivers are a happy, carefree family living in the village of Belham outside of London. Clem Miniver (Walter Pidgeon) is a prosperous architect and his wife, Kay (Greer Garson) is a busy lady taking care of her family. The Minivers have three children: Vin (Richard Ney), who’s away at Oxford, ten-year old Judy (Claire Sandar), and four-year old Toby (Christopher Severn). Kay is well-loved by everyone in the village, including the stationmaster, Mr. Ballard (Henry Travers), who clearly has a crush on her. When she comes home from shopping one day, he shows her the rose he wants to name after her.

Everyone is conscious of the approaching war, and even though they’re worried about it, it seems far off and unreal.

When the movie opens, we see Kay splurging on a new hat and Clem splurging on a new car. Vin is due back from Oxford the next day, and the whole family goes to the station to meet him, and then on the long car ride home listen to his long diatribe about how meaningless bourgeois life is.

However, Vin’s musings are broken by the arrival of Carol Beldon (Theresa Wright), who’s come to ask if Kay can persuade Mr. Ballard to withdraw his rose from the upcoming flower show. Her grandmother always runs uncontested and she thinks this new rose presents real competition. Naturally, Carol and Vin spat over this preposterous idea, but Carol’s too nice to get ugly about it. She and Vin make up at the country club dance the next night, where Vin drops all his pretension.

Carol goes off to Scotland for the summer, and the story cuts to September, when the family are in church. The service seems to be normal, except that soon after the call to worship the vicar (Henry Wilcoxon) tells the congregation that war has been declared. He’s quick to encourage the congregation to fight the threat with all that’s in them, “and may God defend the right.”

Belham adapts to war with surprising speed–they’ve already got blackout curtains in place, although no one seems to have built any Anderson or Morrison shelters. Vin joins the RAF, and when he’s transferred to the local field he comes right home and proposes to Carol.

Dunkirk happens right around this time, though, and Carol’s barely said yes when Vin’s called back to duty. Clem has to go assist in relief efforts as well. We never see the battle, because things are also happening at home. There’s a German flyer (Helmut Dantine) who was shot down in the vicinity and he just so happens to turn up in the Miniver garden, where Kay finds him.

The war gets closer to home. Kay, Clem, Toby, and Judy have to spend nights in the Anderson shelter, where Kay reads to the kids and knits a scarf for Vin. Belham takes heavy damage, as does the Miniver abode, which gets hit pretty hard one night.

Vin and Carol get married and have a blissful honeymoon in Scotland. They come back starry-eyed and refreshed just in time for the Belham flower show, which isn’t without surprises. Everyone is painfully conscious of how fleeting time is, especially in wartime, and true to form, things change quickly for the Miniver family.

Mrs. Miniver was a tremendous hit, and helped bolster American support for the war. It also gave Greer Garson her first Oscar, which she wasn’t expecting. She recovered quickly, though, and gave a lengthy speech that some remember being about ten minutes, and others thought was an hour. Either way, Garson had given a beautiful performance as Kay and hit a new level in her career. 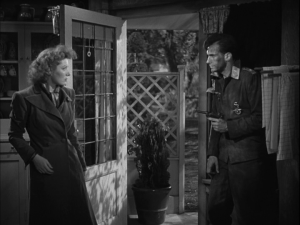 Some odd things came out of Mrs. Miniver. During production Garson struck up a relationship with Richard Ney, who was twelve years younger than she was, and they got married in 1943. The union only lasted four years, by which time both Garson and Ney’s careers weren’t in the best of shape.

Plus the movie hasn’t worn well with the Brits, who look back on the film with some embarrassment. At the time it came out, it was great for morale–Winston Churchill called the movie better a flotilla of destroyers. The vicar’s final speech was translated into various languages and printed on leaflets that were dropped over occupied Europe. 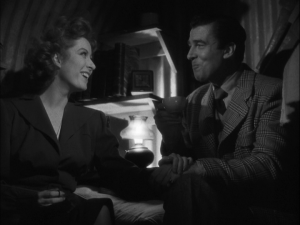 After the war, though, people couldn’t help but notice the difference between the Miniver experience and the reality. They had endured six years of mostly unbroken tension and worry, not to mention the film doesn’t show the austerity that continued in Britain until 1954. Kay Miniver was always beautifully dressed and seemingly without a care. It’s six AM, she’s been completely stressed about her husband and son, yet her makeup is flawless. She’s not breaking her neck to make bandages or join the WVS. She seemed totally disconnected from the average Brit. Walter Pidgeon doesn’t fare so well, either, because of his lack of accent.

To be fair, though, the story is set early in the war when rationing wasn’t as severe, and Hollywood isn’t exactly famous for its realism, particularly in the studio era. When it comes down to it, Mrs. Miniver is a product of its time. 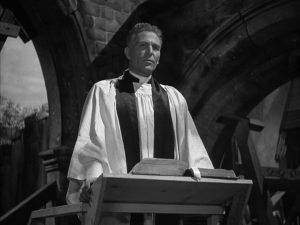 This isn’t a bad thing. As a film, Mrs. Miniver is considered an important part of film history. In 2009 it was selected for preservation by the Library of Congress for being culturally and historically significant. Story-wise, it’s not a bad film. Me, I like the fact that it’s dated because it allows me a measure of connection with a time I missed by thirty-plus years. And that’s cool.

For more of the Rose of MGM Blogathon, please see Phyl at Phyllis Loves Classic Movies. Thanks for hosting this, Phyl–it was fun! Thanks for reading, all, and see you in a few days with another review…

Mrs. Miniver is available on DVD and multi-format Blu-ray from Amazon.

Longmate, Norman. How We Lived Then: A History of Everyday Life During the Second World War. London: Hutchinson & Company, Ltd., 1971.