In my humble opinion, the most iconic villain of the original MacGyver series was Murdoc, played by Michael Des Barres. He appeared on the series a total of nine times, and for one reason only: MacGyver (Richard Dean Anderson) was the only target master hitman Murdoc couldn’t murder. Well, that, and he lived rent-free in MacGyver’s head. After all, it’s not often that a guy gets repeatedly hunted by the same maniac, the maniac seemingly dies almost every time (always yelling, “MacGyver!”, by the way), and no one can ever find the body. Basically, Murdoc was Kenny before South Park.

Murdoc also wins major points for creativity. It wasn’t enough to stalk MacGyver and take cracks at him; Murdoc often devised elaborate schemes to lure MacGyver in, usually involving his would-be victim’s friends in some way. He might be the director of a splashy musical, or set up a sumptuous banquet table in MacGyver’s living room, complete with restraining bolts on MacGyver’s chair, of course. Or Murdoc might steal MacGyver’s Phoenix Foundation identity card and stick his own picture in there. No plot is too dastardly for this dude, and he deals it all out with a gleam in his eye and a voice that veers between menacing raspiness and classically trained silkiness.

It helps that Murdoc is a master of disguise and can imitate any voice he wants to at the drop of a hat. He might be a great guy to have around if he wasn’t such a murderous psycho.

So what would happen if these two characters joined forces? Why would they want to? Well, the series only went there once, in the fifth-season episode, “Halloween Knights,” originally aired on October 30, 1989.

The show takes place on Halloween, of course. MacGyver comes home to find his houseboat completely cleared out, and he suspects his crazy pilot friend, Jack Dalton (Bruce McGill) has struck again. Jack has a history of tricking MacGyver into going on nutty adventures, but this time MacGyver’s not having it. He wants to get some sleep.

MacGyver goes to Jack’s airplane hanger, where he not only finds all his stuff in a heap on the floor, but Jack’s flying wings sitting in what appears to be a pool of blood. Now really suspicious, MacGyver roots around Jack’s desk and finds the phone off the hook, with the last number dialed being that of a cemetery. So yeah, that’s where he heads next.

Once he gets there, MacGyver sees an open hearse parked outside a mausoleum. Inside, he spies a coffin, but he barely has time to whisper “Jack?” before he falls through a trap door. Much to his shock, he finds a fancy Victorian parlor at the bottom and Murdoc, who’s had his scars repaired since he and MacGyver last locked horns. 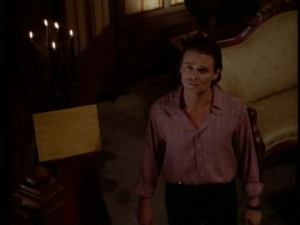 The real shocker, though, is when Murdoc tells MacGyver that his sister, Ashton (Debbie Podowski) is being held hostage by HIT, or Homicide International Trust, hitman firm and Murdoc’s former employer. Murdoc recently decided to retire, which HIT’s not too happy about, hence their going after Ashton. If he doesn’t come back, she’ll be executed by midnight on Saturday.

MacGyver, understandably, is aghast: “You have a sister?”

Yes, Murdoc has a sister. She’s never seen him, but she’s his only relative and to her, he’s a mysterious benefactor. MacGyver’s not buying it and heads for the exit when Murdoc plays the guilt card–MacGyver is free to leave, but he will have the death of an innocent girl on his hands.

Fine. MacGyver will help Murdoc, but only if Murdoc agrees not to use guns or kill anyone. He also needs to provide the evidence to shut down HIT. Murdoc flinches, but finally agrees. He’s dubious about their chances because HIT is all about killing people, but really, he should know better. This is MacGyver we’re talking about, after all.

HIT is fronted by a nightclub, and since it’s Halloween there’s a costume party in full swing. MacGyver rolls a coffin full of candy into the place pretending he’s the delivery guy for some catering company, and conveniently enough, there’s a space underneath for Murdoc to hide in. Both of them are wearing masks because Murdoc is a wanted man, and Murdoc points out who the various HIT board members are. The chairman, Nicholas, always picks a theme, and the key is to figure out what that theme is. They also need to steal Nicholas’s fingerprint somehow in order to sneak into where Ashton is being held. The finally figure out that the four board members together form a royal flush, so they start looking for a king, a queen, a joker, and a jack.

MacGyver crashes the meeting disguised as a joker, which is a nice cover because whenever he’s asked a question, he can clown around and distract people. All it takes is Murdoc cutting the lights at just the right time so MacGyver can swipe Nicholas’s old-fashioned.

Once inside, MacGyver and Murdoc find HIT’s proving ground, a sadistic obstacle course including robotic gangsters and animatronic barbers bearing tommy guns, not to mention a Vietnam-esque scene complete with machine guns and battleground sound effects. They use real ammunition, natch. It’s not enough to get a tryout with HIT–would-be assassins have to make it through alive.

Oh, and the HIT folks know Murdoc just might have a weakness. Yeah, even Murdoc. He hates snakes, and HIT’s obstacle course has a whole pitful of them. MacGyver sprinkles some kerosene on their trousers because snakes apparently hate the smell of it, but Murdoc is so paralyzed with fear that MacGyver has to resort to other measures. 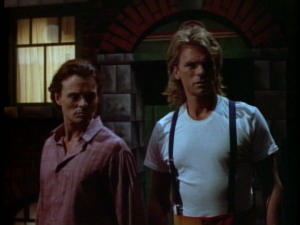 Des Barres’ fear of the snake pit was legit. Originally, the scene called for Murdoc having to step into it himself, but Des Barres was so freaked out that Anderson got the idea of putting Des Barres on his shoulders.

While “Halloween Knights” might be an atypical episode for Murdoc’s character, that doesn’t mean things wind up with he and MacGyver becoming best buddies. The mystique must be preserved, after all. 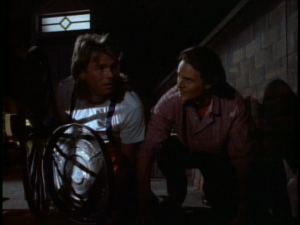 Michael Des Barres loved playing Murdoc. He has great memories of Richard Dean Anderson, who he’s called “the sweetest guy,” and considers the characters of Murdoc and MacGyver to be an effective foil. In an interview with Yahoo! Entertainment, he said, “I brought out the bad, the tension, in him, and he brought out some goodness in me perhaps every now and then.”

Naturally, the character found his way into the reboot, only as the new Murdoc’s former mentor, in the “Murdoc vs. Murdoc” episode, broadcast on February 2, 2018. I’m not a fan of the new series by any stretch because it just doesn’t grab me–there’s no way the reboot can duplicate the interplay that made the original so unique (Richard Dean Anderson dislikes it as well, by the way). It goes back to that cliche about lightning never striking twice in the same spot. However, this is one episode I wouldn’t mind seeing. Everyone seemed to have fun, and that’s cool.

On the other hand, there’s no Murdoc like the Michael Des Barres Murdoc. He brought such an evil elegance to the series, and seeing his and MacGyver’s usual dynamic turned on its head has never stopped being fun, even thirty years later.

For more of the Favorite TV Episodes Blogathon, please see Terence at A Shroud of Thoughts. Thanks so much for hosting this, Terence–it was a blast! A new post is coming up soon, all. Thanks for reading, everyone. Stay safe and well…

MacGyver: The Complete Series is available to own on DVD from Amazon, as are the individual Seasons 1, 2, 3, 4, 5, 6, and 7. The “Halloween Knights” episode is part of Season 5.