Mr. Keaton is back…

Buster Keaton did have a career of sorts in sound films. Well, he tried, anyway. From 1933 onwards Keaton’s life was turbulent. He was fired from MGM in 1933, his marriage collapsed, and Keaton struggled with alcohol abuse. IMDb claims there was a period of time when the public hated him and didn’t want to see him, but as can happen with that otherwise useful site, their facts are incorrect. Keaton’s life was just not conducive to being in features for a period of time, althugh he did appear in an assortment of shorts. Instead, he worked behind the scenes helping other filmmakers develop sight gags. Keaton did return to MGM, though, in 1949’s In the Good Old Summertime, a musical remake of The Shop Around the Corner. While it’s heavily linked to its predecessor and its original source material, Parfumerie, Summertime has its own place in the canon. Only instead of Matuscheck and Company in Budapest, we’re heading to Chicago and Oberkugen’s Music Store.

Even though Summertime is a musical set in a music shop, there isn’t a ton of music in it. What is there are graceful nineteenth-century songs such as “Meet Me Tonight In Dreamland,” and Eva Tanguay‘s perennial classic, “I Don’t Care.” Only one new number was introduced, “Merry Christmas,” that’s since been covered by Johnny Mathis. The bulk of the songs are handled by Judy Garland, natch, who looked like she was having a grand time.

Andrew (Van Johnson) is the head salesclerk at the music shop, and his life has a comfortable routine. Every Sunday he bikes to the park, sometimes with his boss’s nephew, Hickey (Buster Keaton), where there’s always a singalong. His boss, Mr. Oberkugen (S.Z. Sakall) is always there with his cashier and girlfriend of twenty years, Nellie (Spring Byington). Yeah, twenty years. Nellie’s a patient lady. And she works in the shop with Andrew.

When Andrew stops by the post office the next day, he’s pleased to find a letter from his secret pen pal. He doesn’t know her name, but Andrew is in love. As fate would have it, though, he steps outside the post office and runs smack into Veronica Fisher (Judy Garland), smashing her hat. Andrew is apologetic. Veronica is perturbed but somewhat placated when Andrew gives her his card and asks her to send him the bill for anything he’s ruined. Then, by way of inadvertantly adding salt to the wound, as Andrew speeds away on his bicycle, his wheel catches Veronica’s skirt and completely tears it away.

Later on at the shop, Mr. Oberkugen shows his staff a stock of Amboy harps he’s bought, hideous things with a gold head on the top of them. Andrew says no, and the rest of the staff try to be polite, when Veronica comes in looking for a job. Mr. Oberkugen is just about to refuse when Veronica sells one of the ugly harps to a customer.

Andrew and Veronica are at loggerheads from the beginning, even trolling each other while they plug songs, and they get on this way until the Christmas season. One night Mr. Oberkugen gets jealous because he thinks Nellie has a guy on the side, and he has everyone stay late to take inventory. Andrew and Veronica are both nervous because they both have dinner dates that night. They’re both meeting their pen pals for the first time. 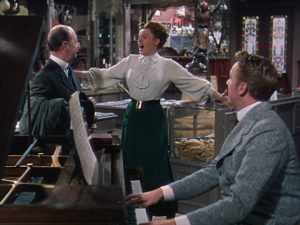 Mr. Oberkugen does come to his senses, though, and our intrepid salesclerks race out of there. They’re in for a few surprises before the night’s out, and anyone who has seen The Shop Around the Corner or You’ve Got Mail knows exactly what to expect. For those who might not, I’m not going to spoil anything.

That’s the thing with this movie–it looks very familiar to those who are familiar with the story. However, the major difference is that In the Good Old Summertime is much more optimistic in tone–the infidelity angle isn’t there, and neither is the suicide one. Andrew loses his job, but how long he loses it is the question. And Hickey may be wanting to squire Veronica around, if he can keep on his feet.

The other difference is Mr. Oberkugen’s beloved Stratavarius, which he can’t play to save his life, but he tries anyway. He enlists Andrew to bring to his and Nellie’s engagement party, but Andrew accidentally lends it to a friend, Louise (Marcia Van Dyke) for an audition. Hickey substitutes a clever fake, and then trips, smashing it.

Other than that, Summertime is a pretty straight remake. A lot of the dialogue was lifted directly from the original Lubitsch screenplay, and it’s kind of interesting to see how different actors interpreted the same material.

The only thing about this movie is that Buster Keaton’s part was not only underdeveloped, but he had to share friend duties with Clinton Sundberg. It’s kind of headscratching. In every other film version of Parfumerie, the romantic male protagonist has one friend who’s both his work colleague and the guy who runs interference for him when it comes time to meet Miss Pen Pal. Not two. That’s goofy. Plus there’s a tiny hint that Hickey’s looking to be the other guy, another thing that didn’t happen in other versions of the story. It feels tokenish and unnecessary.

Keaton deserved to have a beefed-up role, too. According to The Complete Films of Buster Keaton, the actor was originally hired to help director Robert Leonard develop the violin-smashing scene. The only reason he got onscreen at all was that Leonard thought Keaton was the best man for the gag. It was also Keaton’s idea to have Andrew wreck Veronica’s hat and dress, and he taught Van Johnson how to do it properly. So he was a rather major creative influence on the film, and it begs the question: What would Summertime have been like if Keaton had been allowed more screentime?

Well, it would have been more of what he was allowed to do. There would have been more pratfalls and trademark Keaton humor. He and Judy Garland probably would have paired up for more musical numbers than just “Merry Christmas.” On the other hand, MGM may have been reluctant to give Keaton a bigger role because of his past history with alcohol. Keeping things small may have felt like the safer way to go.

While I wish there could have been more Keaton than what we got, it’s neither here nor there. In the Good Old Summertime is a fun movie with great performances and terrific music. We may not get much Keaton out of it, but what the film does have is gold. 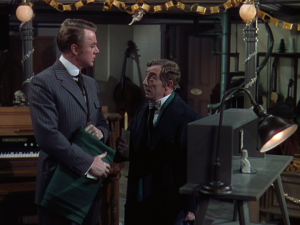 For more of the great Buster Keaton, please see Lea at Silent-ology. Thanks for hosting this, Lea–it’s been fun! Thanks for reading, all, and I hope you’ll come back tomorrow for the 110 Years of Claire Trevor Blogathon…

In the Good Old Summertime is available on DVD from Amazon.