You guys. I’m going to see TobyMac tomorrow. My brother, sister-in-law, my nieces, my son, and my dad are going to be there too, because though a funny “Gift of the Magi”-ish coincidence, we all bought tickets. Oh. My. Word. Can we say, “LIT,” or is that too last-decade?

I’ve been a fan of TobyMac’s since junior high and dc Talk. Heck, I was a member of their fan club, the Vibe Tribe, so I’ve met all three guys a couple of times. It was awesome. At the second meeting, I got hugs from Toby and Michael and exchanged a few words with Kevin. Yes, I have pictures. Somewhere. More about that another day.

The members of dc Talk are commonly referred to as Christian music pioneers, bringing a new sound and edge to an industry that needed a shot in the arm. The Jesus Movement was over, the 1980s were ending, and aside from some unique voices like Steven Curtis Chapman, Amy Grant, Bryan Duncan and Michael W. Smith, Christian music was getting in a rut. I remember there was a glut of Clay Crosse-type singers at the time. Not that there’s anything wrong with that, but it does get old.

Contrary to what some people call them now, dc Talk was not a boy band, but a legit hip hop group that evolved into an alternative rock-hip hop hybrid. In particular, dc Talk’s 1995 album, Jesus Freak was a game-changer. It holds the record for the highest first week sales in the history of Christian music, selling over 85,000 copies and going gold within a month. If anyone hasn’t heard it, I highly recommend a listen, even for those who are not familiar with the Christian market. In my opinion, it’s well on the level of Sgt. Pepper or Dark Side of the Moon.

Before Jesus Freak came Free At Last. The 1992 release won Dove Awards, a Grammy, and spawned a successful hour-long video called Narrow Is the Road. Fans raised the roof when they found out Road would be expanded into Free At Last: The Movie.

Well, we waited…and waited…and waited. Nothing. As it turned out, the fate of the Free At Last movie was a pretty common one. According to Jesus Freak Hideout, the film was supposed to be released in September of 1995, but it languished amid stalled negotiations and was finally abandoned.

Fast forward to 2002. An as-is rough cut of Free At Last: The Movie was quietly released on DVD. A lot had changed by then. While Toby, Michael, and Kevin remain close friends, the group went on hiatus in 2000 and all three have been pursuing solo careers. Still, everyone turned up to provide commentary for the DVD, which was informally hosted by Kevin.

So how rough is the Free At Last rough cut? Very rough. Where the credits would go, there’s just the word, “Credit” against a plain black screen, and much of the footage still has burnt-in timecodes and keycodes. The transitions are probably not as smooth as they would have been otherwise. The audio sounds pretty good, but it may or may not have been mixed when the film was shelved. Who really knows at this stage.

Concert clips take up about half of the film, and it’s a reminder of how riveting a dc Talk show was. I’m not just saying that because I’m a fan, either–these guys knew how to put on a concert. During the Free At Last era, the group used dancers, which was pretty typical for rap and hip-hop acts at the time, and no one ever stopped moving. It was impressive, too–backflips, stage diving, somersaults. Mega calories were burned every night. I remember reading an interview years ago where Kevin compared a dc Talk concert to “playing full-court basketball while singing at the top of your lungs.”

The group began playing some pretty awesome venues at this point in their careers, too. Along with Michael W. Smith, they did a series of crusades with Billy Graham, who referred to them as translators of a foreign language, namely that of the younger set. For their part, dc Talk were awestruck to be in the same space with one of the greatest evangelists in history.

The movie doesn’t exist solely for the live show, though. Its main thread is the struggle Toby, Michael, and Kevin had with balancing their success while staying focused on God. When one’s star rises, one’s ego easily can, too. To combat this, the group took a pastor, Michael Guido along with them. This gentleman not only led everyone on the tour in Bible studies, but he didn’t fail to put the guys in their places if need be. At one point Guido challenges Kevin in particular about being genuine. Is he going to play games with his fame, or is he going to be real with himself and others? The film doesn’t show the whole incident, but someone in the commentary said it ended with a hug.

All three of them had different ways of handling the stress, and one thing was getting out and seeing the different towns they played in. One of the highlights for me was when they were in San Francisco at Caffe Greco, where The Real World just happened to be filming at the same time. dc Talk offered to be in The Real World‘s footage and vice versa, but the MTV folks declined, so the scene is basically these guys having coffee while two camera crews stand around staring at each other. Kevin also makes the mistake of trying to sneak into a psychic’s office and gets chased out by an angry Chihuahua. 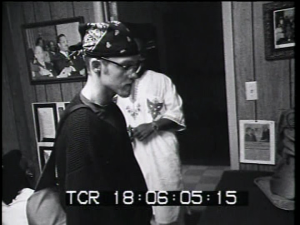 Another part of the film shows Toby, Michael and Guido visiting the 16th Street Baptist Church in Birmingham, Alabama, which was bombed on September 15, 1963. Four young girls died in the blast. All of them were found in a restroom of the church.

Both Toby and Michael were awed and saddened at being in a place where such tragedy occurred, and here Free At Last segues into a discussion of racism. dc Talk is obviously interracial, and the film features a live performance of the song, “Walls,” played over sobering footage from the Civil Rights Era of the 1960s. Far from being bitter over mistakes that have been made, dc Talk has always preached love and reconciliation with a heavy dash of personal responsibility. No one is off the hook when it comes to race relations, and everyone can help with the healing process. 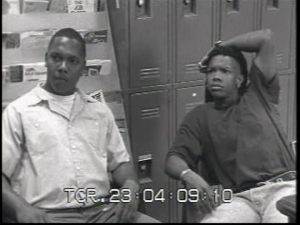 Throughout the film, we see bits of the guys’ home and family life. Michael meets with his brother, Nathaniel, who’s been in and out of prison (he was out at the time the DVD commentary was recorded). Kevin talks about his struggles with being adopted and wondering about his background. Toby’s wife, Amanda talks about how driven Toby is, which his fellow dcT members can attest to–Kevin calls him “Jekyll and Hyde”–but she clarifies that he’s learning to work through that aspect of his character.

Fortunately, all three of them have ways of staying grounded. Besides various people who hold each of them accountable, Toby and Michael both live in the small town of Franklin, Tennessee, which is home to various other Christian artists, while Kevin currently lives in Grand Rapids, Michigan. 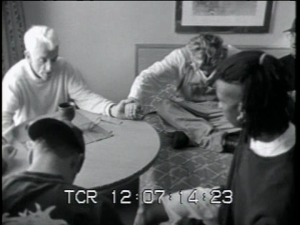 No matter how many safeguards one puts on one’s sanity and accountability, sometimes there needs to be a major reset. While in New Orleans the group went to see the late Brennan Manning, who prayed with them and led them in communion. It’s Manning who basically builds on what Guido already told them: “The greatest single cause of atheism in the world today is Christians, who acknowledge Jesus with their lips, then walk out the door and deny him by their lifestyle. That is what an unbelieving world simply finds unbelievable.”

Fans know this quote by heart, because it precedes a little tune called “What If I Stumble?“. 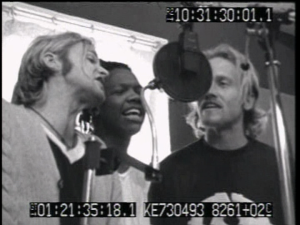 The film winds up by giving us a tiny glimpse of dc Talk recording the Jesus Freak album. We see three men who were weary, who had their worlds broadened, and who came out changed.

While the group is officially on hiatus, they continue to collaborate on each other’s projects, such as this song from Toby’s 2015 album, This Is Not A Test:

Free At Last: The Movie is clearly for the fans. It’s probably not going to interest people who know nothing about dc Talk. However, the messages these guys gave out in their music still resonate, so who can tell? Last year Michael let slip that there’s a tour in the works, and if that happens, Free At Last: The Movie may just find a whole new audience.

Another new review is on the way next weekend. Have a good one, all…

Free At Last: The Movie, Jesus Freak, and the Free At Last album are all available from Amazon.

One thought on “Out of the Vault (At Last)”