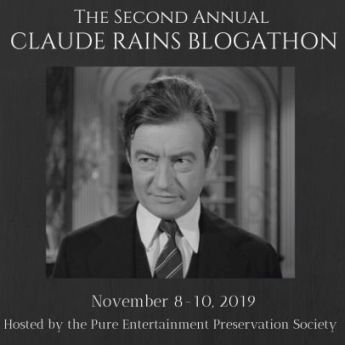 Mr. Rains is back…

Claude Rains had a lot of classic roles, and one of his best in my opinion is that of Senator Joseph Paine in the 1939 film, Mr. Smith Goes To Washington. This movie is well-trod territory for film buffs and Frank Capra fans, and it’s definitely James Stewart’s show, but he’s effectively matched by his fellow Senator.

For those who haven’t seen the film (and what are you waiting for?), it opens with the death of the unseen senator Sam Foley. Governor Hopper (Guy Kibbee) and remaining senator, Joseph Paine (Claude Rains) of Foley’s unnamed state are scrambling to name a successor.

Most concerned of all is James Taylor (Edward Arnold) who is the state’s self-appointed puppetmaster. There’s a big bill that’s set to be voted on in the Senate that concerns Willett Crick, a piece of land he owns and stands to profit from if this bill is passed. Taylor wants Hopper to conscript Horace Miller to take Foley’s place. Hopper resists because Miller is a stooge and everyone in the state knows it, so appointing him would be political suicide. 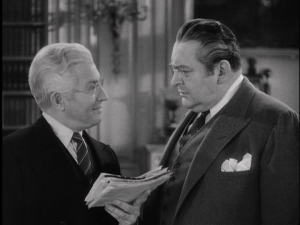 Hopper’s own children have a better idea: Appoint Boy Ranger leader Jefferson Smith (James Stewart). All the kids love him, he’s a modern-day John Muir, and he can quote Washington, Lincoln and Jefferson verbatim. Taylor is resistant at first, but Joseph convinces him that it might not be so bad: Jeff may be so starstruck about being a Senator that he’ll do whatever he’s told.

In the midst of a gala presentation banquet, Joseph finds out Jeff is the son of his best friend, Clayton Smith, a man who was famous for fighting for lost causes. Jeff’s dad was found mysteriously shot while working at his desk, and while on the train to Washington, Joseph fondly remembers Clayton Smith and tells Jeff he’s so much like his dad. 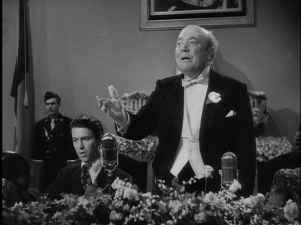 Heh. Little does he know.

At first, Jeff acts true to what Joseph predicted. He’s pretty green, needing help with everything from finding where to go to needing someone to carry his cage of carrier pigeons. Jeff is barely off the train before a group of women surround him and give him kisses. One of them is Susan (Astrid Allwyn), Joseph’s daughter, and Jeff is immediately smitten.

Susan’s got nothing on Washington, though. Jeff spies the Capitol dome and hops on a sightseeing bus, taking in the Lincoln and Jefferson memorials. He spends five hours soaking up Washington’s points of interest while his handlers go nuts wondering where he is.

When Jeff finally wanders into his office, his secretary, Saunders (Jean Arthur) is relieved to see him in her own jaded way. Saunders is tired of politics and all its attendant games and foibles, and she keeps telling her friend, Press Corps member Diz (Thomas Mitchell) that she wants to quit. However, Paine convinces her to stay on in return for more money and a promotion when he takes the next step in his political career. His only proviso is that she not breathe a word about the Willett Crick Dam.

Jeff’s first meeting with the press results in his picture splashed across every newspaper in town, making him look like the proverbial country bumpkin. He’s incensed and goes around punching journalists. Unlike the politicians, though, the journalists are honest with Jeff about what his fellow Senators expect of him: He’s in the Senate to fill a chair and nod like a Christmas tiger when Joseph and the other public servants tell him to get with it.

Troubled by this revelation, Jeff goes to see Joseph, who suggests he find a bill to introduce.

Jeff’s way ahead of him: He’s always wanted to open a national boys’ camp, and he gets Saunders to help him write the bill. She thinks Jeff is a big kid who doesn’t know what life’s about, but she humors him, and he wins her over. Still, it’s tough for her to keep a straight face when Jeff tells her he wants to build his boys’ camp around Willett Crick.

At the next day’s Senate session, Jeff is nervous as all get-out, but not as much as he should be. Old hand Saunders knows what’s up, though, and tells Diz what’s going to happen. Jeff is Don Quixote With Bill. Chick, who’s sitting in the gallery is a gorilla in men’s clothing, or “Puss-in-Boots,” as Diz refers to him. Joseph is the Silver Knight, “soul of honor on a tightrope.” 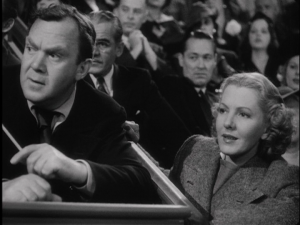 “Diz,” says Saunders, “Don Quixote With Bill will get to his feet in a minute and speak two important words: Willett Crick. When that happens, the Silver Knight will fall off his tightrope, and Puss will jump out of his boots.”

True to Saunders’s prediction, Joseph and Chick lose it when Jeff reads his bill and they both sprint for the exit. Naturally, Taylor has to be told, and naturally, he makes life hard for Jeff with an assist from the press. Saunders watches all of it in disgust and Jeff feels himself cracking under the pressure. 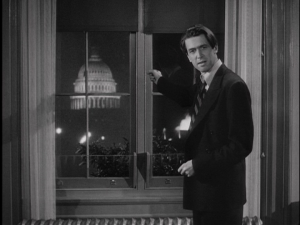 However, this movie famously shows both Jeff and Saunders rising to the occasion in the form of Jeff staging a filibuster. Meanwhile, Joseph is tortured, torn between his loyalty to Jeff’s dad and Taylor having him over a barrel. He also knows his reputation of being honorable and popular is shot if word gets out about his dealings with Taylor.

Frank Capra ruffled a lot of feathers with Mr. Smith. Some senators hated it because they thought it put them in a bad light, and one from Montana apparently walked out. The Press Corps hated it because they thought it made them look like a bunch of drunk buffoons. It was also banned in Spain, Italy, and Germany because of its strong stance on human rights and freedom.

Again, Mr. Smith is James Stewart’s show, and he really found his footing as a serious actor and major star here. His character goes from intelligent but green to passionate and savvy, with tons of support coming from Saunders. It was a favorite film of both Jean Arthur and James Stewart, although the former thought Stewart was acting too cute. Be that as it may, it’s a dynamic performance that today’s young actors can only aspire to, but the odds are excellent that they won’t be able to match Stewart’s sincerity. It takes a lot of integrity and intelligence to play this type of role without seeming whiny.

As for Claude Rains, there isn’t much information out there about how he got the role or anything he did during filming. The part was probably there and Rains accepted it. What I like about his turn as Joseph Paine was that he seemed to be mentoring Stewart even beyond the interactions of their two characters. Stewart looked genuinely awed to share screen time with Rains, and even though Stewart towers over him, Rains’ acting strength makes the two of them equal.

Another strong point is that Rains’ face reflects Paine’s guilt. His face sometimes twists up from the tension between playing it cool and blowing the proverbial whistle. He looks like a guy who hopes he’s above suspicion, but if he’s really honest with himself, he knows he’s been a worm.

Rains was nominated for a Best Supporting Oscar, but as we all know, 1939 was crowded with excellent films. Rains lost the Academy Award to costar Thomas Mitchell, who won an Oscar for his role in Stagecoach. 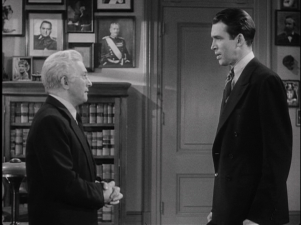 Mr. Smith is an excellent film of depth that beautifully encapsulates American politics, and it works because human nature and Capitol Hill haven’t changed. In every administration, there is at least a degree of corruption, there are always backdoor deals, and there are always people who talk out of both sides of their mouths. It also shows how the cause for liberty requires a vigilant public educated in why governments succeed or fail. The performances of Mr. Smith‘s actors underline these eternal sentiments and help make its lessons compelling.

For more of the great Claude Rains, please visit Tiffany and Rebekah at Pure Entertainment Preservation Society. Thanks for bringing this one back, ladies–it was fun! Thanks for reading, all, and I hope you’ll check back tomorrow for Gill and J-Dubs’s Tell It To the Marines Blogathon…

Mr. Smith Goes To Washington is available on DVD and Blu-ray from Amazon.

5 thoughts on “Walking the Tightrope”