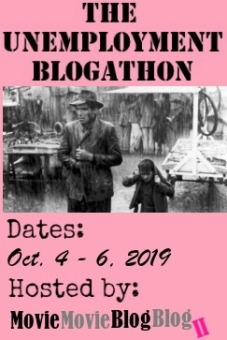 Brother, can you spare a dime?

I’ve been on a John Steinbeck kick lately. In the last couple of months I’ve read Travels With Charley and Cannery Row (again), plus I have Sweet Thursday and The Pastures of Heaven lined up. I think the man was an absolute genius.

We’re all aware of one of his most famous works, The Grapes of Wrath. This Pulitzer Prize-winning novel follows the Joad family as they make their way from Oklahoma to California in search of work. Like many others in the Golden State, I have a personal connection to this story. My grandpa was an Okie who followed the crop picking times, riding the rails to California in 1938, with my grandma (who was born in Arkansas) following him in the car a few months later. The Dust Bowl was over, but my grandparents had other reasons for leaving Oklahoma–work was still scarce, and there were plenty of opportunities in California. Plus, Grandpa’s brother had a business there, which made it easier for them to transition.

As an Okie, Grandpa wasn’t trusted at first, and there were people from other states who did treat him pretty badly, like one fellow from Ohio who took his money and his lunch after pretending to be his buddy. Grandpa didn’t really like talking about what he went though because he thought his kids and grandkids wouldn’t want to hear about it, plus he wasn’t the complaining type. However, whenever he heard us complaining, he’d look at us and go, “Shore is awful.”

That was his catchphrase. It basically meant, “You guys think you have it bad? Well, let me tell you.”

It shut us up pretty quick. Grandpa also said it at family gatherings when the conversation would lag (which it rarely did), and we’d always chuckle. I said it to him myself when I got older and acquired a little mischievousness.

What creeped me out about The Grapes of Wrath was that I could hear Grandpa’s voice in that book. His speech was more refined than the Joads’, but it was a little scary to see how well Steinbeck captured the Okie dialect. I had to put the book down and resume it several times because it made me miss Grandpa.

The 1940 film is a bit easier to swallow. The first thing I noticed was the generic drawl in lieu of real Oklahoma accents, but to be fair, a lot of actors didn’t like doing accents anyway. Plenty of them still don’t, of course (Looking at you, Kevin Costner). 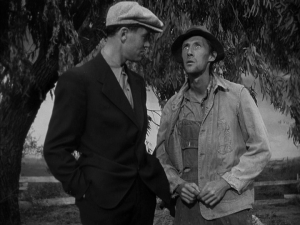 Once I got past that, a lot of things felt pretty familiar. We first see Tom Joad (Henry Fonda) making his way home from prison, where he’s been paroled from doing time for homicide. It wasn’t first-degree murder or anything; Tom killed a man in a bar brawl out of self-defense. Tom meets Jim Casy (John Carradine) a former preacher who says he’s lost the Spirit. He’s not an atheist, but his calling is gone.

Tom and Casy arrive at the Joad farm to find it deserted except for a scared little man named Muley (John Qualen), who tells them the Dust Bowl has driven everyone to California, helped out by the banks foreclosing on their farms. Muley’s house was bulldozed by a local man who was just as desperate to feed his family as Muley is. Even though he’s homeless and his family has gone west, Muley sticks around, calling himself a graveyard ghost. 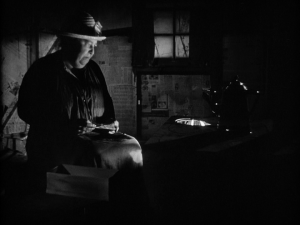 The next morning, Tom goes to his uncle John (Frank Darien)’s farm, where his parents, along with his other relatives are getting ready to leave for California. They ask Casy to join them, an opportunity he snaps up. Grandpa (Charley Grapewin) doesn’t want to leave, so Ma (Jane Darnell) and Pa (Russell Simpson) slip him a Mickey and carry him to the flatbed.

By sunup, they’re off, with the truck sagging under the weight of everything it has to carry and the family smiling as if they’re off to Disneyland and dreaming of fruit ripe for the picking. Grandpa dies from a stroke along the road and they bury him where he died because the Joads can’t afford the funeral expenses. 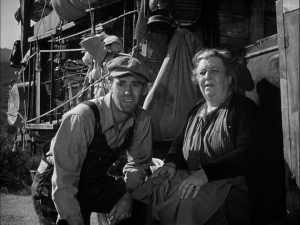 The Joads head along Route 66, and they seem to be making good time. They have a little money, which they’ve planned down to the last cent, and their jalopy always seems to be on its last legs. Grandma dies right as they cross the California state line, but she wanted to lay her head down in California, so she got her wish.

California is both welcoming and uninviting. The Joads meet a police officer from Oklahoma right off the bat (Spoiler alert: It’s Ward Bond), and he warns them it’s not as easy to find a foothold in this supposed land of plenty as they’ve been told. It’s not the first time they’ve been warned about this possibility, as fellow migrants along the trail discussed what was ahead of them, but the Joads try to remain optimistic. 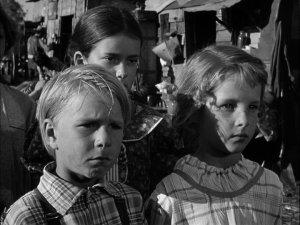 The family pulls into a shanty town, where everyone watches them drive through. Ma makes some stew, and as soon as the smell wafts through the camp, a few dozen children are standing around looking at her hungrily. She barely has enough for the family, but she doesn’t have the heart to turn these kids away, so she tells them to go get some tin cans and she’ll put the leftovers in them. They swarm over the pot like bees to honey.

It doesn’t take long before the Joads have to move on, because they find out the police are going to burn out the camp. So they move on, and find another job picking peaches. This farm is run like a prison camp, but at least they’re able to eat and have a roof over their heads.

Unfortunately, they have to move on again, because of one thing and another, and no, I’m not going to spoil anything. All I’ll say is that the Joads find they do have friends. Their next stop is Camp Wheat Patch, which Steinbeck based on the real-life Camp Weedpatch outside of Bakersfield, California. It has a school and a post office, as well as real sanitation facilities and dances on Saturday night. The police aren’t allowed in without a warrant, and the camp occupants patrol the outer borders of the land, keeping everyone safe.

As I watched the movie, I kept wanting the Joads to find their new home, but The Grapes of Wrath stays non-committal. The Joads remain optimistic, though, despite their future being up in the air. They’re the people, and they’ll go on forever. It was the end of the Depression and the beginning of the Second World War, so a touch of cheeriness was sorely needed. 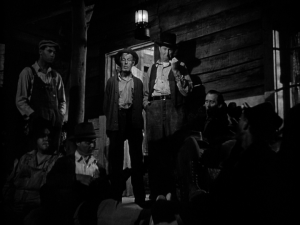 There didn’t seem to be much effort to slick up the film. People are dirty and careworn, with sober, haunted faces, and I suspect a lot of the extras were bonafide Okies. The actors really caught their plight as well, though–Jane Darnell especially looks like a woman who has lost everything and then loses some more. Her face when she finds out Camp Wheat Patch has showers and toilets is quite a study, like she can’t believe the family’s good fortune.

Unlike the novel, Wrath didn’t generate controversy. In fact, it was considered one of the best films of the year, winning a Best Director for John Ford and a Best Supporting Actress for Jane Darwell. Still, seeing such recent history depicted had to be uncomfortable for audiences, particularly those in areas where Okies had settled.

When they first came to California, Grandpa and Grandma moved to Brawley, which is in the Imperial Valley. Initially they lived in a shack built by the farmer who owned the field Grandpa worked in, and my mom was born in El Centro in 1941, the second of four children. They moved to the Bay Area in the early fifties, then to Auburn at the end of their life, where Grandpa died in 2003, with Grandma passing ten years later.

My family is fiercely proud of our heritage and the way Grandma and Grandpa overcame adversity and hardship to become respected members of their community. It helped that people like John Steinbeck were able to see the plight of the Okies and have compassion for them and that movies like The Grapes of Wrath helped the public further visualize what the Okies were experiencing.

For more of the Unemployment Blogathon, please see Steve at Movie Movie Blog Blog II. Thanks for hosting, Steve–it was great! Thanks for reading, everyone, and see you next time…

The Grapes of Wrath is available on DVD and Blu-ray from Amazon.

6 thoughts on “Shore Is Awful”