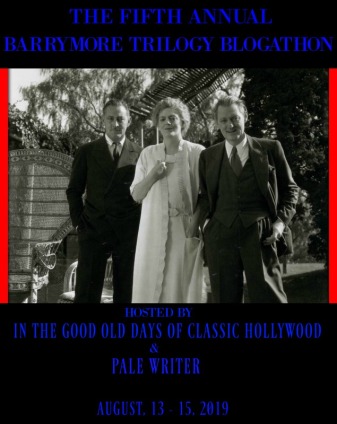 Nice to see the Barrymores again…

Before Gone With the Wind or even Selznik International Pictures, David O. Selznik was a producer at MGM. L.B. Mayer had a vendetta against Irving Thalberg’s success and respect in Hollywood, so when Thalberg was out ill, Mayer installed several other producers at the studio to take away some of Thalberg’s power. It didn’t go unnoticed that Selznik was married to Mayer’s daughter, Irene, and the joke around the industry was “The Son-in-law also rises.”

Charles Dickens novels were pretty safe material for prestige movies, and Selznik decided on David Copperfield. Among the MGM luminaries that were cast was one Lionel Barrymore as Dan Peggotty. Dickensian characters seemed to come naturally to Barrymore–he was already playing Ebenezer Scrooge on the radio, a role he would revisit every year almost right up to his death in 1954. His Dan Peggotty doesn’t have much screen time, but he adds so much to what is already an excellent adaptation of Dickens’ prodigious work. 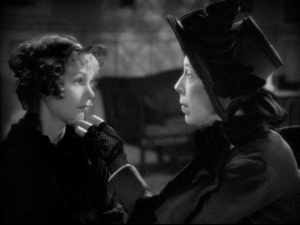 The film opens on the literal first chapter of the book, which reads “I Am Born,” and we see a stormy day in rural England. Aunt Betsy (Edna Mae Oliver) rushes up to a little cottage, where Clara Copperfield (Elizabeth Allan), a distraught widow in the family way, is terrified she’s going to die in childbirth. “Nonsense!” pronounces Aunt Betsey, who is positive the baby will be a girl.

Yeah, well, when the doctor tells Aunt Betsey the baby is a boy, she’s so ticked she hits him over the head with her bonnet before storming off in a high dudgeon. 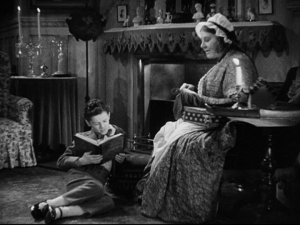 David Trotwood Copperfield (played as a child by Freddie Bartholomew) grows up in a loving environment with his mother and Nurse Peggotty (Jessie Ralph), the latter of whom is like a grandmother to him.

Clara begins dating a Mr. Murdstone (Basil Rathbone), and seems blissfully happy. David, however, doesn’t like Murdstone at all and won’t shake hands with him. Peggotty has reservations about Murdstone as well and says so, but Clara is naive and keeps seeing Murdstone anyway. After a while, she packs Peggotty and David off to visit Peggotty’s relatives, and their carriage is barely away before Murdstone slinks up next to Clara. 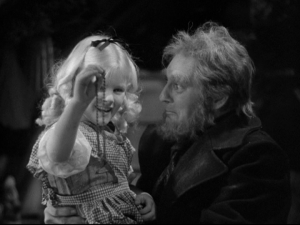 David has a rapturously good time with Peggotty’s family and finds her family to be a patchwork of people who have lost relatives to the sea. Her brother, Dan (Lionel Barrymore) has taken in his niece, Emily (played as a child by Fay Chaldecott) and Ham (John Buckler), a nephew. Emily is a rather daring creature who likes to dance along the narrow planks of decrepit docks, which makes David nervous.

Peggotty’s and David’s misgivings come true when they return home to find Clara married Murdstone. Any cordiality this guy slimed in with has long since evaporated–he abuses Clara and beats David when he doesn’t know his lessons perfectly. Murdstone’s sister, Jane (Violet Kemble Cooper), who looks like death warmed over, has come to stay with them as well, and she yanks the household keys out of Clara’s hand. Clara is too afraid or too spineless to protest, and cowers like a whipped animal. 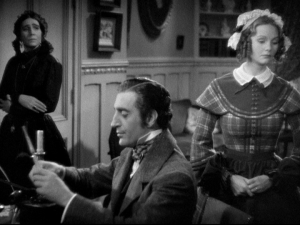 Clara eventually dies in childbirth, and David is left an orphan. Murdstone and Jane send David to London to work in a factory as if it’s some kind of punishment because they hate him and don’t want anything to do with him. Much to David’s delight, though, the family he boards with is named Micawber, and they’re the best people possible for a lonely boy. This family takes David in as one of their own, where he works in a factory with Wilkins Micawber (played with great aplomb by W.C. Fields). This patriarch of the Micawber clan likes throwing around big words and making pronouncements, with a shabby, shrunken top hat cocked on his head.

When the Micawbers have to leave London, David is given sixpence to go to Aunt Betsey’s house in Dover, but before he can really get going, a thief steals both his money and his luggage, leaving poor David to walk seventy-two kilometers. 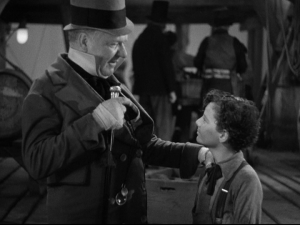 He finally arrives, but he’s hungry, haggard, and sad. Aunt Betsey is brusquely welcoming, deferring to her brother, Mr. Dick (Lennox Pawle) about what to do next because she trusts his judgement implicitly. Mr. Dick is a jolly sort who twinkles his way through life, and he says David should be given a bath. Aunt Betsey shakes Mr. Dick’s hand.

It’s only a matter of time before Murdstone and his sister the Grim Reaper come to take David back. They make Aunt Betsey mad right off the bat by riding up in donkeys, an animal dear Aunty abhors, and she says hello with a riding crop. 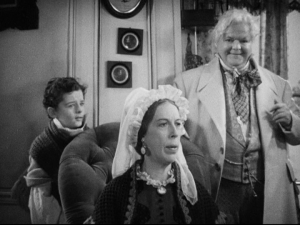 This alone is a fist-pumping moment, but it’s got nothing on the dressing-down Aunt Betsey gives Murdstone and Jane when they finally make it into her parlor. I’m not going to ruin it, but I will say Aunt Betsey reads the Murdstones the riot act like nobody’s business and they can’t deal. It. Is. Gorgeous.

David, of course, has to be sent to school in Canterbury, and Aunt Betsey finds a nice family for him to board with: the Wickfields. Mr. Wickfield (Lewis Stone) is a widower who owns a soliciting firm, and Agnes (played as a child by Marilyn Knowlden and as an adult by Madge Evans) is his doting daughter. David (played as an adult by Frank Lawton) lives with them throughout his school years, right up through university, and he loves them dearly. He excels at school, with Head Boy Steerforth (Hugh Williams) as his best friend and champion. 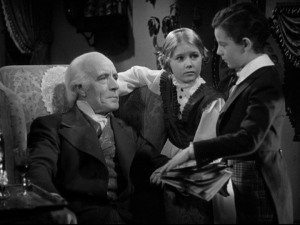 Ah, Steerforth. This guy is a little too smooth and elegant to the point of being as slimy as Murdstone was, and he will turn the Peggotty household upside down. Steerforth deserves what’s coming to him, but no one really emerges as the winner, and Dan in particular looks as if he’ll never smile again.

David doesn’t do very well for himself, either, at least in the relationship department. He meets a beautiful girl, Dora (Maureen O’Sullivan) at a performance of Swan Lake, and he’s absolutely lovesick. They get married, of course, much to Agnes’s grief, but the shine wears off very quickly. Dora is endlessly silly and childish, playing with her dog, Gyp all day long and drawing sketches in the account book. Poor Agnes. 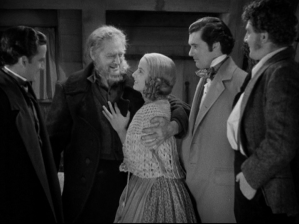 David Copperfield has its tragic elements, but it more than makes up for them, at least for some people. Others don’t make out so well.

One of the less fortunate characters is Dan Peggotty. Lionel Barrymore’s performance as this character is truly remarkable. As the years pass, he goes from being jolly and twinkly to careworn and grieved. Towards the end of the film, his eyes look haunted, almost burning holes in his costars. It’s as if the world has beaten him with a stick and then poured salt on his wounds. 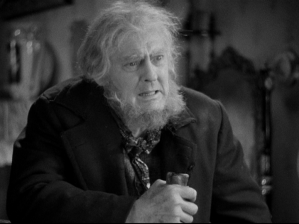 Dan Peggotty was rather minor, and Barrymore’s participation in David Copperfield must have been minimal as well, because there don’t seem to be any cute anecdotes or fun set pictures of Barrymore. Much of the press of the time barely mentions his contributions, although the New York Evening Journal called Barrymore’s Dan “hearty.” Barrymore’s obituary in Variety doesn’t list the film among his credits, either. The omissions are not out of left field, though, as it is David Copperfield’s story. The likely thing is that Barrymore shot his scenes and then moved on to his next role.

Selznik ended up moving on too. The same year David Copperfield opened to rave reviews, he formed Selznik International Pictures, setting up shop in offices at RKO Studios. So yeah, his time at MGM was relatively brief, but the movies he helped make were classic, assisted in part by the once-great Lion and the ever-great Lionel Barrymore. 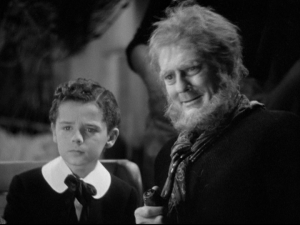 For more Barrymore, please see Crystal at In the Good Old Days of Classic Hollywood and Gabriela at Pale Writer. Thanks for hosting, ladies–it’s always fun hanging out with everyone and the Barrymores! Thanks for reading, all, and see you tomorrow for Gill’s Jeff Goldblum Blogathon…

David Copperfield is available on DVD from Amazon.